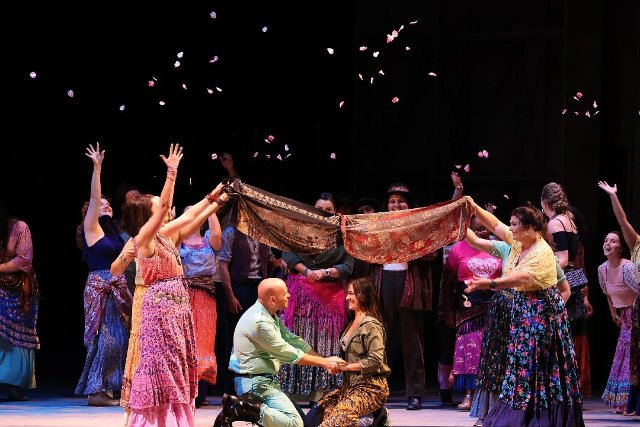 Michael Fabiano as Don José, Isabel Leonard as Carmen. Photo by Curtis Brown.
Georges Bizet’s "Carmen" ranks as a perennial favorite among both opera aficionados and novices.  There are many bases for its appeal, especially its distinctive score with much of it adapted from the folk music of Spain. Paradoxically, its music captures the sense of its locale as few other operas, but because of the proliferation of Spanish culture throughout Latin America and because the story deals with common people, productions often change the setting to other countries, other eras, and even to workers in different occupations.  The story is blessed with an exotic and seductive heroine; a suitor whose bad judgment leads him , astray; and a love triangle resulting in inevitable tragedy.  Santa Fe Opera’s current production of this classic boasts a superb, world-class cast and a production full of eye candy.

Carmen's independence and self confidence set her apart, and her fiery temperament bedevils her.  When arrested for fighting with a co-worker at the cigarette factory, she induces the infatuated soldier Don José to let her escape, for which he receives 30 days in detention.  With Carmen on the run and Don José disgraced, they join a band of smugglers. Their destinies become intertwined and tragedy becomes inevitable.

Carmen’s unrestrained willfulness primes her descent. Her character is unsympathetic because she invites friction by constantly confronting peers, lovers, and authorities. Don José shows weakness by letting his hormones dominate his rationality.  The virtuous Michaëla who he grew up with clearly loves him, but he idolizes Carmen and abandons righteousness altogether.  Although it is hard to sympathize with weak characters, the audience remains engaged through the powerful music and the action.

In its original and traditional conceptualization, the opera is full of Andalusian character with the air of bullfighting, flamenco, and colorful costumes. In an interesting twist, this production sets the bullfighting-relating sequences in a carnival atmosphere. Only Escamillo's costume suggests the sport. But the clever staging and use of revolving sets provide a fresh look by depicting a nightclub in garish red; old-fashioned carnival backdrops framed by light bulbs; a roller coaster; and even Dia de los Muertos designs.

The most controversial treatment is the characterization of Carmen. Isabel Leonard is one of the finest mezzos of her era with a commanding stage presence, but the portrayal that she is directed to perform dilutes the intensity that makes Carmen a magnetic character. She is clad in drab clothes including blue jeans and sneakers, and she is played in a reflective manner with much of the scorching temperament suppressed. With the restrained demeanor, she is depicted more as a victim with much of the vigor sapped from her personality. As a result, Don José's flaws appear more conspicuous, and indeed, he is hot-tempered, violent, and possessive, a profile that any feminist would revile.

A creative lagniappe cut from whole cloth is the frequent appearance of a young girl who observes and dances and mimes. She is reminiscent of the interloping little female figure in Rembrandt's "The Night Watch." The young girl's presence is welcomed but unexplained, though she can be interpreted as a symbol of lost innocence and most likely as Carmen in childhood.

Bizet’s score is studded with memorable arias and duets throughout, mostly reflecting the Spanish folk culture and setting. The connective music is also quite beautiful, though more French. Its creative harmonies differed from the standards of the day and contributed to its rough treatment by critics and audiences in its early showings.

The highlights begin with Don José and Micaëla's "Parle-moi de ma mere" (Tell me about my mother). Michael Fabiano is Don José, and the artist possesses a powerful tenor voice with Italianate inflection that works well in this French language opera as well. Sylvia D'Eramo is Micaëla, and while she is usually played with diffidence and modesty, here she is more assertive, even kissing Don José on the lips when supposedly delivering affection from his mother. The soprano's voice is similarly assertive, and her strong vibrato and power hold up well to Fabiano in her duets with him. And of course, the tenor's voice fills the house like few can, and among other arias, he shows well on "La fleur que tu m'avais jetté." (The flower that you have thrown to me).

As the title character, Isabel Leonard's voice is well suited - a warm, throaty, and resonant melodiousness. She excels in all of Carmen's famous arias like the Habañera “L’amour est un oiseau rebelle” (Love is a rebellious bird) and the equally memorable Seguidilla “Près des ramparts de Sévilla” (Near the walls of Seville).  However, while her vocal tone holds well in her duets with Fabiano, the pair is a little unbalanced as she does not have the volume to equal the tenor.
Other notable numbers abound for the leads, but the second principals deserve mention.  Michael Sumuel as Escamillo does a fine job with the Toreador Song, and Sylvia D'Eramo is captivating as Michaëla, especially in her prayer for courage “Je dis que rien ne m’epouvante” (I say that nothing frightens me) when she seeks Don José in the den of smugglers. The company's choruses which are comprised of the company's summer apprentices (a sad understatement for how talented these artists are) is strong as always, and Conductor Harry Bicket shows deft touch with the musical variety.

The overall feel of this Mariam Clément directed production is very strong.  As noted, many different looks are created by Scenic Designer Julia Hansen who manages the assets and limitations of the house well. She takes advantage of the opera house's unique ability to drop the stage's back wall to reveal the high desert mountain terrain before darkness sets in. Attending the Santa Fe Opera is a very special experience with its singular ambiance, and the city holds many delights. Every opera lover should make the pilgrimage.