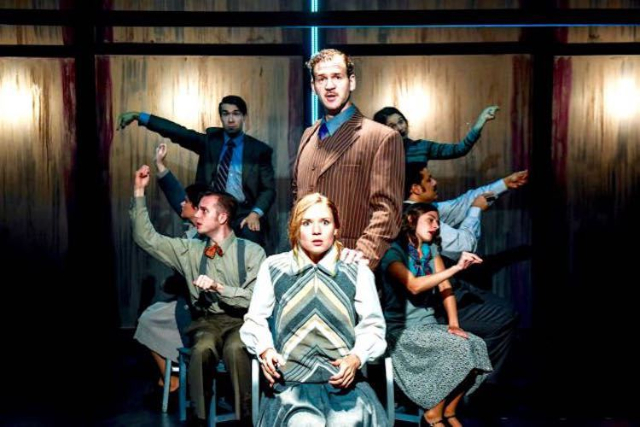 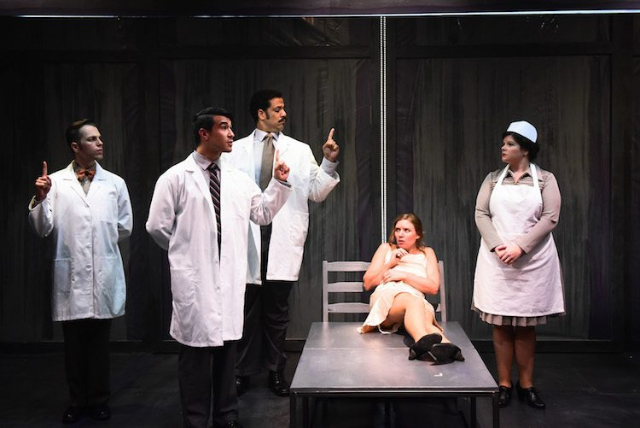 The play opens with a symphony of switchboard operators, those 1920s-era office workers who kept people talking by plugging phones into jacks, greeting and connecting the world outside with the world within. The rapid fire, repetitive dialogue of these six clerical workers punctuates the choreographed action.

It’s the first episode of Machinal, a powerful expressionist play about a 1928 murder case that resulted in a woman being executed in the electric chair.

Machinal, a new production of a neglected 1928 play by Sophie Treadwell at the Greenhouse Theater Center, is stunning in its balletic staging and the nuanced performance of Heather Crisler, playing the Young Woman.

Director Jacob Harvey and movement director Elizabeth Margolius both get top of the playbill credit. Throughout the play, the movements of the characters are carefully choreographed, especially the ensemble members, who play many roles.

Machinal is a splendid visual treat, but it’s also a dramatic story about the Young Woman, who is oppressed by her family, her work and the men in her life. It’s an early feminist story and the elements are drawn from the story of Ruth Snyder, who solved her marital unhappiness with a lover and then by murdering her husband. Snyder and her lover were executed after a sensational trial covered by many famous writers.

The Young Woman, who works at a generic company, is pursued by a vice president (Sean Gallagher). Pressured by her mother (Carin Silkaitis) to marry, she finally agrees. The Young Woman has a baby, in a cleverly staged hospital scene. Never comfortable with Husband, the Young Woman goes to a speakeasy with a friend and meets her Lover (Cody Proctor), who later betrays her.

The title, Machinal, is drawn from the French word for mechanical or automatic, describing the mechanized, materialistic world in which the play is set. The repetitive writing and the stylized production are representative of the expressionist style in theater. It’s marked by a semi-abstract plot and flat characters; the Young Woman is the only character who experiences or expresses emotion.

The 100-minute play (no intermission) is performed in nine episodes or scenes on a minimalist set designed by Eleanor Kahn. The ensemble members (Maddie DePorter, Maddie Burke, Sarah Rachel Schol, Scott Shimizu, Paul Michael Thomson and Jonah Winston) perform many roles as anonymous characters and it is primarily their movement that is directed by Margolius. Lighting design is by Eric Watkins with sound design and original music by Jeffrey Levin.

Sophie Treadwell was a journalist in New York in 1928 and attended the Snyder trial. She wrote the play immediately and it premiered on Broadway in 1928 to strong reviews. After that Machinal was rarely staged until New York and London productions in the early ‘90s and another in New York in 2014. Treadwell wrote 39 plays, seven of which were produced on Broadway, and other works of fiction and nonfiction. Many of her plays presented women’s issues of the day and she produced and staged some of her own work.