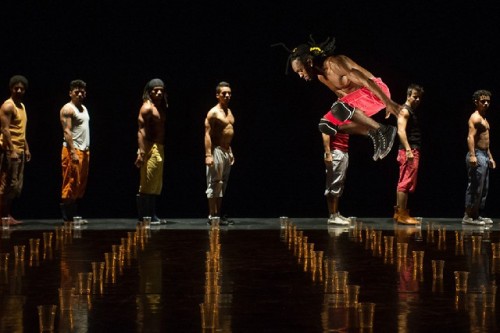 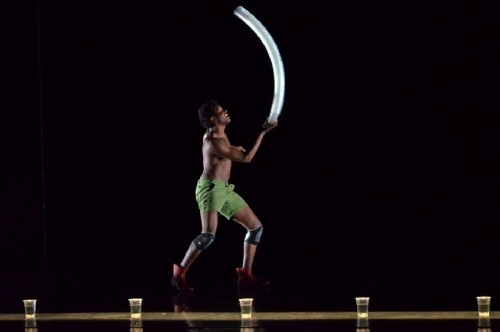 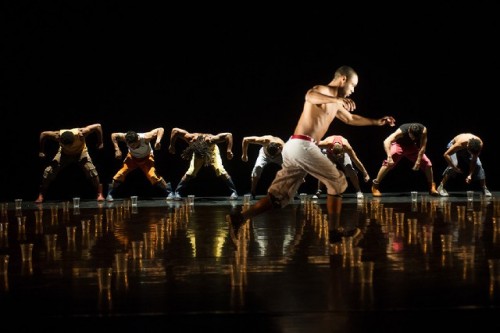 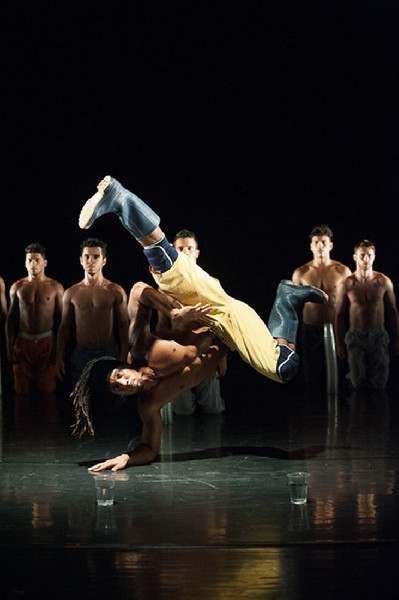 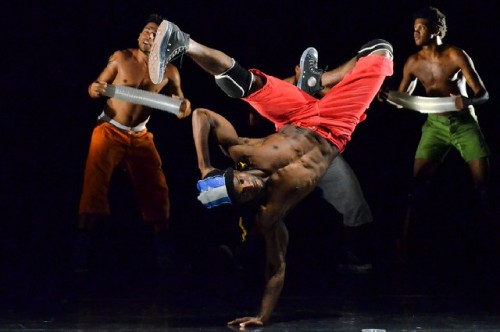 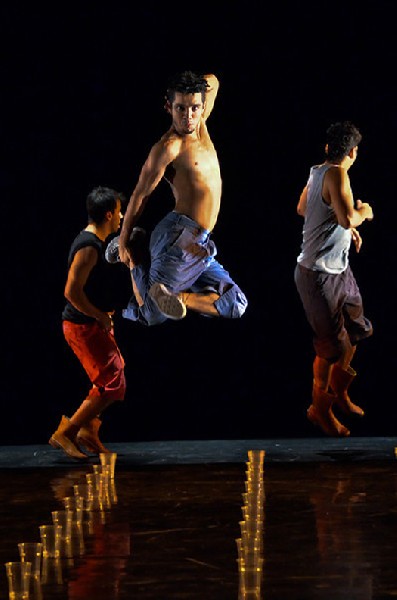 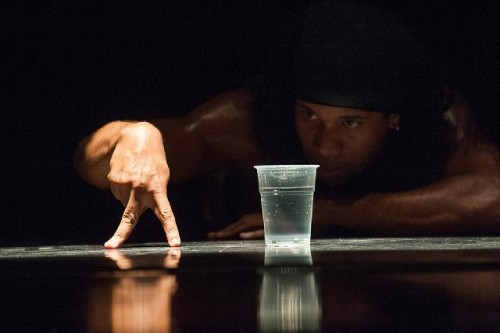 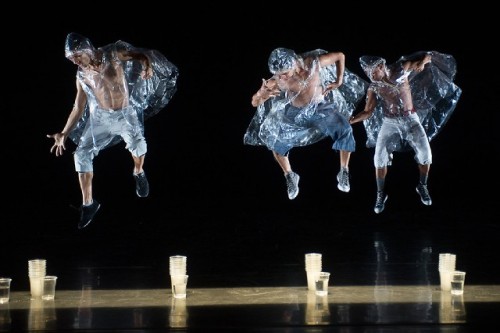 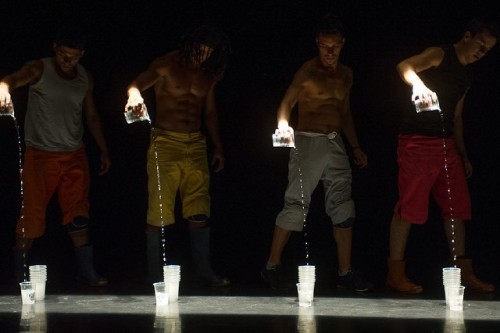 Last night Compagnie Kafig blew the roof off of the Ted Shawn Theatre in their second visit to Jacob’s Pillow Dance since 2001.

Not waiting for the end of the first piece, Correria (Running), the audience constantly burst into applause punctuated by Bravos. They were thrilled by spectacularly athletic moves, flips, spins, body undulations in a dance that conflates many sources including, Hip Hop, Break Dancing, Urban Dance, Samba, Gymnastics, Tumbling, and Martial Arts.

The first piece Correria with an eclectic sound track by AS’N was a collage and mélange of many moods, styles, inventions and possibilities. All melded by the collaborative choreography of Mourad Merzouki. Taking indigenous, self taught dancers  (the eleven are natives of Brazil) he has disciplined them into a taut company.

As we have seen repeatedly at Pillow this is yet another example of transforming folk traditions from bars, cafes, street corners, and social gatherings to the stage of a renowned dance festival. There is the familiar arc of the flamenco of the gypsies, or the tango of Argentine gauchos, Mexican and Asian folk dance morphed into high art.

While the Pillow audience was wowed and floored by this company, most likely, many have seen versions of the moves. Think, for example, of emerging from the Metropolitan Museum of Art and seeing a spontaneous group of dancers, with boom box accompaniment, making their moves, entertaining tourists, and passing the hat (bucket actually). You may have encountered dancers working a crowd in the cavernous Times Square subway stop.

This was the source material that inspired Michael Jackson, his sister Janet, or the ever changing Madonna, in their elaborately choreographed stage routines. Michael’s famed Moon Walk and many other commercialized moves were developed from ghetto/ barrio dance.

Which, in turn, has roots in 19th century American minstrel shows, Harlem night clubs, the Savoy Ballroom, jitterbugging, as well as, the jam sessions and cutting contests of jazz musicians.

The athletic dance of Compagnie Kafig exudes machismo. It’s an art form that is explicitly male. There was partnering as several men held dancers who simulated running with flailing legs. But there were no romantic and sexual overtones. It is quite different, for example,  from when Mark Morris makes a point of men partnering. In that instance he is undermining and even spoofing a romantic balletic tradition.

In the all important aspect of street cred, these phenomenal and demanding moves are about keeping fit and hard bodied, as a form of self defense. Each of the dancers conveys a sense of toughness and don’t mess with me. An elegant move on stage might, of necessity on the street, quickly turn into a defensive whack or kick upside the face.

It is significant that none of the dancers have formal training. It is all learned on the street by watching each other’s tricks and moves. You obesrve and learn, practice and perfect, then go one step further. There is implied competition. This is dance as sport and urban combat.

There is a broad phenomenon as popular culture morphs into high art and established sports. The a capella R&B of the 1950s and 1960s, for example, developed into Rap and Hip Hop which is now a popular and Grammy recognized form of music. Skate boarding and snow boarding are now legitimate Olympic sports. Jean Michel Basquiat took graffiti from the sides of buildings into galleries.

The genius is how Mourad Merzouki has been able to harness and legitimize that creativity and energy while losing none of its invention, audacity, machismo, and spontaneity. Instead of imposing a chorography upon them he has collaborated and taken their special gifts to another, higher level. This is light years, for example, beyond one of those New York street shows. He has managed to stay true to the roots and sources of street dance. It is far more honest and splendid than a Michael Jackson Thriller routine.

Program notes inform us that, since 1996, 17 creations have been seen performed in more than 600 cities in the past 16 years. Compagnie Kafig has given over 2,150 performances in 61 countries for more than 1 million people. Five shows are currently on tour.

The eleven dancers originate from the favelas or poorest neighborhoods of Rio de Janeiro. Now, through art and dance, they have emerged from poverty to become global super stars and cultural ambassadors.

It was wonderful to see so many youngsters in the audience. During intermission I saw a number of them trying some of those moves.

There was a difference between the collage of the first piece, Correria, and the more thematically cohesive second work Agwa.

In Correria there were ever changing vignettes and specialties, featuring several soloists, marked by shifts in the music. It started with the dancers laying down a beat by slapping and pounding the stage with their fists. This gave way to shifts in a percussive sound track that started with Afro/Cuban drumming followed by a sequence with marimbas and cymbals.  Gradually, the music became more complex and sophisticated with Latino guitar/ Samba, Arabic chanting, and then, good grief, an opera aria. This latter was accompanied by a comic dance.

The audience applauded, and enjoyed every individual segment, but I struggled to find continuity in the chorography. The many parts, while utterly enjoyable, did not cohere into a whole. Some elements were magnificently inventive like an exploration of running. While a group of dancers circulated in slow-mo another was in fast forward. Behind him was a video projection that initially mirrored his movement then expanded into a blur of many legs. This figure was seen running through the streets then up a wall leaping into the sky.

In another variation on multi legged running, a group of dancers used shoes at the end of sticks, to simulate a Muybridge-like blur of motion.

The second work Agwa was a single piece inventively exploring all aspect of water.

It opened with a number of translucent, plastic tumblers arranged in patterns on stage. At first, an individual dancer dazzled us by not knocking any over. Then, like the floor exercises of the Olympics, a dancer precisely executed a series of flips across the stage touching down precisely on intervals of empty space.

The cups were then deliberately knocked over and scattered. We focused on a single frenetic dancer speaking plaintively in Portuguese. He was asking for help. Beneath him, in darkness, was a line of dancers crawling across the stage. When the light level came up we saw neatly arranged rows of cups. Most empty but a few with water. Moving forward the water was poured from cup to cup with the extras stacked.

These stacks then took on another configuration as slinky-like, undulations. There were many variations on this theme. We were riveted by the invention and variation.

Then the cups were tossed into the air splattering all over the stage. The audience exploded in applause assuming this to be the end of the dance.

It was just an interlude as they continued to crash about in the now chaotic landscape of cups. They were careful not to disrupt a row of water filled cups at the edge of the stage. Eventually, this line, accented by a narrow beam of horizontal white light, became the focus of attention.

In a line lying down perpendicular to the audience, each dancer was positioned behind a water filled cup. They began to dance with their hands and fingers. This was simply astonishing. It reminded Astrid of the finger puppets of her youth.

It was one of those sublime moments in theatre when you loose all senses of time and space. You become totally absorbed in the spectacle before you in a state of aesthetic, suspended animation.

This dance ended with more than the usual Standing O and chorus of Bravos.

The dancers left. Then one returned. He whipped the audience into a frenzy before being joined by the entire company. This comprised an encore section of spectacular feats by individual dancers with the audience totally into it stomping, cheering, and clapping along. The entire theatre melded into a single, pulsing heartbeat.

It just doesn’t get better.