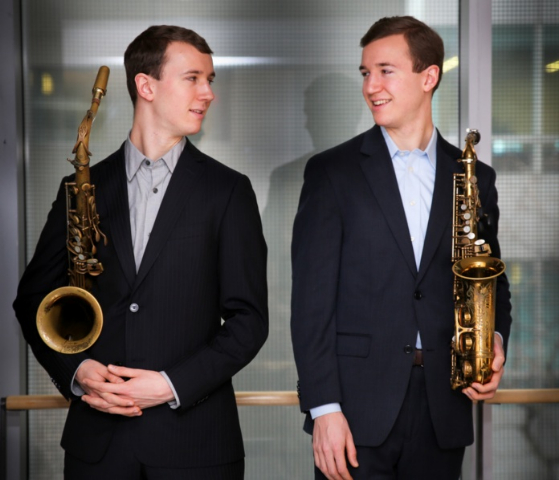 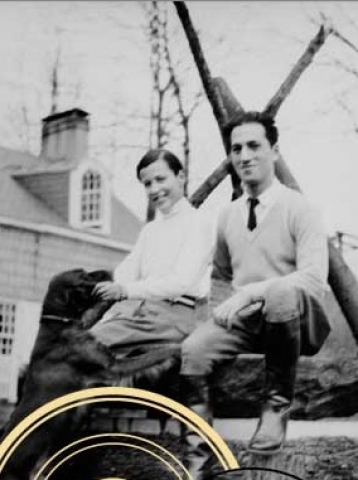 Gershwin and his muse, Kay Swift

The Anderson twins show us that you can double your pleasure and double your fun.  Not only do they banter back and forth as George Gershwin and his brother may have, but they play together, bound by their joy in the music of George Gershwin.

Ninety minutes fly by as we take a tour of the Gershwin career, so much packed into a brief life.

The songs, often written for Broadway musicals and films, still enchant.  Molly Ryan, the vocalist, has a pure voice, full of feeling.  She can etch a memorable line even deeper in the memory.

The Andersons take off through the evening on many instruments. All ranges of the sax, clarinet, and flute are on display.

The live performance is broken up by film clips of the Gershwins' New York life. On the lower East side, like everyone else, they moved from apartment to apartment when a lease was up, twenty-eight times according to the records.

Early on, Ira was appointed family musician, but deferred with relief to his brother when it was discovered that George had talent.  A third brother, a humorist who referred to himself as Unknown Gershwin, also composed a Broadway musical while he was working as a stock broker.

Ira's lyrics are witty and wise.  George had rhythm and melody like few other composers.  We learned that Rhapsody in Blue was written by George on a train from New York to Boston.  It was odd to see the image of Sidney Poitier as Porgy and Dorothy Dandridge as Bess up on the screen of the theater. This is a version of the opera that is banned from screenings for reasons too complex to discuss.

My favorite story about the casting of Bess is housed in the Schomburg Library in New York.  Anne Wiggins Brown was a classically trained singer who came to audition for Gershwin.  She sang Schubert. Gershwin then asked her if she could sing a spiritual.  She said she could not.  After a pause, Gershwin said, I understand. You're hired.

Bridging the worlds between classical and popular music, Gershwin opened possibilities for the future of composition.  Now jazz rhythms could be included and references to the songs of popular culture.

The Andersons provide a charming musical evening with their cohorts joining at the piano, double bass and drums.