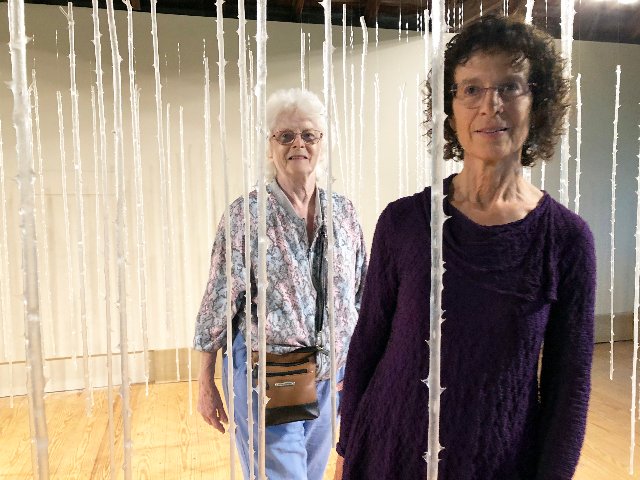 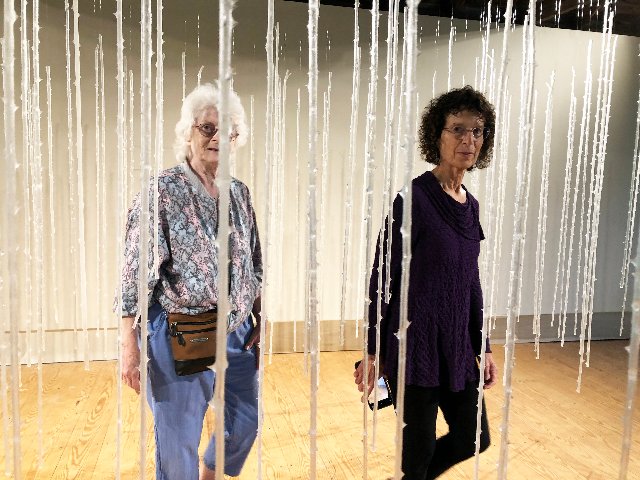 Observe the shadows inside the sculpture 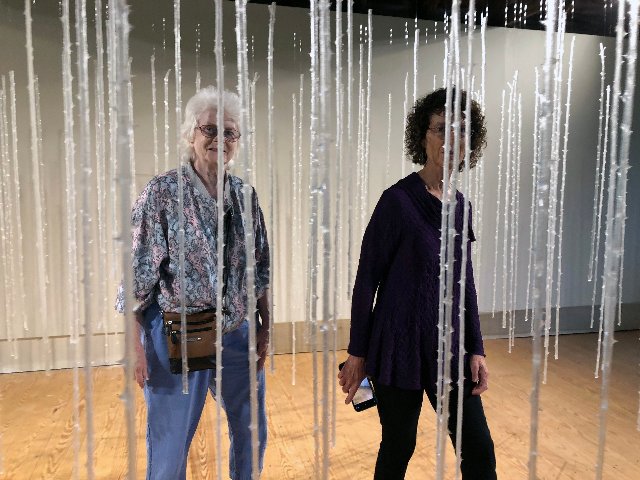 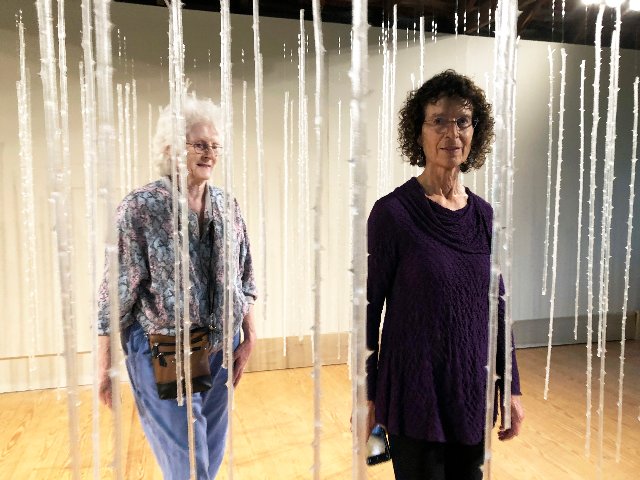 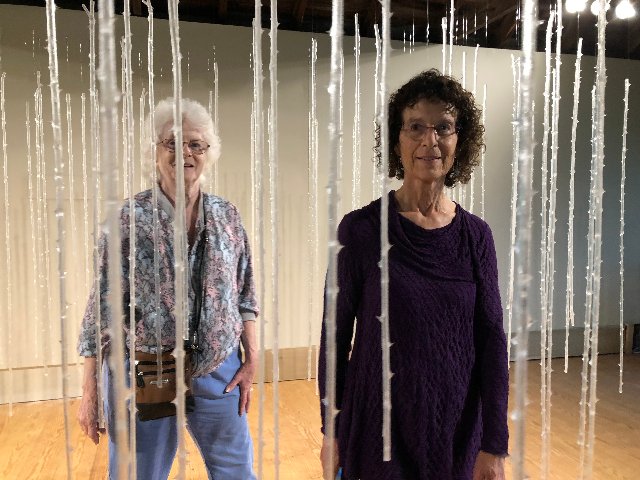 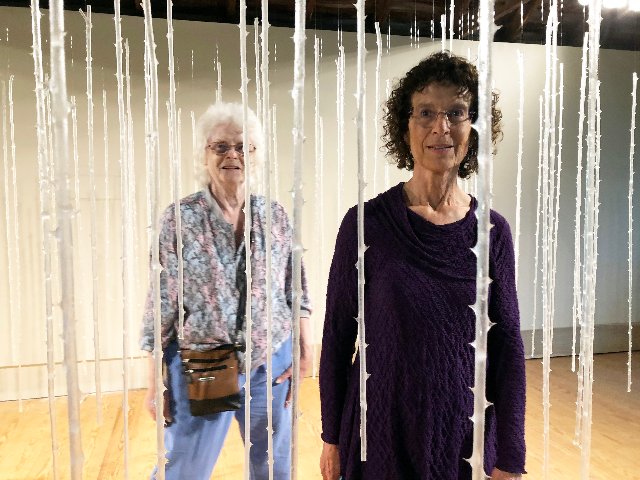 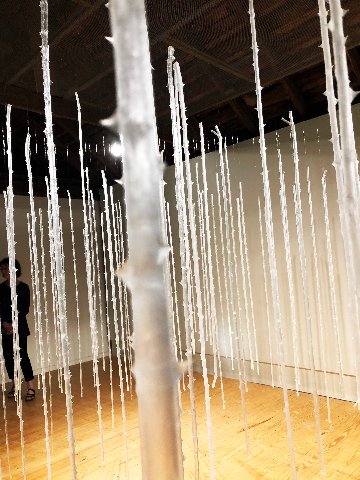 This and next two photos by A.Hiemer 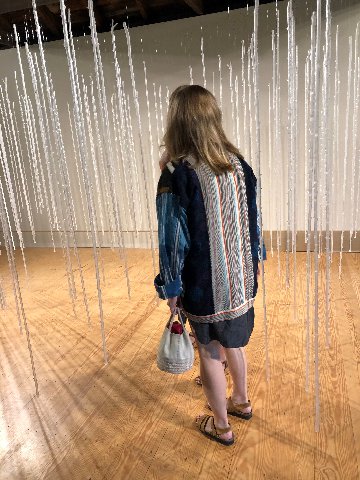 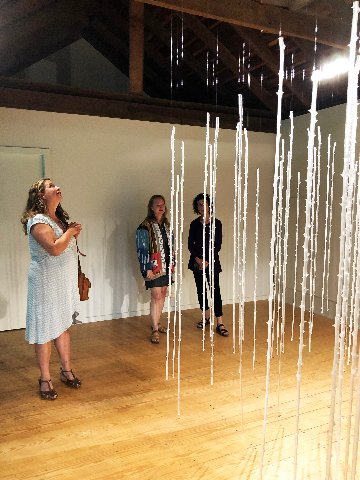 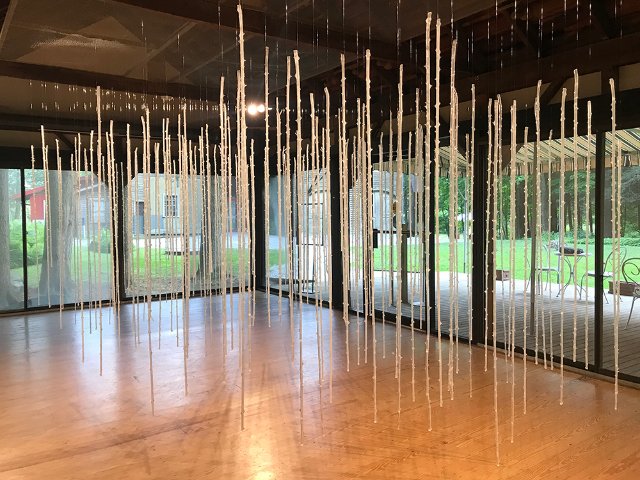 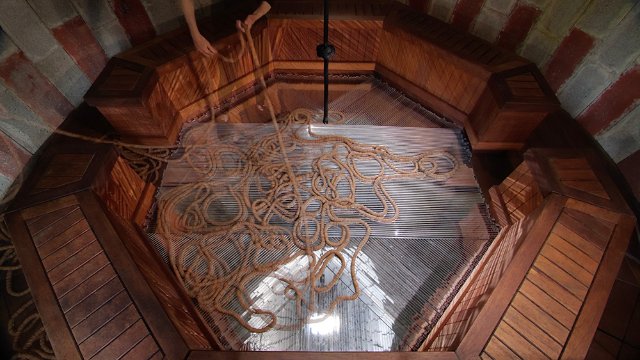 On opening day, August 12, we went on one of our Berkshire country drives to South County to celebrate Beth Galston and her installation, Ice Forest. Covering the Berkshires from end to end, north to South, it will take more than a two-hour drive – just to visit friends in the extended neighborhoods as well as any cultural venues. From our home, we can reach Vermont in 10 minutes and New York State in 20 minutes.

Driving in the rolling hills of the Berkshires is always a summer delight, and we reached Stockbridge in more than an hour, and from there, further away, Chesterwood Museum, the artist Daniel Chester French’s home and studio is still surrounded by woods and pastures. The most famous sculpture of the artist is the Lincoln Memorial Monument in Washington, D.C.

During a week-long residency, the shape of Ice Forest evolved in the pristine elongated glass and wood-sided gallery, which in fact was once a wood shed. Hundreds of translucent very long resin rose stems are suspended to simulate an icy forest. In fact, the molds began with real rose stems, all thorns still intact. The material, the rods, have been installed in various concepts as site-specific works.

Here, looking through the glass doors and windows, one feels compelled to step into the gallery and inside the ‘forest.’ A mutual friend of ours, Sabine Vollmer von Falken urged Beth and me to walk through the sculpture together, which we did. The above series of photographs, taken by a pro, project the icy vibes very well and the Ice Forest appears cooling and perhaps dangerous on a hot summer day. We were glad to meet Jerry Lerman again, Beth’s husband, after many years and the former CAVS Fellow, Mark Mendel, was leaving for a dinner date with his partner Cynthia. Mini meetings from the CAVS community are always welcome.

Another work by Galston is currently on exhibition, Unraveling Oculus, at the Brattleboro Museum and Art Center, VT, until October 10 and is also in easy driving distance. See photo above.

Our acquaintance reaches far back to the1980s at MIT, where Beth received an SMVisS degree and became a Fellow at the Center for Advanced Visual Studies for a number of years. Subsequently she received a two-year Bunting Institute Fellowship at Radcliffe Institute, Cambridge, MA, as well as other fellowships and a National Endowment for the Arts award.

And, of course, her works have also been published and reviewed in the New York Times, the Boston Globe, Art in America, Art New England, artscope and more. The 20th Anniversary book of Socrates Sculpture Park featured her on the cover.

Given the recent incident, an attack on stage, where Salman Rushdie was severely wounded, I remember that Beth and I found ourselves in the audience of a large lecture hall at MIT many years ago. We had come to hear Susan Sonntag, when she announced that instead of her lecture, we would hear another speaker. She said that all doors would be closed, until the presentation would be over. Anybody planning to leave early, would have to step out then. Indeed, the doors closed and two large men in dark sunglasses positioned themselves in front of the lectern and stage, and Rushdie walking in received a warm welcome with great applause. He addressed the audience and read from his then current book, later than the 1988 Satanic Verses. Searching the list of Rushdie’s book titles, I could not be sure. Yet, what an experience!
(We wish wholeheartedly for Rushdie’s full recovery.)

So, when I think of Beth it also reminds me of the Sonntag/Rushdie event. And seeing, feeling and/or becoming part of a Galston sculpture or installation is always a thrilling moment.

Just take in these translucent rose stems that are hung to form an airy and perhaps a danger-lurking work that beckons you nevertheless to step inside.