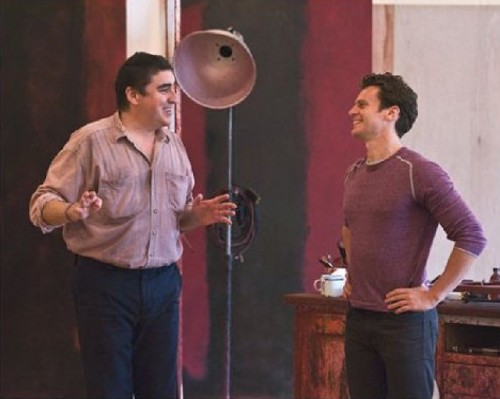 Alfred Molina and Jonathan Groff in rehearsal for Red. 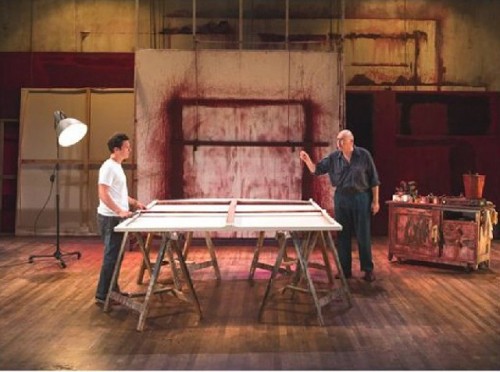 Simulating the studio of Mark Rothko. 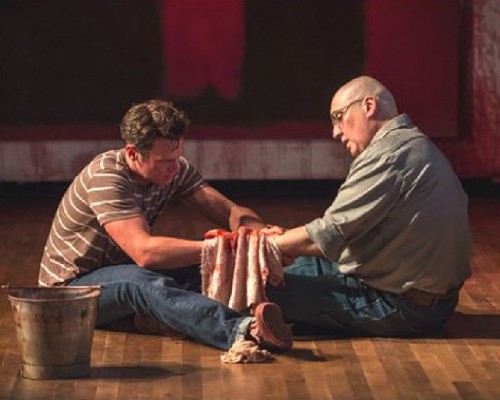 Molina and Groff get down with the work.

When Alfred Molina is on a stage or in a movie, it’s hard for one to take one’s eyes off of him, and when an actor has that strong a presence, a quality that Noel Coward used to call “star quality”, it must be tough on his cast members. In the case of “Red”, written by John Logan, and deftly directed by the formidable and talented Michael Grandage, the “other cast members” in question, is just Jonathan Groff. “Red”, is a two-hander and fortunately for him Molina is a most generous and giving co-star. Together, they become a formidable acting force in bringing the inner-turmoil of the creative process of the late painter Mark Rothko, to the current audiences of The Mark Taper Forum.

“Red” was a break-out hit in London’s 2009 season before moving to New York, with the original cast of Molina and Eddie Redmayne, winning the 2010 Tony for Best Play, for playwright Logan, as well as Tony’s for Best Lead actor Molina, and Best Featured actor Redmayne.

The rationale driving Logan’s story is the need to explore and understand the “creative process” which takes place in his play “Red”. That’s a very tough assignment due to many gray areas within the creative moment. These moments, by their nature, are difficult to define or isolate. Many storytellers have tried to illuminate the linkage between the artist and society. Not many have succeeded. It’s why biopics about the great artists of history fail to fully engage. The struggle is a very personal experience – one that only artists themselves hear and feel. And each artist must march to the drumbeat that each hears.

The first lines uttered by Molina, portraying the late abstract/impressionist painter Mark Rothko, to Jonathan Groff, who plays his new assistant Ken, are “What do you see”? Ken hesitates… Rothko this time gruffly and demandingly barks again, “What do you see?” The question is that of a teacher asking the student a basic question artist to artist.

What we the audience see is an artist’s studio, with various canvases, in various stages of completion, along with the tools of the trade of the painter as artist. The stage is now set for Molina and Groff to engage the audience. For the next ninety minutes we have the opportunity to see not only Rothko’s inner demons, but his artistic philosophy, as well. Ken’s patient acquiescence to Rothko’s outbursts, allows us to watch two consummate actors, Alfred Molina and Jonathan Groff, shape their personal “acting canvases” concerning their creative processes. It’s something all actors do and personally experience every time they step onto a stage.

During the course of the play Molina says to Groff, “There is only one thing I fear in life, my friend … one day the black will swallow the red”. There is a lot of social and political philosophy of that sort that discussed in “Red”. There are also many thought provoking moments raised concerning the role of the artist in society. At one point Ken brashly questions Rothko’s theories of art and his acceding to work on such a commercial project as Rothko’s now famous murals, which he painted for the expensive and exclusive Four Seasons restaurant in New York City.

The play generated mixed reviews in London and New York, as far as the story went, but everyone was in total agreement as to the power and intensity of the two performers, and rightly so.

Fortunately, for all, the creative team is led by director Michael Grandage (he was the director of both the London and Broadway productions) who brings not only continuity to this Taper production, but adds to the richness of the performances. The scenic and costume designs by Christopher Oram, plus a mood-inducing low key lighting plot by Neil Austin, complement Grandage’s vision of this wonderful west coast production of “Red”. Don’t miss it!

Jack Lyons is a California based theatre and film critic. He is a member of the American Theatre Critics Association (ATCA). This review is reposted with his permission from Desert Local News.