An Economy of Means by New Pittsburgh Company 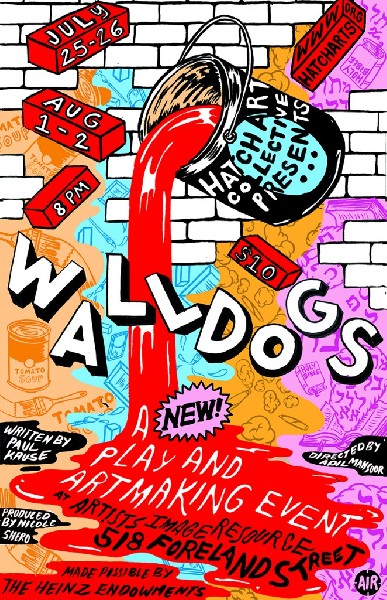 Walldogs, a new play by Paul Kruse, begins after its end, with the erasure of the “writing on the wall” left behind by those who left their marks in the past. We don’t yet know it, but what we are witnessing is, in fact, the erasure of the residue of the play’s previous performance; at play’s end, what is left on the wall will be erased at the beginning of the next performance, in a circular pattern of creation and destruction. It’s an apt metaphor for theater in general (which, however, rarely leaves any such material traces to be erased) and particularly for this short play, which is interested in exploring why people write and draw on walls, even knowing their work will likely be impermanent.

The play interweaves several stories across time and space. In one, an early twentieth century ad painter – a “walldog” – convinces a rural woman to allow him to paint a Campbell’s soup ad on the side of her barn (and finds himself drawn to her in the process); in another, a stressed-out event planner commissions a low-key, methodical urban artist to create a mural for a big fundraiser on a very compressed timeline; in a third, a teenaged stoner graffiti artist offers friendship and kindness to a dorky Jewish boy whose mother has recently died; and the fourth retells, in a kind of hallucinatory dream-state fashion, the biblical story of the mysterious writing on the wall that Daniel interpreted as foretelling the destruction of King Belshazzar and the Babylonian kingdom.

All of the characters are played by two actors, Mallory Fuccella and Parag S. Gohel, who both bring great charm and facility to their realization of the various roles, hitting all the laugh lines in Kruse’s often very witty dialogue. Gohel makes the stereotype of the introspective urban artist ring true, and he is particularly likeable and sincere as the young mourning teen. Fuccella gives the requisite sweetness to the slightly daffy teen graffiti artist, and is pitch-perfect as the nervous and overamped event planner. Fuccella and Gohel make their character transitions the old-school way, through change in posture, voice, and body language, with only a minimum of prop, costume, and lighting help, and the continuity of actor presence between the various stories helps link them both visually and thematically.

Hatch Arts Collective is a relatively new enterprise (they are in their second year of existence), and in this production director Adil Mansoor has made the smart choice to embrace and make a virtue of the company’s poverty of resources. The scene design is simple and spare, foregrounding the play’s “third character,” the wall, and the costume and lighting design are equally pared down. The minimal production values suit the scale of the play itself, which has more of the virtues of a collection of short stories, unified by theme, than that of the novel, with its unifying story or conflict. And like a collection of short stories, Walldogs does not, ultimately, say anything definitive or particularly profound about what it means to leave one’s mark behind on a wall, but rather uses its thematic focus to let us peek briefly into the lives of those who do.

Reposted courtesy of Wendy Arons and The Pittsburgh Tatler.