Reasons to Be Pretty at Geffen Playhouse 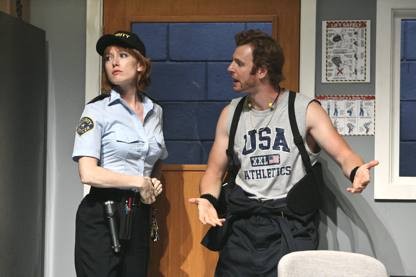 Alicia Witt and Nick Gehlfuss in Reasons to Be Pretty. ~ Photo Michael Lamont 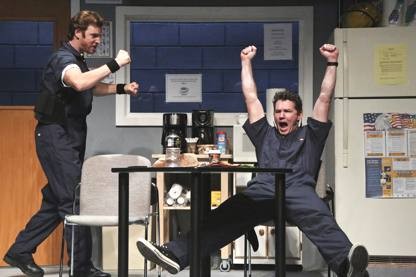 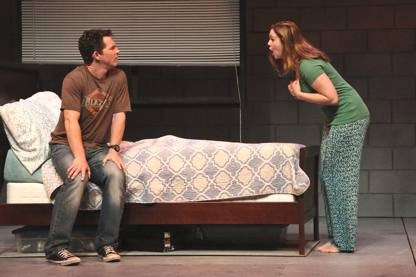 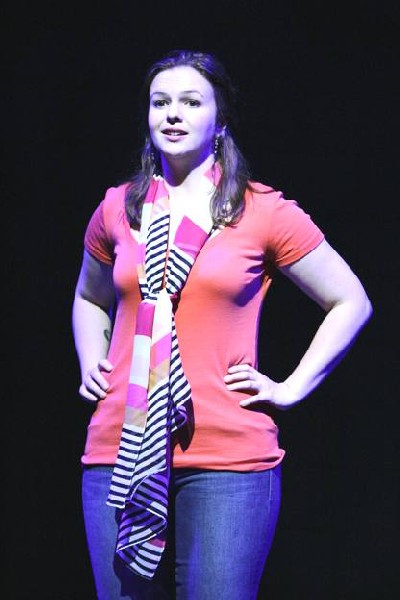 Amber Tamblyn in Reasons to Be Pretty ~ Photo Michael Lamont 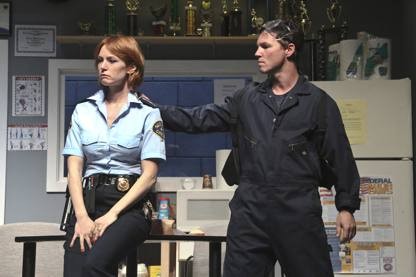 Playwright Neil LaBute is a prolific writer of plays and screenplays.  But he rarely appears on the radar screens of mainstream American theatre goers. Some accuse him of being a misogynistic playwright on steroids.

That label may be a little unfair.  They said the same thing about G.B. Shaw’s take on women, but Shaw performed his misogyny surgery with wit, style, and intellectual rigor, whereas, LaBute assaults his audiences with characters that boast a raw, street smart, approach to the modern man/woman relationship, complete with a plethora of F-bombs, shouted at the top of their voices, and other favorite sexual expressions that pass for dialogue these days.

Scratching beneath the surface of our ever changing society, one will discover complicated and somewhat pathetic characters that continue to hold a fascination for LaBute as well as for others.

In his latest play “Reasons to be Pretty”, directed by artistic director Randall Arney, now playing on the Gil Cates stage of the Geffen Playhouse, LaBute introduces us to four characters in their mid-twenties, who are what some might label as border-line losers.  The younger generation come off as spoiled, self-indulgent, and suffering from a lack of parental oversight when they were growing up.  And, they’re still not grownups when we catch up with them.

The play opens with Stephanie (Amber Tamblyn) screaming at the top of her lungs a series of four-letter expletives directed at her live-in boyfriend Greg (Shawn Hatosy) who is trying to calm her down.  Not an easy task. This is a marital squabble (sans wedding rings and license) between a live-in couple who have trouble communicating.  It seems Greg dropped a casual remark to his best buddy Kent (Nick Gehlfuss), about women in general and their beauty in particular. There is nothing unusual about that, except, that Greg failed to defend Stephanie’s specific beauty, and when the two buddy’s exchanges came back to Steph via her “friend” Carly (Alicia Witt), all Hell broke loose.  Whatever would the world do without gossip as fodder material for writers?

In the case of their friends Kent and Carly and their situation, Carly who works as a night security guard loves her husband Kent.  The issue for them is that Kent has a roving eye for the ladies and for Crystal, a new young hottie at the factory where he works.  The set-up is complete.  Now we wait to see how all this will unfold.  One problem for the audience is that these four flawed characters are not easy to like or to root for.

Director Arney has each character deliver their “Aha monologue” in a spotlighted area straight out to the audience. It’s this convention that gives us some insight into the world of these fallible creatures.  I just wish he took a firmer hand in the vocal modulation and orchestration of the actor’s emotions and delivery.

At times, less is better when it comes to the actors shouting at each other all the time.  Also, there were times when 18 wheeler big rigs would have no trouble slipping in between dialogue cues.

For two and a half hours these talented actors have to maneuver the minefield of LaBute's, sometime raw and sometime banal dialogue which is liberally peppered with references to “beer, broads, baseball, and sex”.  It is almost like being back in my old military barracks.  It was tolerable then, but now fails to engage and just comes off as tedious.

According to LaBute’s program notes, the world is obsessed with how people wish to be seen by others and that’s very true.

Everyone wants to be perceived as being pretty or handsome. Unfortunately, life just isn’t that way. Real beauty is always in the eye of the enlightened beholder.  We can still be happy inside our own skins, despite what the world thinks or says.

The technical credits are always solid at the Geffen, and this production is no exception.  The set design by Takeshi Kata makes good use of wagons in expediting scene locations and scene changes and still provide enough space for the actors to do their things.  Lighting designer Daniel Ionazzi provides just the right amount of illumination for mood enhancement, and still allows for the costumes David Mickelsen to be seen and appreciated.

“Reasons to be Pretty” at the Geffen Playhouse may not be everyone’s cup of tea, but one cannot deny the dedication and the commitment on the part of the talented ensemble cast.  The production runs through August 31, 2014.