Dracula at the Colonial in Pittsfield 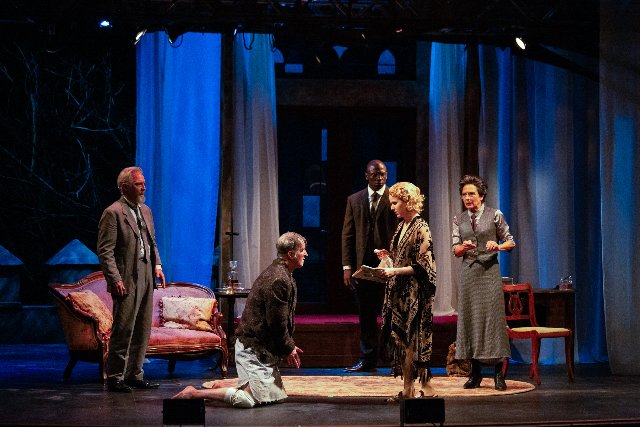 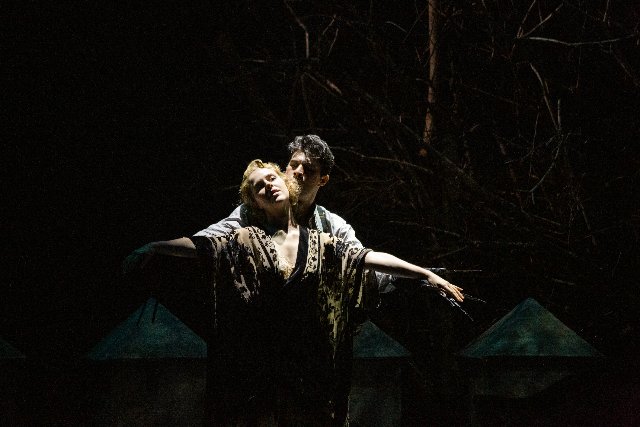 What's a little blood among friends, 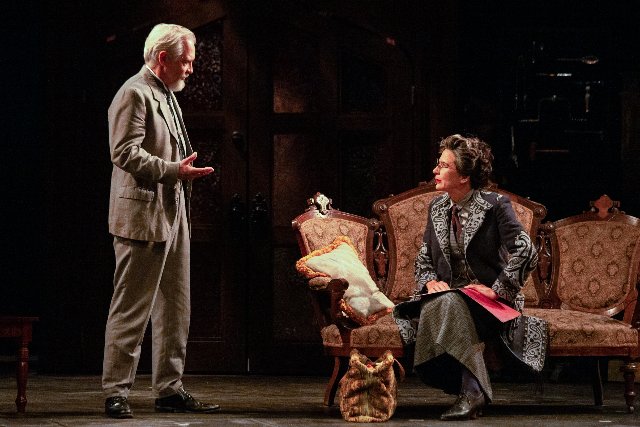 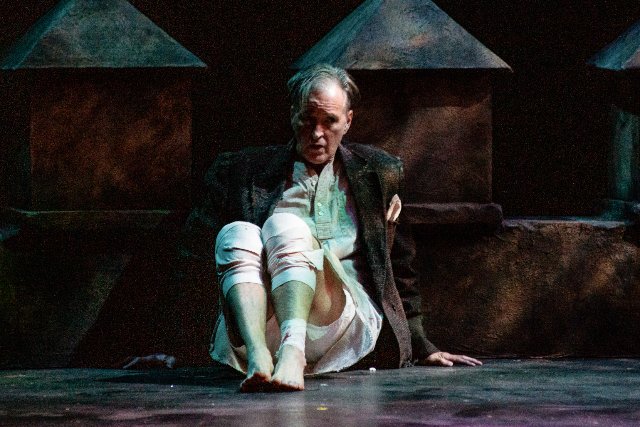 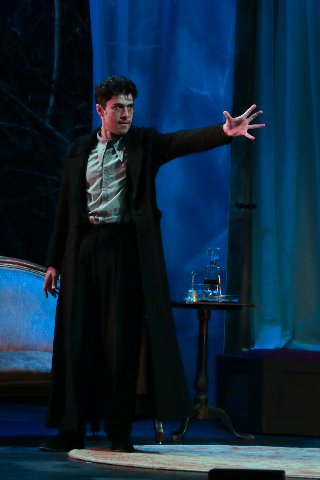 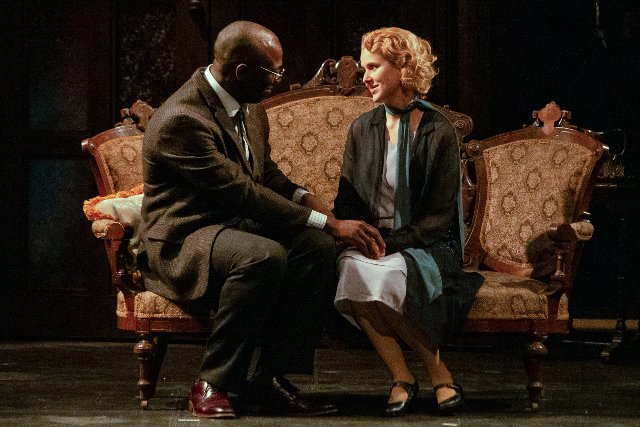 Lucy and her finance.

Lucy (Emma Geer) has been looking a bit pallid of late. All weak and wimpy after nights of bad dreams. A white face with searing eyes hovered over her.

There are those telltale pinprick markings on her neck. Just as they had been on dear Nellie, the Woman in White (Rubielle Nejaime) now passed but undead.

What’s to be done? Her father Dr. Seward (David Adkins) and finance Jonathan Harker (Nome SiDone) discuss and argue over what’s best for her. Both have given blood for transfusions which return color to her cheeks. Only to again be pale as a ghost and weak the next morning.

The plot of Bram Stoker’s Dracula is so familiar that there are really no surprises in the Berkshire Theatre Group production at its majestic Colonial Theatre. But, no matter, this was an evening of purely delicious escapism.

Everything clicks like a cuckoo clock under the masterful direction of  David Auburn who keeps the action fluid and lively in Dr. Seward’s sanitarium.

There is the usual issue of exposition in the first act which is a bit slow. But once it’s game on, the next two fly by in a heady whirl. There is in fact a fourth act as the curtain comes down for a set change. While the characters bumble about in front of it intent on finding the vampire asleep in his coffin.

It seems he flew to London with a cargo of six boxes of his native soil. These are essential to his longevity. They have been placed in a number of safe houses. They must be found and neutralized with holy water. All but one is located.

The action toddles along until Professor Van Helsing (Jennifer Van Dyck), a surprising female casting, bursts on stage with a tsunami of momentum and energy. From her first entrance, Van Dyck owns this drama lock-stock-and barrel.

Her credits reveal that she has worked extensively with the camp master Charles Busch. Her totally over-the-top all out assault in the role is well honed in the manner of outrageous absurdist theatre. She gives a master’s class in how to max out a role.

Particularly, when she is faced off in a death struggle with Count Dracula (Mitchell Winter). First he is not visible in her hand held mirror. Then she slashes her palm and shows him blood. As he lunges at her she wards him off with wolf bane, crucifix, and ultimately, the host. He flies off into the night.

The scenic design by Bill Clarke is all dark wood and gothic revival. That is nicely accessorized with period furniture. The mood is set for the creepy lighting and projections of Daniel J. Kotlowitz. Costumes reflecting turn of the century Great Britain are designed by Hunter Kaczorowski.

Initially, Count Dracula is the mysterious new neighbor from Transylvania. He has moved into a run down manse where he will be quite content to live for the next few centuries.

Though now some 500-years-old he is still svelte, suave and charming. He appears to be quite harmless and asks to use the library. That’s a strategy to be close to Lucy and suck up a bit of blood.

He must be home in his coffin by dawn for a day of beauty rest. Lucy, succumbing to his charms, now finds daytime a bit of a bore compared to nocturnal adventures.

One of Dr. Seward’s resident patients is the lunatic R.M. Renfield (Matt Sullivan). He captures flies to feed and fatten spiders which are his source of sustenance. Under the influence of the Master he also has a taste for blood and has been promised immortality.

Constantly escaping from his room he madly cavorts about the set. Dressed in tattered night cloths Sullivan plays him to the max to the delight of the audience. It’s always manic when he’s off the leash and causing mayhem.

This causes frustration and despair for the attendant Butterworth (Brian Thomas Abraham) who is ready to quit. It seems that he bound his patient in a straight jacket and barred the windows. Still he escaped and has the ability to crawl up and down exterior walls like Spiderman.

It’s all too much for Butterworth who is tired of being criticized for not doing his job. He wants to pack it in but is persuaded not to.

Rounding out the cast is the maid Miss Wells (Jessica Ko). She is tasked with sitting with and guarding Lucy through the night. But Dracula has her in a spell and has his way with Lucy his would-be-queen of the night.

It all comes to a rollicking conclusion that was pure fun, fun, fun.

After a number of thunderous curtain calls Professor Van Helsing asked for quiet with one last word. She sent us home with the notion that what we had experienced was not just an illusion.