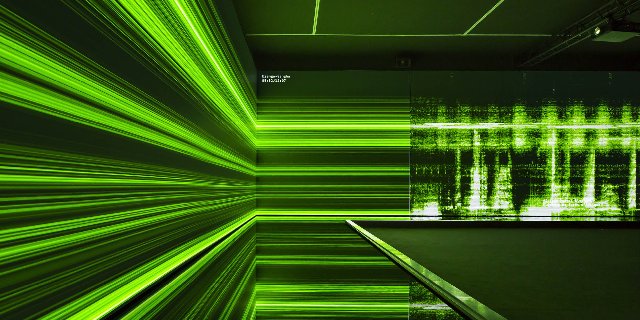 This fall, the Peabody Essex Museum (PEM) and the Fondation Cartier pour l’art contemporain are proud to present the North American premiere of The Great Animal Orchestra, a collaborative work between pioneer bioacoustician Bernie Krause and United Visual Artists. Over the course of nearly 50 years, Bernie Krause collected more than 5,000 hours of recordings of natural environments, including at least 15,000 terrestrial and marine species from around the world. Now, museum visitors can step into an immersive audio-visual experience that celebrates our planet’s rich biodiversity and raises awareness of its alarming decline. Along with the opening, a new documentary about Bernie Krause, directed by the French filmmaker Vincent Tricon and produced by Fondation Cartier, will also be released and shown as part of PEM’s exhibition presentation.

The Great Animal Orchestra is on view at PEM from November 20, 2021 through May 22, 2022 and is Fondation Cartier pour l’art contemporain’s first exhibition partnership in the United States in more than 20 years. The exhibition furthers PEM’s long-running and ongoing commitment to presenting contemporary art that underscores a deep human connection with the natural world both in its Dotty Brown Art & Nature Center and across the Museum’s campus.

Bernie Krause’s research offers a wonderful immersion into the sound universe of animals, otherwise known as biophony. Before developing a passion for recording wild soundscapes, Krause worked as a musician and sound designer in the 1960s and 1970s, collaborating with artists like The Doors and Van Morrison. In 1963 he joined The Weavers, filling the slot established by Pete Seeger. In 1967, with his music partner Paul Beaver, Bernie introduced the Moog synthesizer to pop music and film. Beaver and Krause’s work can be heard on over 250 albums and 135 feature films released between 1967 and 2000, including Francis Ford Coppola’s Apocalypse Now and Donald Cammell and Nicolas Roeg’s Performance.

Krause contemplates the natural world as a poet. He listens to animal vocalizations with a musician’s ear and studies his field recordings from the perspective of a scientist. He has become a master in the art of revealing the beauty, diversity and complexity of the languages of wild animals, increasingly silenced by the din and intrusion of human activity. In the 1970s, Krause recorded soundscapes across North America, Latin America, Kenya, Rwanda and Zimbabwe, as well as a collage of soundscapes from the depths of the world’s oceans. In recent years, he has returned to these exact sites only to find that more than 50% of the recorded biodiversity has been lost. This unique installation thus makes a plea for preserving the wondrous diversity of the animal world. Krause implores us to listen to these voices from the living, non-human world before they are forever silenced.

To produce The Great Animal Orchestra, Krause collaborated with United Visual Artists (UVA), a London-based art practice led by Matt Clark, whose installations and collaborations integrate new technologies and traditional media. UVA developed computer software that creates extraordinarily detailed, immersive, animated spectrograms generated by Krause’s soundscapes to form a visual interpretation of the various global locations and times of day that Krause’s original recordings were made. In this environment, we are guided into the interrelationship of the many species performing in the world’s great animal orchestras.

Krause’s use of sound recordings as a tool to study natural habitats has led to an entirely new field known as soundscape ecology. “Bernie takes a multisensory approach to studying nature. His work reveals that we can more quickly understand the health of a given ecosystem by listening to it than by looking at it,” Trevor Smith, PEM’s Associate Director – Multisensory Experience and Curator of the Present Tense said. “The interrelationship of the sounds that the different species make as they inhabit a given site is a more profound marker of the health of an ecosystem than whether the location appears pristine to the naked eye.” Jane Winchell, PEM’s Director of the Art & Nature Center and Curator of Natural History, added, “The Great Animal Orchestra is a highly original and memorable encounter that stays with you long after you leave. I found myself listening more intently and with greater awareness of how animal sounds serve as messengers of an ecosystem’s vitality.”

Hervé Chandès, General Director of the Fondation Cartier pour l’art contemporain and head exhibition curator, notes that the artwork reflects the Fondation’s commitment to showcasing exhibitions that make people think about art, culture and ecology in new ways. “Bernie Krause’s work teaches us that each animal species possesses its own acoustic animal signature that, like a musical instrument in an orchestra, positions itself with both precision and subtlety within the score of the soundscape of the ecosystem in which it lives. The polyphony of the great animal orchestra is rapidly being silenced and we must band together to protect our natural resources and environments.”