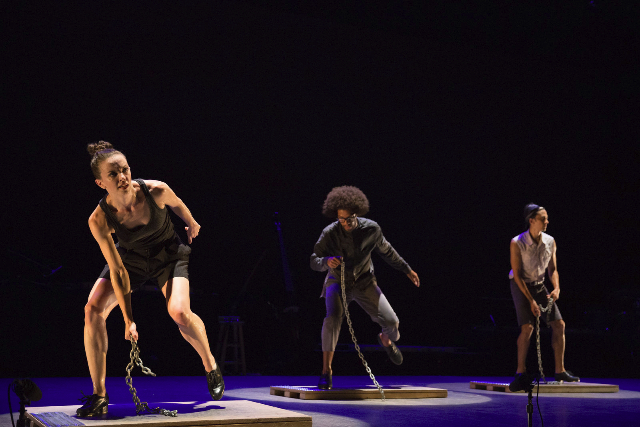 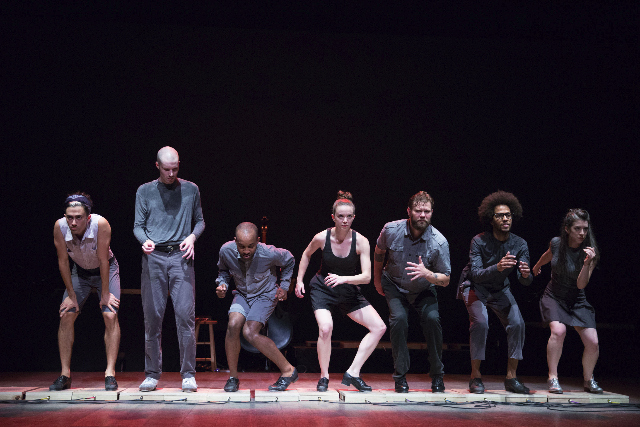 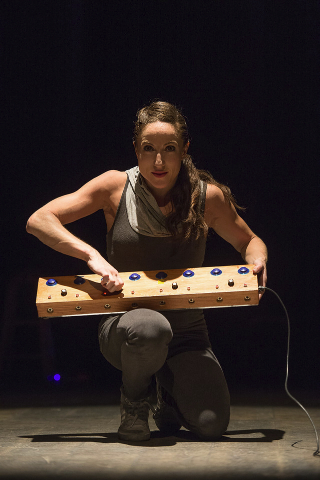 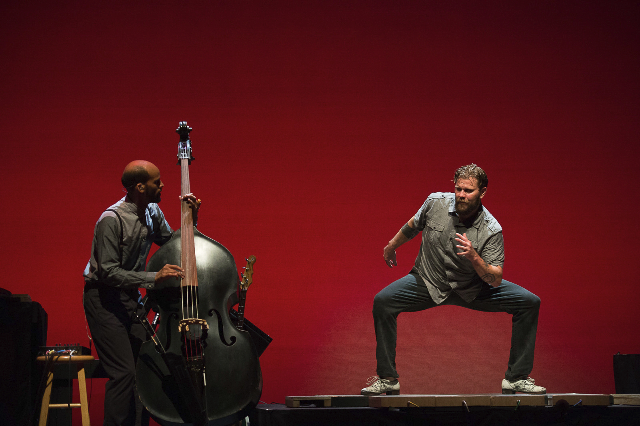 Five years ago Michelle Dorrance first appeared as a part of the Inside Out program for emerging artist at Jacob’s Pillow. In 2013 she was a Jacob’s Pillow Dance Award recipient and is a MacArthur Foundation fellow.

In 2014 she premiered ETM: The Initial and now presents ETM: Double Down.  Last season she presented The Blues Project with musician Toshi Reagon and her Big Lovely band which performed live at Pillow.

The excitement and critical attention that surrounds her is a measure of the remarkable degree to which she has expanded the range and artistic impact of one of America’s indigenous, street based art forms. It has a tradition primarily through Broadway musicals and films that is outside the mainstream of formalist dance.

Through her constant experimentation Dorrance has achieved a dialogue and confluence between vernacular forms, vigorous improvisation, speed and energy with synchronicity arcing into the avant-garde of high art.

In the program we saw this time at Jacob’s Pillow, however, in striving for the new and experimental she has strained the limits of her comfort zone and base. An uneven program often seemed too diverted by inventive, experimental sounds distracting from a showcase for dance.

On a darkened stage  the dancers pushed out a series of low, square platforms developed by the musician and inventor Nicholas Van Young who is also a percussionist and dancer with the company.

The staccato sound of tap dancing is its most unique and compelling feature. It is a dance form that we listen to as well as watch. The movements of fleet feet spell out an exotic language like that of the talking drums of Africa.

In her approach to dance the music, primarily percussion, is created by the company as well as inspired by music. That synergy was richly and excitingly evident in last year’s collaboration with Big Lovely.

Young states that “…I knew contact mics could be doubled as drum triggers and I was playing around with a masterful piece of  software called Alberton: a live performance software, digital audio workstation. I got the idea to create small trigger boards to dance on- essentially wooden drum pads… Soon I was able to play notes, arpeggios, chords, sound bites and quotes, and began composing scores in real time with improvised tap dance…”

The setup of these platforms, woven into the choreography, was prolonged and suspenseful. When enacted the dancers were able to tap out complex music conflating movement and sound. This is a quantum leap from just amplifying the stage to intensify the sound of tap.

During an initial sequence, a kind of introduction to the audience, Young briefly performed on a standard jazz drum kit. As the piece evolved at intervals other dancers also played a range of drums and cymbals.

The musical elements became so prominent that we wondered if we were hearing a concert of experimental music or a dance performance.

Another musical element was provided by the bass player Gregory Richardson. He laid down a lick which was then looped and he overlaid that with another element. Eventually he was playing lead, switching to guitar, to his own accompaniment. This kind of overdubbing has a history in pop music reaching back to Phil Spector and Brian Wilson.

There was another element introduced by the break dancing and acrobatics of Ephrat “Bounce” Asherie. Wearing sneakers instead of tap shoes she provided a contrarian, mischievous and arguably distracting counterpoint to the tap virtuosity. It was an interesting idea that didn’t always work as Asherie was too often showboating and out of sync with the main flow of the company.

After intermission,  the second part the single, evening long piece started with the vocalist Aaron Marcellus. He began softly with vocalese or invented sounds of a jazz scat singer. As was the case with the bass solo again his singing was looped with layers upon layers. The sustained solo again seemed out of place in a dance program.

Eventually he moved to the back of the stage while dancer performed. He sang lyrics which were impossible to hear or understand. That seemed to create a narrative as two male dancers engaged in a bit of push and shove that signified a lover’s quarrel.

This brief insertion of narrative into an evening of extreme aural abstraction felt more disruptive than inventive.

There were flashes of the virtuoso tap that Dorrance and the company are known for. That finally broke out in a super-charged and spectacular finale.

Unfortunately, it was a peak experience that we had been waiting for all evening.