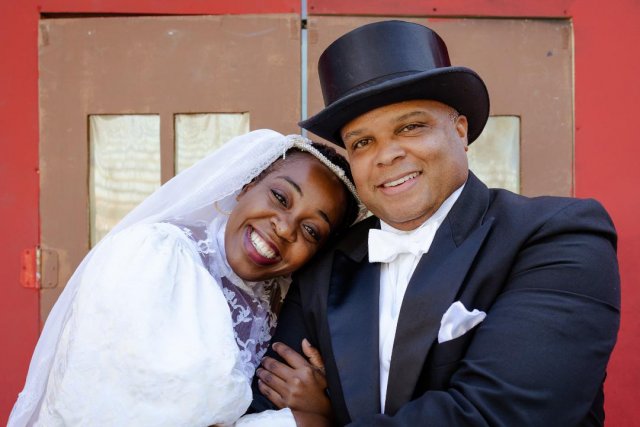 Leslie Ivy as Agnes, Gary Stanford, Jr. as Michael. (no attribution for photo).

Many entertainments succeed by drawing on the audience’s inside knowledge of the subject matter.  The musical “I Do!  I Do!” covers familiar ground that is nearly universal in most places and times.  The vignettes from 60 years of marriage include that unforgettable first night; gender roles; pregnancy and the challenges in rearing children; how people change over time, and often in opposite directions; the special highs of being a couple; infidelity, disinterest, and reconciliation; and ultimately, shared dotage.  Whew!  Woodminster Summer Musicals has mounted a pleasing production of this bittersweet confection.

These days of Covid have prompted special cautions for the return of theater.  In this case, the company’s venue offers special comfort for the audience.  The spacious Woodminster Amphitheater in the Oakland Hills’ Joachin Miller Park provides more than ample room for social distancing in an outdoor setting.  Plus, attendees can picnic in the park or have food and drink al fresco from the limited concessions stand or brought from home.

The musical itself also fits the safety needs of the company almost as well as possible.  Played on a single set, it is a two-hander, thus limiting the number of performer contacts on stage.  Musical accompaniment is two pianos at opposite ends of the huge stage, with a conductor in the pit.  But amongst these minimalistic elements, Kevin Stanford’s numerous and oft changing props and Lisa Danz’s costume coordination give visual variety and relevance to scenes representing various time periods.

The backstory of the musical starts in World War II Netherlands.  Author of the source material, Jan de Hartog, wrote the play “The Fourposter” while hiding in his homeland from the Nazis.  The detailed mileposts of a marriage’s long journey are clearly not based on personal experience, because he was still a bachelor at the time of its writing.  But the story was picked up by composer Harvey Schmidt and lyricist Tom Jones, the team who in 1960 had written what would become the longest running stage musical ever, “The Fantasticks.”  In 1966, their “I Do! I Do!” would commence an award-winning, 18-month run on Broadway.

Veterans of Bay Area stages Gary Stanford, Jr. as Michael and Leslie Ivy as Agnes make up the cast for this production.  They are well matched as a pair and manage the dramatic and comedic aspects with skill.

The songs are largely upbeat and support the plotline.  Although the show isn’t studded with memorable tunes, the jaunty opening title song lilts and sets up the narrative.  Perhaps the actors weren’t warmed up or had first night jitters, but that number and those immediately following are not as strong as they should be.  Later, in pieces that call for powerful vocals, Ms. Ivy settles in and shows her stuff.  Mr. Stanford reveals a mid-range sweet spot, but his solos never quite hit the mark.  However, in harmonies, his voice mixes extremely well with Ivy’s, and they excel when singing together.  In addition, his dancing is definitely an asset.  Like a power forward with the moves of point guard, he is remarkably light on his feet – nimble, quick, and graceful.

The show stopper is the beautiful, yet schmaltzy, “My Cup Runneth Over,” which became a Top 10 pop record single in 1967.  Sung as a duet in the show, the pair capture the essence of the song nicely.  But the most fun number is another duet, “Nobody’s Perfect.”  A lengthy piece that centers on each spouse enumerating the faults of the other, it is largely delivered in patter-talk.  It is hilarious and the couple ace this one.

Following on is another fractious, and this time, gasp-inducing song.  Michael has become a successful writer, whose novels are uninspiring to Agnes, a stay-at-home wife.  With an inflated sense of ego, he fancies himself a chick magnet, while not appreciating that his admirers at literary talks don’t see the side of him that only a wife suffers.  His self-indulgent anthem “A Well Known Fact” argues that a man only gets better with age, while a woman goes to pot, not winning him the gold medal in the diplomatic race.

Although the conflict songs are played for laughs, the clashes around them are serious.  The actors perform their best in these animated, hostile moments.  In all, the musical and the actors find a good balance between lightheartedness and dysfunction.  The years pass by quickly.

“I Do! I Do!,”  composed by Harvey Schmidt with lyrics by Tom Jones, is produced by Woodminster Summer Musicals and plays on its stage at 3540 Sanborn Drive, Oakland, CA through August 22, 2021.