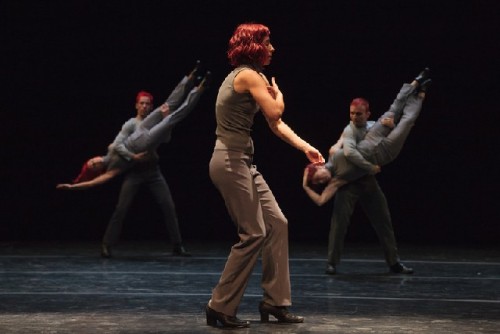 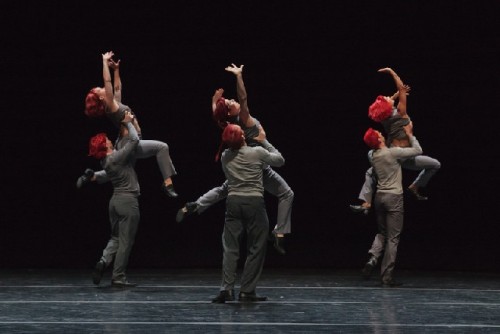 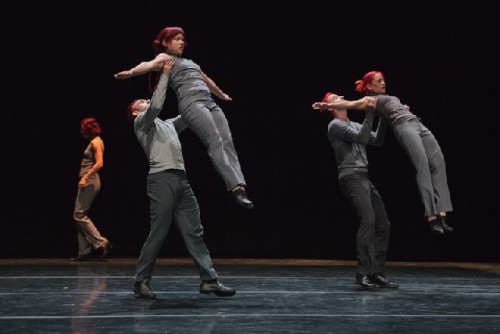 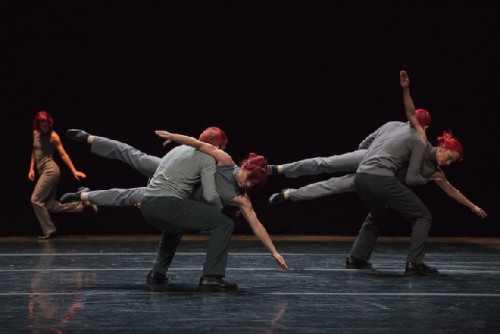 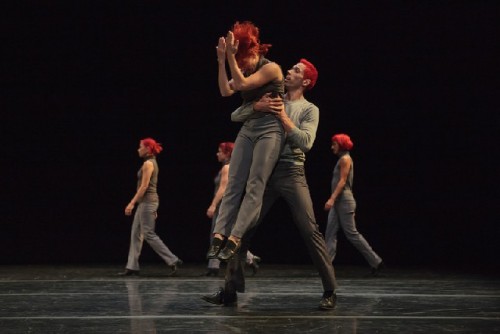 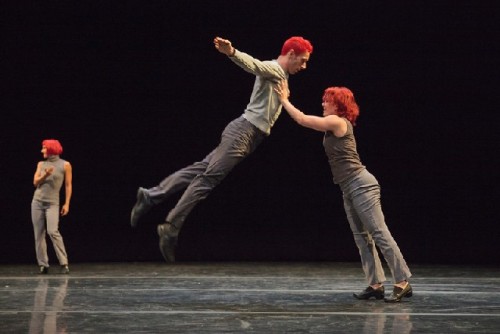 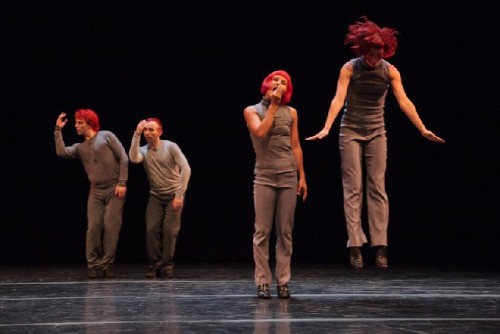 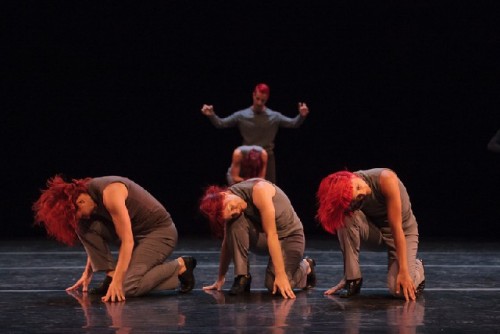 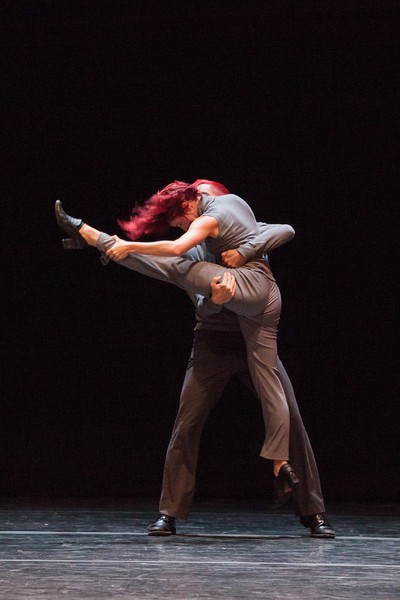 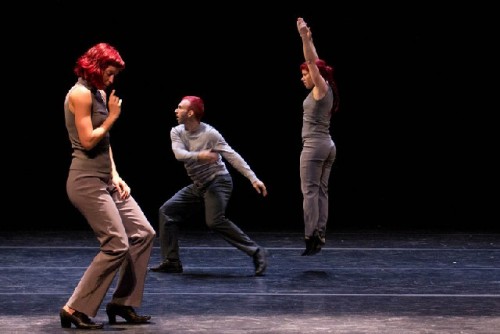 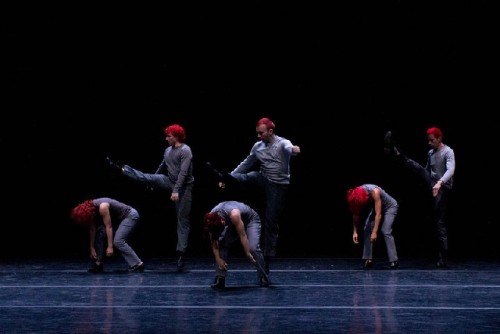 The Steve Reich composition Drumming (1971) is considered a monument in the canon of contemporary music. It is a signifier of the movement of Minimalism that was launched by La Mont Young ((born October 14, 1935) and includes a triumvirate of Reich (born October 3, 1936) and Philip Glass (born January 31, 1937).

The style, in this case pure percussion, entails seemingly endless repetition of phrases and rhythms with very subtle shifts and nuances. On first exposure there is a sameness that is  soporific and trance inducing.

For the initiated it is an invitation to reverie as the senses pulsate with the thread that flows and wafts us along with an assault of associations. Depending on the receptivity of the individual the experience is either exotic and meditative or enervating.

Once the hour long performance of Drumming commences, in this case with twelve musicians and nine dancers it is a matter of Huis clos. As in Sartre’s 1944 existential play there is No Exit from a relentless and hypnotic aural and visual experience.

It is important to note that there is no escape or moment of pause or release from a phenomenon that is a perhaps tyrannical and relentless sensual assault. There is the ever shifting pulse and flow of the percussion echoed by the  engaged dance. While constantly varied  it never lets up for a moment of sorbet to cleanse the palate between sections that are performed edge to edge with no breaks.

Decades ago, my first exposure to the minimalist style came through a live performance of Glass and his ensemble at Harvard’s Sanders Theatre. Even as a jazz critic used to the avant-garde of Ornette Coleman, John Coltrane, Albert Ayler, Anthony Braxton, Cecil Taylor and others the music initially confounded me. It was most accessible to approach it as an extension of jazz.

During lunch meetings with Glass and Reich, arranged by a promoter of their music, I became disabused of that approach and came to find a footing with which to embrace the music. Once you surrender and stop imposing your notions of what it should be, and how to respond, I came to truly love the experience.

The music often takes one to other places without the need for chemical assistance or involved initiation and training. It has a short hand way of  catapulting you to that other time and place so far far away or layered deep inside us.

A recording of the Reich piece Drumming was a part of my studio music collection. An art studio can be a solitary place. Often the selection of music has a bearing on releasing the flow of the creative act. This can entail hours of the most intensive concentration. In this context Drumming was always a welcome studio companion.

So the music and experience were readily familiar and I much anticipated this evening at Pillow. It was the first time that I heard the piece live. In comments before the performance Ella Baff, the artistic director of Pillow, informed us that the 1999 dance set to Reich’s music had become a classic of modern dance. By demand it has been reintroduced into the repertoire of the company which had not performed at Pillow in a decade.

The curtain parted revealing an open stage with uniform medium lighting designed by Axel Morgenthaler. There appeared to be no lighting cues throughout the dance. This was an aspect of a presentation of the whole, the ensemble of musicians and dancers, with little or no emphasis on individuals. There were segments that involved single dancers, partners (including same sex), and groups of four (male and female), but no sense of any hierarchy of stars and spectacular, audience thrilling individual efforts.

The musicians occupied a compact side of the stage navigating their way around groupings of eight bongo drums, three marimbas, and three glockenspiels. There were two voices and whistler/ piccolo. There were four parts or movements in the seamless composition.

Before the percussion began a single dancer walked/ paced about the stage gradually joined by three pairs (male/ female). Then four.

Normally bongos are hand drums but here they were played with sticks. This results in a sharp, high pitched sound. As the beat commenced one marveled at its intricacy and precision particularly when it entailed shifts that require an attentive ear to calibrate. From the standpoint of musicianship this performance was truly flawless as conducted by Walter Boudreau.

Remarkably, with riveting intensity, in an hour’s duration the musicians never missed a single beat. For a very demanding composition that’s an amazing accomplishment.

The same may be said for the dancers who displayed control and precision. Maintaining a flow of perpetual motion surely must be taxing. The chorography of Laurin, however, established a limited vocabulary of movements. This entailed lifts, kicks, walking/ pacing, and segments on the floor.

Given the stark nature and confines of the music there is no room for narrative although one might just because of a horror vacui find some humanistic aspect of relationships. Mostly, however, the dance was as deadpan and locked in as the percussion.

The bongo movement shifted to marimbas. It has the possibility of notes because of the range of its wooden keys but here the emphasis is on an organic percussive tone. It is perhaps why Reich did not opt for the electronic vibraphone and its latent potential for melody. Similarly, the change to glockenspiels truncated their potential for melody preferring to evoke a different pitch and texture to the sustained time signatures and their internal shifts.

Truth be told it was glut of textures, rhythms, and movements to absorb. The sameness, unless one paid strict attention, devolved into lapses drifting away from what was on stage. It induced an ebb and flow of consciousness. You would bolt out of a dream state and, with a shake of the head, attempt to refocus.

There were some points to be distracted or fix on. Like the shock of bright red hair of the dancers and their initial appearance in generic street clothes. Then, toward the midpoint to end, the women appeared in what a colleague described as short shorts but to me were red satin panties.

Overall, I have mixed responses to seeing that iconic music set to dance. Previously I was free to form my own mindscapes and imagery when listing to Drumming. In this instance it seemed too literal to see someone else’s interpretation of what it looks like. For me the resultant dance was efficient and disciplined but ultimately uninspiring. Nothing about the dance was particularly definitive.