Guilt Free Barbecue in the Berkshires 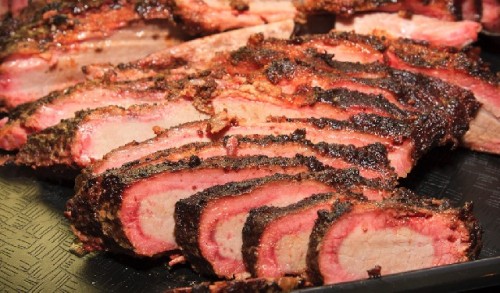 Go ahead, call me a conspiracy theorist, but don’t you occasionally have this sneaking suspicion that our lives are being subtly manipulated by evil, highly sophisticated marketing genies, converting us from presumably sentient beings into veritable retail slaves? Does that sound extreme?  More than a modest dose of healthy cynicism? Here’s a recent case in point.  You decide.

A slew of family members recently descended upon our Berkshire home for a weekend visit and I wanted to cook something out on the deck that would satiate a slew with varying tastes.  A smoked brisket sounded like just the ticket.  As one of the “in” foods of the decade, what better entrée to trot out to the fam?  Southern style smoke houses have been multiplying faster than boll weevils. Swarms of suburbanites have been spotted migrating to big box stores to purchase ever more impressively-equipped contraptions to keep up with, or if at all possible to out-smoke, the Joneses. (Remember back in the ‘70s when everyone had to have a hibachi?  Where have they all gone, I ask you?)

When I looked up smoked brisket recipes online is when I felt the first shiver of a qualm of an inkling that I was being subliminably manipulated.  Half the recipes trumpeted something to the effect that under no conditions can one properly smoke a brisket without a super-duper, hoopdiedoo smoker outfit.   Now, I personally happen to be the proud owner of a certified, vintage El Cheapo gas grill that after all these years has yet to explode on me, and I wasn’t prepared to run out and spend hundreds of dollars to cook a slab of meat, so I didn’t bother to go further with those particular recipes.  The problem was, even those that didn’t mandate a state-of-the-art gizmo listed more ingredients than the number of times House Republicans have tried to repeal Obamacare, and recommended advanced degrees in culinary history and meteorology, not to mention alchemy.  For example, they demanded I come to terms with a quasi-mystical concoction referred to as The Rub, which required minute fractions of teaspoons of various rare and exotic products that can be obtained only in Timbuktu on market day, and we all know how expensive it is to get a good flight/hotel package there these days.  Then, assuming The Rub was successfully conjured, there followed The Sauce, a potion involving yet more esoteric components.  Where, I ask you, does one find 3-year aged persimmon vinegar?  (A slight exaggeration for dramatic purposes.)

In the end I threw caution and my computer to the wind, and decided to wing it!  I determined to smoke my brisket without any recipe whatsoever on my El Cheapo…and I lived to tell the tale!  In fact, some said it was the best brisket they had ever eaten.   What’s more, it’s a foolproof recipe that can be prepared successfully even by the proverbial dolt who can’t boil water, because for the most part it doesn’t matter what you do! Take that, marketing-retail complex!

There are only two things you need to make a great smoked brisket: 1) a brisket, and 2) smoke.  Everything else is optional and variable, including, for that matter, the smoke.   For example, to simulate The Rub I rummaged around my kitchen cabinet and discovered a small container of something called Montreal Steak Seasoning tucked behind the Cheerios.  How and when it got into my cupboard, and what exactly Montreal Steak Seasoning is, I didn’t know; regardless, I suspected it might be a good find.  Montreal is, after all, in southern Canada, I reasoned. I also found Chili Powder and Ground Mustard, both of which had colors that pleased me.  I stirred up arbitrary amounts of the three ingredients in a bowl, poured them onto the meat and rubbed it in with fervor.  My guess is, other than salt and pepper, you don’t need any seasonings whatsoever to make a blue ribbon brisket, but I have to say rubbing it in felt great, so I recommend it.

Some of the online recipes stated in no uncertain terms it’s essential to let the massaged brisket sit in the fridge overnight wrapped in foil in order to absorb the flavors.  Keep in mind, if you decide you seriously want to take this step, you may have to first purchase a larger refrigerator.   On the other hand, it wouldn’t do to let the meat sit out overnight as it might attract some family members you hadn’t invited.  After weighing the pluses and minuses, I disregarded this instruction because it doesn’t make a difference. So either put it in the fridge or on the barbecue, whichever moves you.

Next, making smoke.  Go to your supermarket and get whatever barbecue wood chips or pellets they have on the shelf.  If there’s more than one variety, get the cheapest.  Some recipes say to use mesquite, others hickory.  Fancy-asses like apple or myrtle wood, but it makes no difference what kind you get.  It’s all fine.  Just follow the instructions on the bag…or not.  Some say to soak the chips for 1½ millennia, but you probably don’t need to soak them at all.  If the store is totally out of wood chips, don’t worry, because you don’t really need them, period; but if it’s fun for you to make smoke and it makes you feel like you’re doing something “authentic,” I say go for it.

Here’s the one and only important thing you have to do.  You have to cook the brisket really, really slowly; otherwise it will be as tough as three-week-old road-kill goat.  So what I did on my 2-burner El Cheapo is this: I turned on the left burner to the lowest setting and put the smoking packet on the grill above the flame.   Then I set the meat on the unlit right grill, closed the cover, waited about eight hours, and voila!  (Eight hours is merely an estimate.  If by accident you step on your watch, or the brisket changes time zones, don’t worry; an extra hour or two will only make it more tender.)  Chances are you can also bake a brisket in the kitchen oven on the lowest setting and it will do just fine, but if it makes you feel manly doing it on a grill, then do it on the grill.  Also, if you enjoy poking and prodding every so often like I do, it’s easier to do on the grill than in the kitchen…unless it’s raining.

Oh, I almost forgot to mention about The Sauce, probably because like everything else, you really don’t need it.  But if you want barbecue sauce, anything you find on the supermarket shelf will taste just about as good as something that takes three hours of messy anxiety to prepare, and if it makes your life feel more meaningful to brush it on the meat about an hour before it’s done, who’s to stop you? Or you can just pour it on when it’s all done.  Just as good.

I leave you with this final thought. I believe there are powerful invisible forces at work here: forces that would try to convince you that for a good brisket, 1) you need to go to a “real” Texas or Kansas City or North Carolina barbecue restaurant where you have to stand in a long line to pay top dollar for two slices of meat (and up to two sides, excluding fried okra which is extra) “traditionally” served on a paper plate with a roll of paper towels for napkins and where you sit at a Formica table on which your forearm sticks to the surface; or 2) you have to make a financial choice between sending your kids to college or buying a smoker that you’ll end up using once every ten years.  If you resist buying the “right” ingredients or the “right” merchandise, these unseen forces make you feel queasily less than adequate, less American even. To that I say: Rise up and buck the system!  My recipe-free brisket could well be the first step in freeing yourself and your hard-earned cash from the insidious marketeers’ vicious cycle.  Ignore this advice at your peril though, because once you succumb to the smoker, it’s only a matter of time before they’ll nail you with the outdoor wood-fired pizza oven.

That’s about all she wrote, but if you end up forgetting any of the details I’ve painstakingly provided, don’t worry.   It doesn’t matter.

Gerald Elias is a former violinist with the Boston Symphony and associate concertmaster of the Utah Symphony.  His four award-winning Daniel Jacobus mystery novels take place in the dark corners of the classical music world, and are frequently set at Tanglewood and the Berkshires.
http://www.amazon.com/Gerald-Elias/e/B00252OY3K/ref=sr_tc_2_0?qid=1376168927&sr=1-2-ent