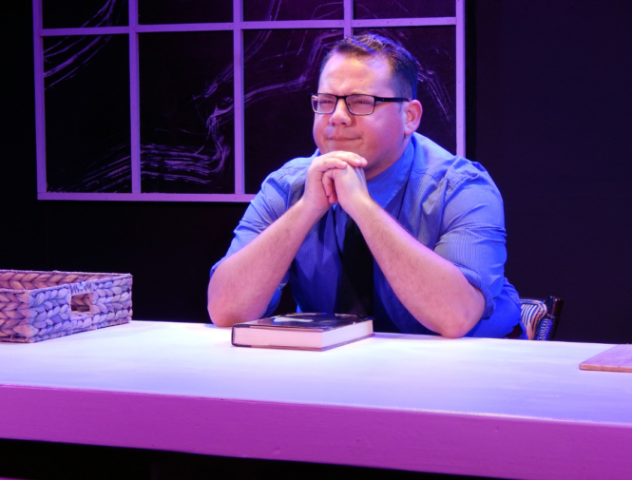 Photo by Carol Kassie The titular character contemplates something in the world premiere production of "Educating Asher." 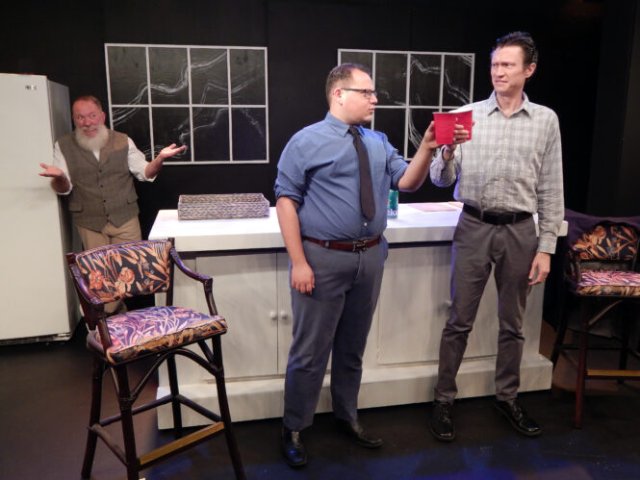 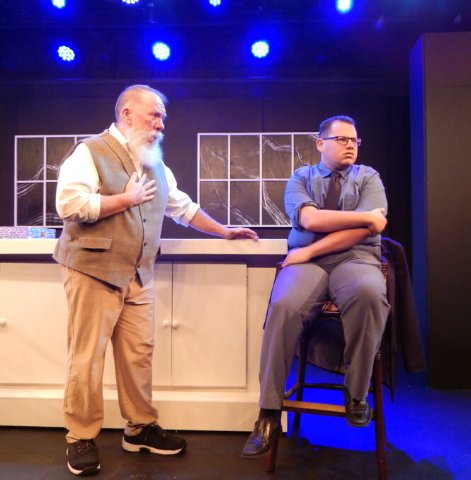 Photo by Carol Kassie The ghost of Elliot Weiss (Murphy Hayes) tries to express himself but Asher (Eytan Deray) is having none of it.

If you were blessed with an Elliott Weiss in your life, Educating Asher, a heartfelt and humorous new play, will touch you in a personal way.

But even if you never had such a special person in your life, the aforementioned new piece is universal enough to speak to everybody. After all, we will all lose somebody dear to us.

Educating Asher, which is experiencing a mostly strong world premiere professional production by Empire Stage in Ft. Lauderdale, is partly about how we react to death. In addition, the play reminds us that everybody mourns differently — and there is no correct way to do so.

While Educating Asher is about death, versatile South Florida theater artist Eytan Deray brings Weiss to vivid life on the page and stage. Deray wrote and stars in the autobiographical Educating Asher. You can see Deray’s play thru Sunday night in Empire Stage’s extremely intimate space. In fact, so far, the production has proven so popular that Empire Stage extended the run by one performance.

Certainly, Deray deals with dark, weighty subject matter in Educating Asher. For instance, it is about coming to terms not just with death, but with one’s sexuality, identity, and a painful past.

To Deray’s credit, the piece is never depressing. That is because the playwright includes enough humor and humanity to make his taut yet layered play not only bearable but compelling live theater. We care about the characters because they are likable, multi-dimensional people. Perhaps Weiss reminds us of a kindly grandfather or uncle.

Speaking of Weiss, he was Asher’s middle school television production teacher. When Educating Asher begins, an adult Asher and his boyfriend, Mark, are in the home where Weiss lived with his husband, Nick. Inside, a reception is taking place after Weiss’s funeral. Soon, we learn that Asher’s adult life has not been that much easier than his childhood. Presently, Asher and Mark barely speak to each other. Actually, Asher has not even unpacked his suitcase after living with Mark for two months. When we learn why, it is easy to feel for Asher.

While the post-funeral reception takes place in the living area of the home, Asher and Mark remain in the kitchen, away from the action. Apparently, Asher does not do well at such events. To make matters worse, soon after the play begins, Elliott’s ghost appears to Asher. Of course, he is the only one who can see the spirit.

“In the short time I’ve been gone, I realized neither of us really got the closure we wanted,” the deceased man tells Asher. “So, I thought we could be together in this, come to some sort of absolution about this whole thing before I finally check out. Maybe we can’t find the answers, but we could at least be at peace. I’m not gonna tell you to ‘move on’ or ‘get over it.’ Because nobody can or will. All we can do is remember. Do you think we could do that? Please?”

And so, Elliott’s ghost whisks Asher back to his middle school days. (“Mr. Weiss, this all feels a little Christmas Carol-y,” Asher complains.)

While looking back at his middle school days, Asher comes to fully appreciate how much Elliott meant to him as a teacher, mentor, and friend. Also, the flashbacks remind Asher of a day in middle school that he forgot, probably because it was too painful to remember. But as dark as that day turned out to be, Elliott was there for him.

Of course, the flashbacks could not answer one of the questions Asher posed to Elliott – why did God take him at only 67? (he died after living with dementia for five years).

In the end, Deray leaves us with a vivid portrait of a man who held an under-appreciated job – he was a teacher. In fact, without preaching too much, Educating Asher shines a necessary light on the profession.

“Do you know how hard it is to be a teacher?” Elliott asks. “There’s an idea-no, a fact-looming over you that you may not be able to teach every kid who walks into your classroom. Some kids stay glued to their phones, checking social media, or plugging their headphones in to listen to music. Or they clown around and tune out thinking ‘Nah, Television Production is an easy A. I’ll fly right through this course.’ I remained hopeful for one thing: that if I can’t get through to every child, let me at least get through to one. One kid. That kid was you.”

Performance wise, the actors are mostly touching and convincing. The one knock on the performances is that at times, responses come too quickly. As a result, they sound rehearsed instead of spontaneous.

Murphy Hayes imbues Elliott with a pleasant and happy disposition, even in death. With concerned, shining eyes, and looking like Santa Claus, Hayes immediately makes Elliott likable. The actor never tries to “act like a ghost,” although he lends Elliott a bit of a playful, teasing manner in the beginning. It sounds like good-natured fun and helps add humor to the proceedings.

Actually, if Asher were a real person, it would be easy to want to joke around with him a bit to break the ice. Asher seems like an uptight, nervous individual with low self-esteem.

“You’re not an asshole. Never were an asshole,” Mark tells him. “A classic ball of Jewish neurosis? Sure. But everyone’s a little neurotic, so who cares.”

Deray, his face red at times, tenses up convincingly as Asher, holding his arms close to his chest or touching his chin. In addition, the actor, with tension in his face, winces or shuts his eyes tightly when Asher hears something that bothers him.

The performer saves his strongest moments for Asher’s loud expressions of pain. They sound intense, but not forced. Toward the end of the play, Asher, speaking in a broken voice and sobbing, falls to the ground. A concerned Mark holds the balling character in one of director Seth Trucks’s striking stage pictures.

Impressively, Deray conveys Asher’s vulnerability without making the character pity himself. During flashbacks, Deray merely speaks in a higher-pitched voice to portray Asher as a youngster.

Meanwhile, through Michael Harper’s performance as Mark, we keenly sense the character’s frustrations with Asher. But, to his credit, Harper never makes us doubt Mark’s devotion to his boyfriend.

As Elliott’s widower, Nick, Noah Levine believably conveys a calm resignation and serene demeanor. This acting choice makes sense; Nick notes that he has cried so much since his husband’s death, he is out of tears.

As the director, Trucks finds the right balance between humor and pathos. Also, the pace is just right (the production lasts about 80 minutes without an intermission).

In addition, behind the scenes, set designers Jordon Armstrong and Johnbarry Green have created a realistic-looking kitchen. The predominant colors are black and white. Both make sense, considering that the play revolves around a death.

Lighting designer Preston Bircher deftly contrasts realistic scenes from non-realistic moments. The costumes are also appropriate considering the occasion (the production does not list a costume designer in the program).

In the final analysis, Educating Asher is a taut, touching, humorous, and honest play. The piece, which does not contain one wasted moment, deserves a long life in the theater.

Empire Stage, an artist-driven collective that produces new and existing works for Ft. Lauderdale’s diverse audiences, has gotten Educating Asher off to a promising start.

Educating Asher runs through August 14 at Empire Stage, 1140 N. Flagler Drive in Ft. Lauderdale. Remaining performances are 8 p.m. Friday and Saturday, as well as 5 p.m. and 8 p.m. Sunday. Tickets are $25. For more information, go to empirestage.com.