This by Melissa James Gibson 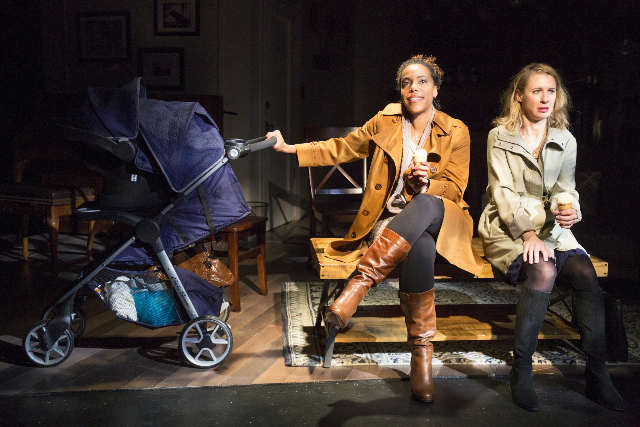 There is a dark secret between best friends Marrrell and Jane. Photos by Scott Barrow. 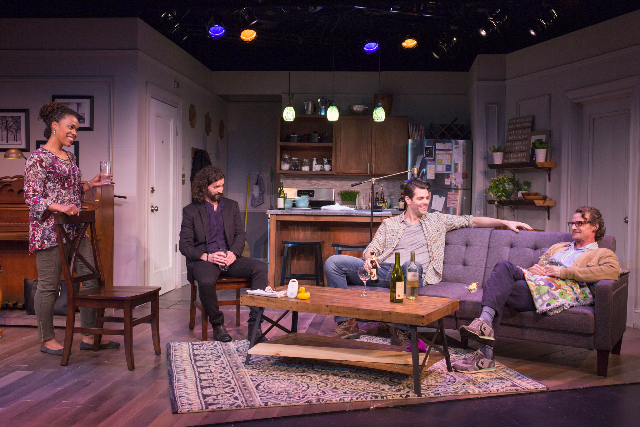 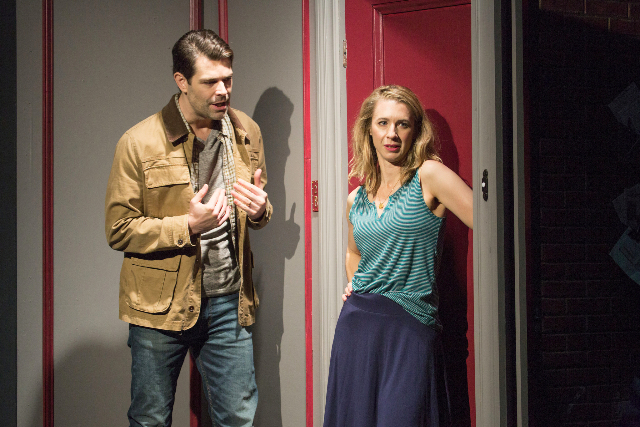 Up against the wall sex in the hall between Tom and Jane. 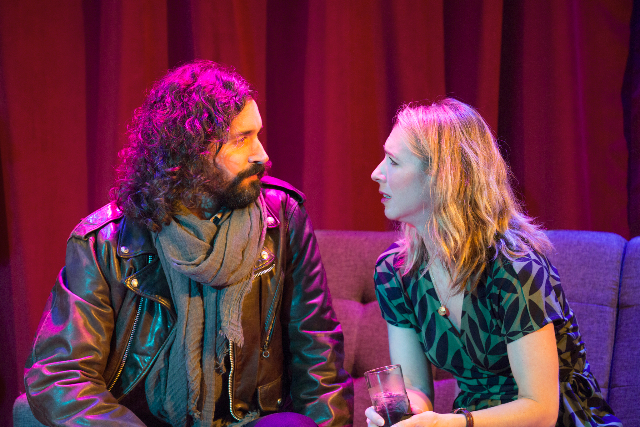 There is no chemistry between Jean-Pierre and Jane.

By this time in the season it’s been up to here with top heavy message plays and plots about adolescents and millennials.

There are more reasons to attend theatre than being sensitized to social and political issues. We get enough of that through mainstream and social media.

With This, by Melissa James Gibson, it was a relief that Barrington Stage has taken a breather from changing the world. It is stepping up by a generation in presenting the post college traumas of former classmates and a wild card new acquaintance.

It is refreshing to have a 95-minute, one act play in which the characters do not obsess over insecurities and sexual identity while constantly texting on their cell phones. In Barrington’s most recent such play the texting was projected as part of the set design. In this play the characters actually talk to each other in mostly plain English.

But the context of friends gathering in the cramped apartment of Marrell, an African American jazz singer (Erica Dohler), and Tom, more or a less a handyman on their former campus who spent a lot of time in the library (Eddie Boroevich), too readily evokes long running TV sit-com shows.

Not surprisingly the playwright has written for the small screen most notably the hit espionage themed show The Americans.

Apparently, Jane (Julia Coffey) also had a mixed marriage but her husband died young leaving her with a seven-year-old daughter who we never see. She seemingly can’t move on and it is coming onto the first anniversary of his death. The group tends to make a martyr of him but there is a blow back line that he wasn’t ‘Desmond Tutu.’ He was just a great guy they all loved who died young. She keeps his ashes on top of the refrigerator where the motor vibrations in an odd way comfort his spirit.

Jane states that she had a good marriage but not a perfect one. She may be ready for sex but not for an emotional commitment

Their friend Alan, the always magnificent Mark H. Dold, is bitchy, funny and gay. He earns a living by demonstrating remarkable feats of eidetic memory as a form of entertainment. With delicious comic impact he recalls every detail of conversations including bickering between Tom and Marrell. They have become sexually and emotionally estranged following the birth of their infant son. Their lives revolve around the baby’s fifteen minute sleep cycles.

A point of the playwright is that this generation, while coping with issues of marriage, loss, infidelity, career and security, are comfortable with agendas of race and sexual orientation. These aspects do surface but are deftly deflected rather than dwelled upon.

During the protest years of the 1960s these were huge, complex agendas for my generation. Since then, the rough edges are ever smoother as race and gender have been absorbed into the fabric of American life. The extent of that progress is arguable but these urban, college-educated characters reflect a new normal.

One manner of marking this is the use of jazz as background music and the performance by Marrell in a nightclub. She has a wonderful vocal style accompanying herself on a studio, upright piano. Her character must have been an interesting challenge for casting as the role demands acting and musical skill. Her performance delivers with subtlety and grace on every level.

Which is not true of her husband Tom. He is tall, awkward, emotionally encumbered and riddled with conflicts which are less than deftly conveyed. It was difficult to sort out whether that was the character as written or the stutter step of his performance.

The seduction scene of Tom knocking on the door of Jane’s apartment could not have been clumsier. When lust prevails over taboo and inhibition, an unconscionable betrayal to Marrell, it is consummated in the hall up against the wall. Neither they nor the audience appear to enjoy their two backed beast. There is nothing loving or emotionally fulfilling in their one night stand.

The complicated action is accomplished on a cluttered set, designed by Brian Prather, in the confines of the small stage. It provides the studio apartment of Marrell and Tom, the messy one of Jane, a door to her apartment and hall. Then, with a drawn curtain and piano, a nightclub is created. In the final scene a door is wheeled into Jane’s apartment to create the illusion of a bedroom. That’s a lot demanded of a designer working in a small space with a limited budget.

The costumes by Tricia Barsamian appear to be off the rack or from Goodwill but suits the characters. In particular Alan has been given a floppy cardigan that he occasionally pulls together as body armor. The dark, mysterious stranger is dressed in black.

The wild card in this mix of Friends (does that sound familiar) is the French doctor without borders Jean-Pierre (Paris Remillard). The doctor has taken leave from Africa to attend a conference in New York. He is diffident, arrogant, aloof, bearded and sexy. In other words, French.

If you have ever spent time in Paris you know that I mean. He conveys off putting Gallic disdain for those not versed in the lingua Franca of his language and culture. He steps to the apron of the stage to take a cell call. One caught some but not all of the drift of the animated conversation. The characters appeared mesmerized by the lilting, poetic flow of a language they do not understand.

Initially, he was invited as a potential date for Jane but that never meshes. He hangs around through an edgy combination of curiosity and ennui. Soon we learn that everyone but Tom, who has no clue what he wants, lusts after Jean-Pierre.

Alan wants to call him Pierre, JP or PJ. Annoyed by Alan the stranger states that his name is Jean-Pierre. Americans feel more comfortable with nicknames. Our electrician, for example, dubbed me “Chuck” and I called him Pete. Lately, however, he insists on being addressed as Peter. A rose, is a rose, is a rose. Let’s have a chorus of ‘The Name Game” by Shirley Ellis.

Foreplay comes from Alan who is eager to volunteer in Africa. With a flick of the tongue Jean-Pierre dismisses him. Eventually when asked who he would prefer to sleep with, Jane or Marrell (after the infidelity is revealed), he answers “both” and that he is “bisexual.” That Tom and Jane have committed adultery comes as no surprise to him. He comments that it is just bodies doing what bodies do.

Having created an emotional Mulligan stew how does Gibson exit this brewing concoction? Having exposed lies, deceit, lust and betrayal will the four remain friends?

As a plot device Gibson introduced a parlor game. When someone leaves the room the others are supposed to make up a story. In fact they do not. The player asks questions to reveal the story. There is an agreed upon formula of yes, no, maybe based on whether the question ends in a vowel, consonant or how it is framed.

That gets a refrain later when Marrell asks Jane probing questions. In a real life situation the game is not amusing. Much of This revolves around social gamesmanship and role playing. It serves as a signifier for young adults in transition.

Booze helps but they have run out. There are no more intoxicants to anaesthetize reality.

It seems that Jean-Pierre is fed up with this nonsense. Finding the folder with a text he is delivering he looks around at them. Making a circling gesture referring to them he states that this is “dinky.” It is a word that Alan had used previously. Then slapping the folder he states that this is important and leaves in a huff. It’s back to Africa with sobering issues of life and death.

That could and should have ended the play. But instead we have Jane at home in a soliloquy at the door of her daughter’s bedroom. Holding a tray of food she begs to be forgiven for not showing up on time to pick her up.

Holding the tray awkwardly one worried that she would spill the glass of milk. Likely it was glued to the tray. That serves as a metaphor for the play itself.

By the end of the evening there was reasonable doubt whether the characters really matter. Did their coming of age conflicts absorb or enlighten us? Or, like TV, was it just an entertainment? Avoiding the mess of spilled milk, like that precarious prop, were the characters glued to a tray? Perhaps that’s why this play ended without tears. We just went home.