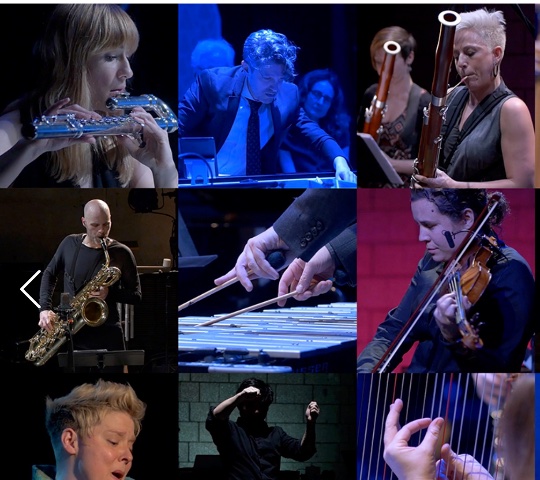 You can count on every International Contemporary Ensemble concert to deliver surprise, shock and awe.  Performers are always in tip-top shape. At a Mostly Mozart concert, you might hear an instrument you’ve never heard before, like the Cimbalon or the Kamanchah. ICE is superb and daring.

The position from which you’re hearing a work varies from piece to piece. The evening opened from the inside of a new organ being installed.  At first breath is used in brass instruments.  Breath has been used for other purposes by composers, beyond the breath that is the basis of song.  Here it is legitimized by the organ pipe without connection to organ.  Slowly recognizable notes begin to emerge.  It is as though we are passing through the first six days of creation and then there are notes on the seventh day.  The New York premiere of Nathan Davis’s Inside Voice was a revelation, inside sound.

The voice itself became crucial in two works that followed. The many facets of the human voice were revealed. A dialogue between Rebekah Heller on bassoon and Alice Teyssier was created Ann Cleare’s teeth of light, tongue of waves.  Their instrumental and human voices occasionally blended into one mysterious tone. Accompanied by a string trio, the two tones which could twin were surprising and delightful.

Kate Soper is known for her multi-faceted take on the music of the human voice, sometimes articulating words, sometimes struggling to get out a portion of a word’s sound (and meaning) and sometimes relishing the voice’s interaction with instruments.  She quotes heavy duty thinkers and poets in her The Ultimate Poem Is Abstract, but even if you don’t understand “Est cogiatum ergo est,” you get the gist of the struggle. It is not only interesting, but fun in her hands, and beautiful voice. She sat amidst the instrumentalists, swishing past them at one point in a long floral gown.

Bringing pre-existing sounds into being, her voice often buzzed around our heads. We could not swat it away, nor did we want to. Soper is a composer, performer and arts administrator in addition to having a rich voice and a complicated, interesting mind.

Landscape after landscape unfolded before us.  ICE’s concerts are a journey across lands you’ve never traveled.  It's quite a trip.