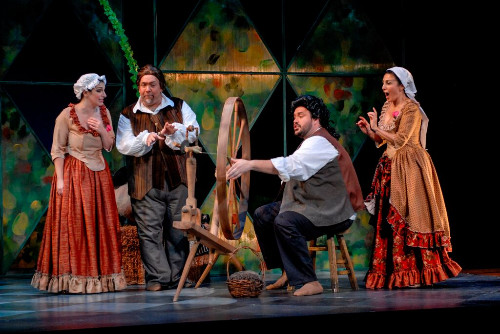 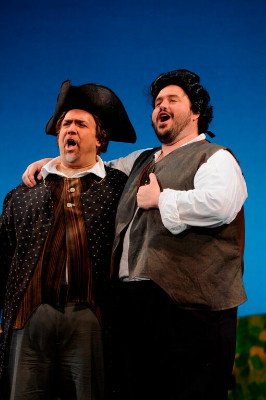 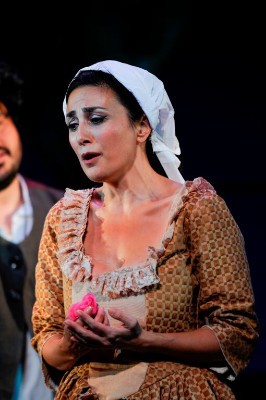 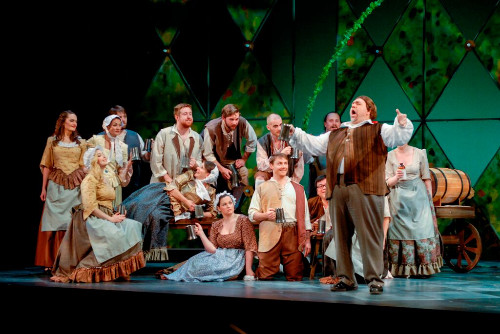 “Martha,” a comic opera with romantic trappings, is known to opera lovers for two numbers, the melting tenor aria “Ach, so fromm’,” often sung in Italian as “M’appari tutt’amor,” which von Flotow reused from an earlier work, and “The Last Rose of Summer,” which was written by the Irish poet Thomas Moore to a traditional Irish tune. So, neither of the two best-known numbers are original to the work. Which is no criticism: where would Rossini be if he hadn’t plagiarized from himself?

The opera itself was popular when premiered and was quickly performed throughout the German-speaking world. An Italian translation became equally popular. The Italian version became a big hit at the Met at the turn of the last century with Caruso taking the lead male role. But after a hundred or so years of regular performances, “Martha” fell out of the repertory, holding on only in German-speaking lands. Midsummer Opera’s website notes that the last performance in Boston was given by the Met on tour in 1961 with a remarkably starry cast: Victoria de los Angeles, Richard Tucker, Rosalind Elias and Giorgio Tozzi.

So, it was with an eager curiosity, if not without trepidation, that I and I suspect many other members of the audience attended Midsummer Opera’s production. At the least it would be another title checked off the endless list of operas heard about but not seen. These days we’re used to hearing long-forgotten operas, usually from the early days of the genre, make the transition from obscurity to mainstream.

“Martha,” I suspect, will not alas soon be joining them. It is a silly opera about silly people doing silly things. As a culture, we’ve grown too sophisticated for such frivolities, as opposed to true comedy, in the opera house, even as they hold on in musical theater, Broadway.

The plot doesn’t merit dwelling on. Lady Harriet Durham is bored silly with her frivolous life at the British Royal Court. She and her faithful maid, Nancy, decide to escape, dress as peasant girls, Martha and Julia, and go to the Richmond fair, where according to tradition, young woman are auctioned off to farmers as servants. Sir Tristan, a foppish elderly cousin, who dotes on Lady Harriet, reluctantly accompanies them. The two are bid on successfully by a pair of farmers, Plunkett and his foster brother Lionel. The “girls” go home with them, prove totally inept as servants and escape with Sir Tristan’s help at midnight. But Lady Harriet, as Martha, has fallen in love with Lionel, and Nancy, as Julia, has done likewise with Plunkett. The farmers later discover their servants, for whom they have paid a year’s wages, as a lady-in-waiting at court and her attendant out for a stroll. Lady Harriet rejects Lionel’s entreaties of love because of their class differences, but, deus-ex-machina, the ring his father left with Plunkett’s parents when he entrusted him to their care, reveals that he is in fact a nobleman with estates, and Lady Harriet accepts him as her husband. So love and real estate conquer all.

If you are easily pleased, “Martha,” offers a diverting two hours in the theater. In addition to its two enduring “hits,” which are previewed in the overture and then reprised repeatedly, the opera is melodic and goes down easily. There is an amusing quartet for the four principals in which the farmers attempt to teach their servants how to use the spinning wheel and a touching “goodnight” quartet for them as they prepare to retire for the night. The problem is that the opera is relentlessly melodic and relentlessly perky. There is no dramatic contrast. Only in the final scene is there a moment of emotional conflict between Martha and Lionel that suddenly makes the work come to life as a drama. But by then, it’s way too late.

The cheesy production didn’t help matters. Midsummer Opera doesn’t have much of a budget, but other local companies like Guerrilla Opera put on lively productions with little money, as has Midsummer Opera in the past - for instance, its memorable “Merry Wives of Windsor” two summers ago. The opera opened promisingly with a scene in Lady Harriet’s boudoir, simply evoked by a green and black harlequin patterned set, in which she languishes in her boredom with a swarm of maids surrounding her. They all wear sumptuous 18th century period gowns and wigs, and the low lighting spotlighting the central grouping creates a lovely stage picture.

That was the high point. Costume designer Elisabetta Polito must have spent all her budget on those gowns, leaving little for the peasants in the next scene. The stiff, generic outfits worn by the chorus, particularly its male members, look like what you’d find in a “Waiting for Guffman” production. And Stephen Dobay’s sets, used in all scenes, which seemed so appropriate for the boudoir, failed to evoke the peasants’ humble home or the Richmond fair, especially with the pair of tacky signs added in the latter instance to denote the site of the action. Lighting designer John Cuff seems not to have noticed that by raising the candlepower after the first scene, he only brought attention to the production’s flimsiness. Worst of all was Ken Pierce’s choreography, although it didn’t hit the depths of Midsummer Opera’s “The Bartered Bride,” in which a childrens’ gymnastic troupe replaced what should have been Bohemian peasants dancing polkas and other regional dances. The chorus – now, granted, they are singers not dancers – moved so stiffly and formulaically that it would be an insult to high schools everywhere to say it was of high school musical quality.

OK, we got the bad stuff out of the way first.

Musically, the production was very good, sometimes excellent. And its success paired with the failure of the staging argued for a concert version of the work, which I generally deplore – operas were written to be performed on a stage, not sung by singers lined up on the lip of a stage in front of an orchestra. But in this case, it would have been more effective. (But then I would have complained that it was not staged: Critics are never satisfied.)

Susan Davenny Wyner, Midsummer Opera’s music director, conducted with brio, bringing out the work’s orchestral strengths, particularly in the overture. A former singer, Wyner was noticeably sensitive to the needs of the vocalists.

The cast was in general superb As the prosperous farmer Plunkett, bass Jason Budd practically stole the show as he had playing Falstaff in “The Merry Wives” two years ago. His big moment at the start of Act II was in leading a drinking song, a de rigueur set piece in many comic operas, in praise of English beer. Budd’s flexible bass possesses a full range of tonal color, which he used articulately for expressive purposes. His extraordinarily long held note toward the end of his aria was the finest display of vocal prowess of the evening. And Budd doesn’t just sing, he makes you believe what he is singing, because, in the moment, he does. He sings with the natural joy that not all singers are able to muster, even if they produce beautiful sounds.

As his foster brother Lionel, Eric Barry sang with the voice of a classic romantic tenor. But he proved a problematic romantic lead, as he did last season as Jenik in “The Bartered Bride.” A man of substantial girth, he moved gracelessly and seemed encased in his unflattering costume. No matter what he was doing he seemed uncomfortable. The coup de grace for his character was the worst wig I’ve ever seen on stage or off. It looked like a dead muskrat lodged on top of his head with a mullet attached, in this case, the tail of the dead rodent. What was Polito thinking when she plopped that on his head? But even more than his ungainly looks and manner, what made his role unbelievable was the fact that no matter how sweet his voice, he sang without expression. Just the notes, ma’am. Barry rose to the occasion with “M’appari tutt’amor,” but it was all about hitting the sweet notes, which he did with ravishing tone, not expressing the memory of the woman with whom he fell in love. (He invested more feeling in its reprise.)

The two women in the cast were appropriately game. As Lady Harriet/Martha, soprano Joanna Mongiardo was amusing in the first scene, playing the bored aristocrat to the hilt. And her comic chops were evident in the Richmond fair auction and in her later ineptitude as a kitchen maid. She sang the appropriated “The Last Rose of Summer” - the rose is a gift from Lionel with whom she has fallen in love - with wistful romanticism. Vocally, Mongiardo sang with lovely tone throughout her range, but her voice sounded a little pinched as she negotiated high notes. As her maid and confidante, Nancy/Julia, mezzo Stephanie Kacoyanis was a good match, lively in her acting and expressive in her singing. In the first scene – I keep coming back to that because it was the most successful of the evening – their voices melded beautifully, although it was hard to understand anything they sang. (More of that in a minute.)

Last but not least, David Cushing – the go-to bass-baritone in the Boston opera world - was a wonderfully foppish Sir Tristan even if his strapping youth was not what was required for the doddering old Lord. He played the big booby, a standard stereotype of the British nobility, to its extreme, extracting the most humor possible from a relatively short role. His brief aria, “I am a Lord,” in which he tapped his toe to the rhythm, was a total delight.

Now about the inability to understand what was being sung. Midsummer Opera dispensed with supertitles because the opera was being done in English translation. But since the advent of supertitles 35-odd years ago, it has become apparent that even when opera is sung in the language of the audience, much is lost. Another local company recently put on a British Festival without supertitles, which was all right with some of the more traditional works, but with Thomas Adès’s “Powder Her Face,” in which the vocal lines are stretched to an extreme, it was impossible to understand much of what was going on. Same here. The two female singers made pretty sounds but the content of what they sang was largely lost. In the second scene when the auctioneer, bass-baritone Ryne Cherry, who deserved main cast credit, sang, “I can’t make out a word,” there was a sympathetic laugh from some members of the audience that had more to do with the performance than the scene unfolding on stage. It is a fact that it is hard to understand the words sung by voices at the highest and lowest registers. Since the soprano reigns supreme in opera, it is more a problem for them. They can’t be faulted – we pay the big bucks to hear the fat lady sing – but opera companies should acknowledge the fact, and in the era of supertitles it is irresponsible not to use them. In the age-old debate, what comes first, “la musica o le parole” (the music or the words), it is still a draw.

Still, thanks to Midsummer Opera for letting us hear “Martha,” and being able to check another obscurity off that endless list.