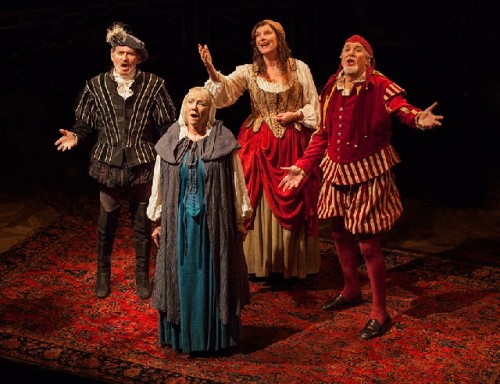 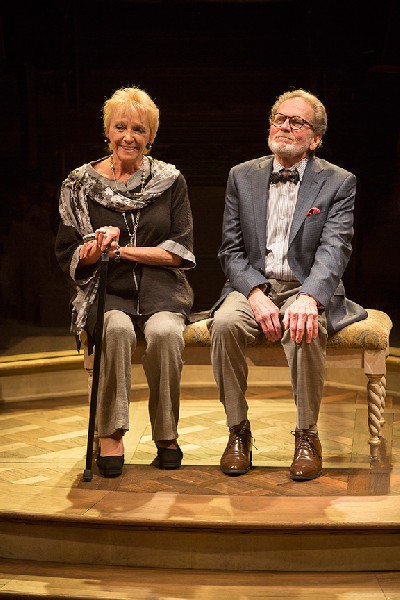 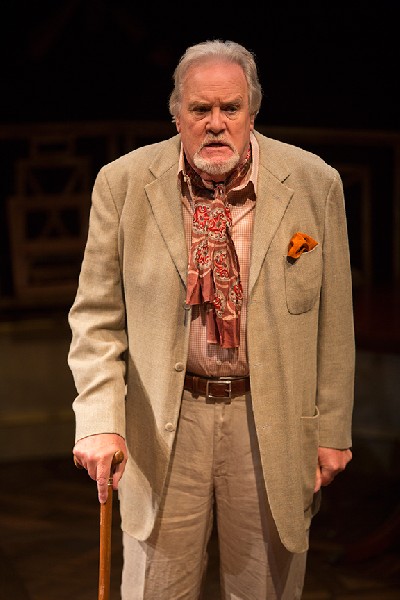 No matter how famous one thinks they are it always comes as a shock when they discover that they can no longer perform whatever they did to make them famous in the first place. The spirit is always willing it’s the aging flesh and vocal cords that hammer home that epiphany in the current production now treading the boards on the Sheryl and Harvey White Stage at the Old Globe in Balboa Park.

Playwright Ronald Harwood’s delightfully charming comedy “Quartet” is playfully and zestfully directed by Richard Seer. The play’s core story of four aging grand opera singers who now reside in an English country home for retired musicians, simply stated, must make a decision: one to get along with one another and two to perform for their fellow residents a concert they promised when they first arrived a year ago.

Harwood’s deliciously sly comedy features four meaty roles for actors of a “certain age”, and those roles are filled by four actors who perform as though they were born for their parts: Old Globe favorite Robert Foxworth plays shy and introverted Reginald Paget, a fussy, classically trained singer, of the old school who bristles at the suggestive shenanigans and randy language of Wilfred Bond, portrayed by Roger Forbes who fancies himself as the retirement home lothario.

Jill Tanner as Cecily Robson is oblivious to the sexual blandishments of Wilfred, mainly because she wears headsets while listening to the music of their old operas every time Wilfred’s randiness gets the better of him. She is bubbly Miss Optimism, the rest of the time. Elizabeth Franz portrays Jean Horton, the imperious grand dame of the opera world and the ex-wife of Reggie. When these “Three Musketeers” learn that Jean will be moving in as a permanent resident, all eyes and attention turn toward Reggie, who refuses to talk about the situation.

Foxworth is a character actor with a wonderful range. I fondly remember his Henry Drummond portrayal in “Inherit the Wind” at San Diego’s Old Globe, and his performances as Lyman Wyeth in “Other Desert Cities”, at the Taper and again at the Old Globe, among many others.

Roger Forbes makes his Old Globe debut with “Quartet”. After a distinguished 40 year career performing on stages in England and America, he is more than ready for his Globe debut. I suspect he’s performed a zillion of Alan Ackybourn’s comedies along the way. His Wilfred Bond portrayal is bawdy but harmless, much like like a favorite lap dog whose bark is worse than his bite (and most of the women residents know it).

Elizabeth Franz who plays the imperious Jean Horton is as regal-looking as one would expect of a Diva of the opera. Demanding to a fault, even irritating to others, but if one looks a little deeper, one would find a very vulnerable and frightened lady who can’t come to grips with her retirement and thwarts all efforts of help.

The creative team led by director Seer has his A-team working on this production. Set Design wizard Ralph Funicello places everyone in a proper-looking English retirement home. The only element missing would be the presence of the late great character actor Joyce Grenfell as the kooky lady in charge of the home. York Kennedy’s lighting and Christopher R. Walker’s sound design, along with costumes by Charlotte Devaux are first-rate contributors to a solid comedy production that has more than a few poignant messages to deliver along the way. On leaving the theatre, I overheard two couples saying, “this was so much better than the movie.” The decision to present the play in the round on the intimate White Stage was a wise choice.

Speculating that 90 percent of the opening night audience is receiving Social Security benefits, I feel safe in saying this comedy is definitely a lock when it comes to appealing to seniors. But I wouldn’t rule out the younger set from enjoying the state of affairs the characters find themselves in. After all, retirement is a destination we’re heading toward, like it or not.