Rubenology: The Making of An American Legend 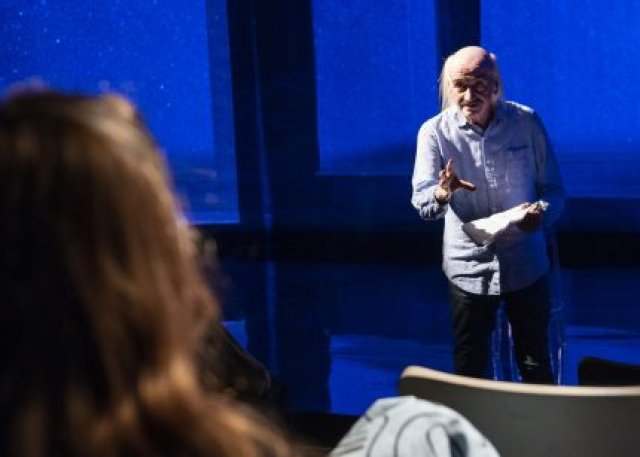 Photo by Magnus Stark Ruben Rabasa interacts with an audience member during his one-person show Rubenology: The Making of An American Legend. 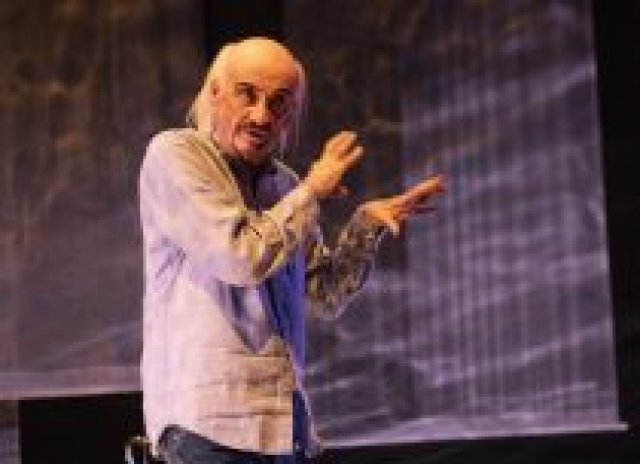 Photo by Magnus Stark Ruben Rabasa appears as himself in the world premiere of Rubenology: The Making of An American Legend.

Rubenology: The Making of An American Legend is a new one-person play whose title suggests a journey or process. But, the piece itself has a ways to go before it is ready for bigger stages.

The work, by playwright Vanessa Garcia and actor Ruben Rabasa, recently experienced its world premiere in a solid co-production. The co-producers were GableStage and Abre Camino Collective. The former is a nonprofit, multi award-winning professional theater company in Coral Gables, near Miami. The latter is an interactive storytelling studio. It is one “intending to create exceptional art,” according to a description in the show’s program.

By the time the play is over, you do not feel as though you have witnessed a journey or process. Rather, at this point in its development, Rubenology: The Making of An American Legend is a play in search of an identity.

For the majority of the piece, whose running time is about an hour, the tone is lighthearted. Much of the play comprises a series of humorous, even silly true tales from Rabasa’s life. He also interacts humorously with the audience. Then, toward the end of the piece, it suddenly becomes heartbreaking. Ultimately, the piece wants to leave us with a serious message about life’s fragility and its fleeting nature.

In fact, as the play begins, we are not sure why we should listen to or care about Rabasa (other than the fact that he’s an energetic, seemingly healthy 84-year-old man who can dance). He does not introduce himself. Also, we do not learn what he does until several pages into the script.

“That’s me…”I’m a legend,” Rabasa tells us at the beginning of the piece. “You don’t believe me? Sometimes I don’t believe it myself. But enough of that!”

Actually, at this point, it may be helpful for Rabasa to explain who he is, why he thinks he is a legend, and why he is talking to us. In addition, audiences may appreciate some exposition before he tells us about his “Rubenology.” Essentially, it is his beliefs about life. And it is nothing that we have not heard before. For instance, early on he tells us that “everything in life comes in three.”

Therefore, a bit later, he tells us that he will relate three stories from his life. One is about his first job (“it was greasy”), the second is about “the day I removed the dead man from my back” and then, “finally, I’m gonna tell you a story about wigs.” Only, Rabasa never tells us anything about wigs. Instead, the play becomes suddenly touching and then heartbreaking as he tells us about a tragedy involving his mother.

No doubt, Rabasa will move you with his words about why his mom was a special person in his life. “She was complicated,” he tells us.

Perhaps, then, Rabasa and Garcia might want to flesh her out. Certainly, with a running time of just about an hour, there is room to expand not only on her character but Rabasa himself.

You may have heard of Rabasa. Indeed, the 84-year-old has worked on more than 60 films and television shows. In addition, he received acclaim and an Internet following for the Netflix series, I Think You Should Leave. Also, Rabasa appeared in the theatrical production The Amparo Experience, a piece that sold out for eight months straight when it played in Miami in 2019. It is an immersive play that tells the story of the Arechabala family, the makers of the original Havana Club rum, who were forced into exile after the Cuban Revolution.

He delivers a mostly solid performance in Rubenology. One of the things you might wish to ask him is his secret to appearing healthy and robust at age 84 — information that he could also impart in the play.

At the beginning of Rubenology, the actor, resplendent in a glistening gold jacket, dances and sings to “Feeling Hot, Hot, Hot.” With a dark mustache and dark eyes, as well as a mop of shoulder-length gray hair at the back of his head, Rabasa bears a resemblance to actor Hal Linden. He speaks in a pleasant voice, his demeanor is friendly, and his comic timing delivers the desired effect. Also, his performance seems natural and spontaneous. But after the play turns serious, one might expect him to choke back tears, if not cry out loud when he talks about his mother and what happened to her.

Behind the scenes, Collado keeps the pace brisk but not too fast under her assured direction.

The set, by Frank J. Oliva, who also designed the realistic lighting, consists mostly of blown-up images of Rabasa during his younger years. Rabasa also appears in projections which Joel Zishuk designed.

With some reworking, Rubenology: The Making of An American Legend has the potential to become a powerful piece of live theater and enjoy a long theatrical life.