Chris Marker with his mascot Guillaume-en-Egypte 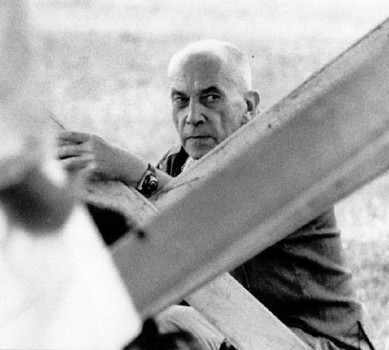 Chris Marker With His Favorite Mascot, His Cat Guillaume

Chris Marker has been a source of fascination and endless speculation since he emerged as one of the original voices of postwar French cinema. Mr. Marker defies categorization, a writer, a critic, a photographer, a filmmaker, a multi-media artist; he is the ultimate creative hybrid mind that just died at age 91.  Most known for La jetée, (The Pier); Le fond de l’air est rouge, (A Grin Without a Cat), and Sans Soleil, (Without the Sun) he is considered as one of the greatest, most respected, elusive, seminal filmmaker of our time.  An unmitigated independent artist, he adopted a pseudonym as well as an alter ego represented by his cat Guillaume-en-Egypte.  His extensive oeuvre is a testimonial to the history, memory and the passage of time.

Born July 29, 1921, Christian François Bouche Villeneuve became known as the exceptional Chris Marker.  He was always famously indifferent to the spotlight and the media frenzy.  A brilliant practitioner and early pioneer of the essay genre invented by Nicole Verdès in her 1949 film La vie commence demain, (Life Starts Tomorrow); he chartered an enthralling creative trajectory that began in the early 1950s, after the Second World War, during which he fought in the Resistance.  His best-known films are simultaneously playful while philosophical; interweaving filmmaking techniques and traditions of the documentary and fiction genres.

It is during the Helsinki Olympics in 1952 that he made with modest means his first film (Olympia).  Following the publication of his editorials, criticisms, poetry and fiction as well as his first novel, Le Coeur Net (The Clear Heart), in 1949, that was set in Indochina and whose central character is a pilot/aviator, he took a nom de plume or the pseudonym Chris.Marker.

In 1953, he wrote the narration and co-directed with Alain Resnais Les statues meurent aussi (Statues Also Die), a political and aesthetic documentary about African art and an acerbic criticism about French colonialism.

He created La jetée (The Pier) in 1962 that is deeply informed by science fiction and is a short poem composed of a series of photographs in black and white.  Banned by French censors for its political content for more than 10 years, the film received the prestigious Prix Jean Vigo (The Jean Vigo Price).  In a 2002 article in the British newspaper The Guardian, film critic and historian David Thomson affirmed that La jetée could be the one essential movie ever made. The film is a meditation on cultural differences, memory and travels.  It has inspired both directors Mira Nair’s shots for the 2003 film Namesake but mostly Terry Gilliam’s film 12 Monkeys.  It also gave its name to a bar in Tokyo, in the Shinjuku-ku district.  Marker maintained throughout his life very privileged relations with Japan, where he was and is literally worshiped.

During the same period, confident in his political leftist convictions, he created masterpieces tracing and documenting the century’s major events.  Filming in Cuba after the revolution ¡Cuba Si! in 1961, before distancing himself from the Castro regime.  In 1963, he co-directed with Pierre Lhomme Le joli mai (Beautiful May), a documentary subsequent to the signing of the Evian treaty describing French citizens attitudes and psyche toward the French-Algerian War.  It was narrated by Yves Montand’s to whom he dedicated in 1974 La solitude du chanteur de fond (The Loneliness of the Background Vocalist).

He recounted his travels to 26 countries in Si j’avais quatre dromadaires (If I Had Four Camels) borrowing the title from a short poem in Le Bestiaire by Guillaume Apollinaire in 1966.

He collaborated and participated with his French avant-garde colleagues Jean Luc Goddard, Agnès Varda and Joris Ivens in a joint production Loin du Vietnam (Away from Vietnam) protesting the US intervention in Southeast Asia that resulted in banning him from entry to the USA in 1967.

In the wake of France May 1968, Chris Marker was an activist participated in civil disobedience with the Iskra group, before resuming his own projects and films.  In 1986, he dedicated Mémoire pour Simone (Memory to Simone) to his close friend, the actress Simone Signoret.

With the film Le Fond de l’air est rouge (A Grin Without A Cat) in 1977, he delineates the decade’s hopes through a perceptive, descriptive historical epic and committed rational analysis.  It was followed in 1983 with the magnificent Sans Soleil (Without the Sun) a mélange of ethnography, philosophy and poetry where Mr. Marker’s dense poesis of montage and voice comes to its full expression.  The film lyrical and political itinerary traces his own peripatetic journey from Guinea-Bissau to Japan, from the Ile-de-France to Iceland.

Mr. Marker was also interested in his fellow filmmakers, he made Le train en marche (The Train Rolls On), 1971 and Le Tombeau d’Alexandre aka (The Last Bolshevik), 1992 two essays on Soviet cinema and history centered on the neglected director Alexander Medvedkin.  Une jounée dans la vie d’Andrei Arsenevich (One Day in the Life of Andrei Arsenevich), 2000 is an elegy to his friend Andrei Tarkovsky while the 1985 A.K. is a portrait of Akira Kurosawa, while he was filming Ran.

Chris Marker’s films proliferate with alter egos and avatars leaving all his public appearances to Guillaume-en-Egypte, his own ginger cat that appears as his proxy, mascot and muse in the flesh and or in cartoon form.  In his pointed documentaries, Le fond de l’air est rouge (A Grin Without a Cat), 1977 considered his magnum opus, he examines the New Left Movement in France, the Vietnam war and the 1973 ousting of Chilean President Salvador Allende.  In Chats Perchés (The Case of the Grinning Cat), 2004 he documented France’s political mood after September 11 attacks.  Both films integrate images of smiling cat graffiti that began to appear in Paris at the time.

Marker’s also succeeded in presenting the repressed and repressive history of dissents in the US with La sixième face du pentagone (The Sixth Side of the Pentagon), 1967 and the dissonance between the global socialist movement’s promise with its actual presence in the world with Le fond de l’air est rouge (A Grin Without a Cat).

In his quest for a liberated narrative form and exploration of the slippages and superimpositions of individual and collective memory, Mr. Marker discovered new medias, which gave him additional autonomy to explore in video, digital technology and cyberspace with Silent Movie, 1995 and the feature Level Five, 1997.  He has been drawn to experiment with an incredible range of image mediums and technologies. In his early years, he started with the photo book followed by small gauge 16mm and Super-8 cinema then to video, video games and, most recently, the CD-ROM and Internet.  In 1997, he published Immemory, a CD-ROM using all the resources of multimedia whereby, he broadcasted on the Internet’s his latest short film, produced in 2006, Leila attaque (Leila Attacks).

Mr. Marker had an uncanny ability to predict the future and to be ahead of everyone already.  In 2008, the Design Museum in Zürich sponsored the exhibition Chris Marker: A Farewell to Movies.  He together with Viennese architect Max Moswitzer, created a cyber museum in the virtual world Second Life in order to reexamine and share examples of his films, photography and installation work.

In 2011, he was the honored artist/star at Les Rencontres Photographiques d’Arles (The Photographic Meetings in Arles).  The 42nd festival exhibited more than 300 pieces of his works, highlighting his last photographic series made in the Paris metro, Passagés (Passengers), 2008 - 2010.

His last film appears to be a short trailer about the history of cinema, commissioned for the 50th anniversary of the Viennale Film Festival in October. The Locarno Film Festival is scheduling its screening on August 4, 2012.  Mr. Marker gave one of his latest interviews through the virtual medium in May 2009 to the Harvard Film Archives in Cambridge, Massachusetts. It followed the screening of his film Chats Perchés (The Case of the Grinning Cat) that completed a week-long retrospective of his work.

“His oeuvre followed and was in tune with the second half of the twentieth century while examining at close safe distance the historical events that have shaken the world: Cuba, The Soviet Union, China’s Communism, the Vietnam War, France May 68, Chile, the workers’ struggles, the struggles for emancipation and independence.” stressed Serge Toubiana.

Mr. Marker always preferred to let his images tell the story.  Less than a dozen of his portraits exist, his interviews are even scarcer.  In 2003, a DVD was released of both his films Sans Soleil and La jetée.  Refusing to be photographed or interviewed, Chris Marker was not a misanthropist as his many friends attest. “He was an intently honest man, politically and cinematically,” states his close filmmaker friend Costa-Gavras.  Marker’s viewed history as fluid, a humoristic focus, mystery and mystique were somewhat essential to this incomparable visionary.