The Big Bang In Suburban Miami

Musical-Comedy Send-up at Actors' Playhouse at the Miracle Theatre 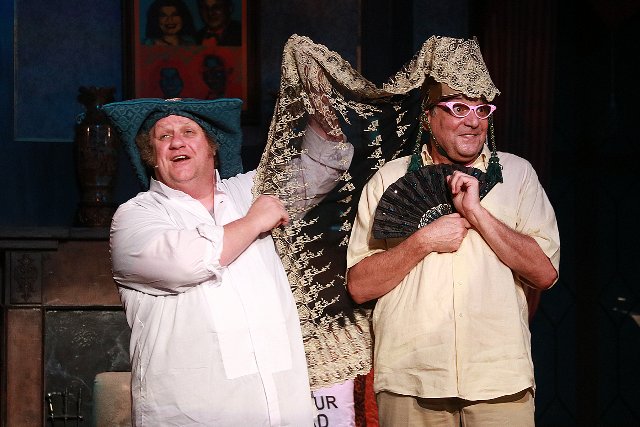 Photo by Alberto Romeu Ken Clement and Nick Santa Maria take us back in time in The Big Bang. 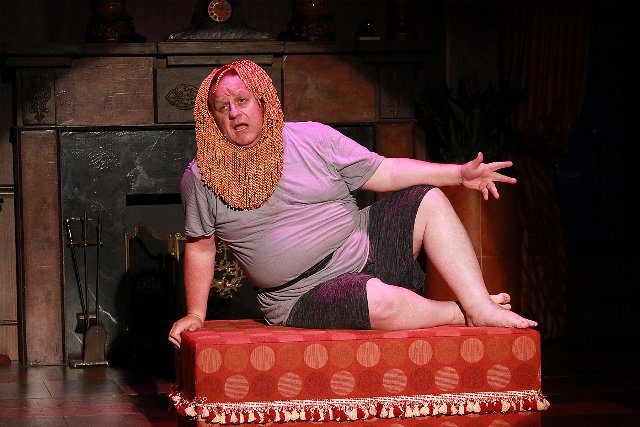 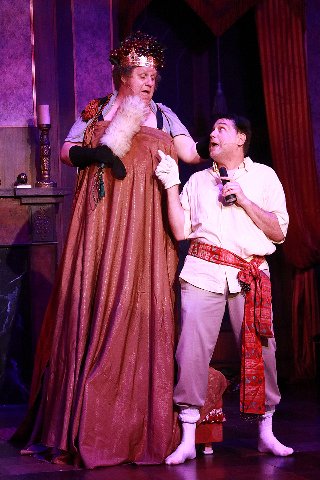 Photo by Alberto Romeu Ken Clement is just a tad taller than Nick Santa Maria at one point in The Big Bang.

Certainly, he’d be salivating and drooling over the proposal a couple of zany producers put forth recently.

Surely, you recall Bialystock. He’s the fictional slimy, sleazy producer from the Mel Brooks’ hit The Producers. If only he’d heard about this particular sure-fire flop, his eyes would widen considerably. Why, he’d be seeing sights in Rio before he could even hop a cab to the airport.

Consider: A whopping $83 billion campy, unwieldly, musical without a premise or focus about the history of the entire world. It requires a cast of 318, more than 6,000 costumes, some 300 prosthetic devices and a full orchestra. Oh, and the musical’s run time is roughly 12 hours. That dwarfs both parts of Angels in America by about four hours and Harry Potter and the Cursed Child by roughly seven hours.

In stark contrast to the aforementioned 12-hour bloated behemoth is the piece as the producers present it to potential backers. They perform snippets of their show with eye-popping creativity in 90 minutes without an intermission.

Actually, The Big Bang is a musical-within-a-musical. Actors’ Playhouse at the Miracle Theatre’s audiences love it. In fact, in the suburban Miami company’s 30-year history, it’s one of their most beloved shows, according to board chairman, Dr. Lawrence E. Stein. With that in mind, the Steins, artistic director David Arisco and Co. have brought back the show. Audiences last saw it at the Miracle in 2003 and 2005. This year, it runs through Sept. 2 in the upstairs balcony theater.

Let us toast Actors’ Playhouse for bringing back to its stage this unabashedly silly, often laugh-out-loud musical featuring the unexpected.

Book writer and lyricist Boyd Graham, as well as composer Jed Feuer, present The Big Bang as a backers’ audition for a big musical titled The Big Bang.

Part of what’s impressive about the show we see is its scaled-down size, but with plenty of heart, humor and creativity. This entertaining show proves that live theater doesn’t need big-budget technology and invisible stage magic for audiences to suspend disbelief.

Indeed, under Arisco’s fluid direction, talented actors Ken Clement and Nick Santa Maria seamlessly use props and set pieces to tell the story of the world, whirlwind-style, complete with anachronisms. Accompanying them in their singing and storytelling is musical director/keyboardist David Nagy, listed in the program as “The B.B.B (Big Bang Band)." His varied, flawless accompaniment, with emphases and underscoring in just the right places, adds whimsy, drama and historical flavor to a variety of periods.

Armed mostly with props on stage, Clement, who is reprising his role, and Santa Maria, hilariously and convincingly transform into everyone from Adam and Eve, Attila the Hun, Julius Caesar, Eva Braun and Columbus.

Clement and Santa Maria play perhaps a dozen or more characters. The performers, who sing robustly and expressively, seamlessly switch from one role to another. Furthermore, they deftly modulate their voices to the point that they become each historical figure.

Fortunately, we witness history with a heaping helping of humor. If you’re a high school or college student, this is exactly how you’d want to learn about the past.

Of course, it helps that there’s plenty of surprises that await us. You just never know what these performers will, for example, use for a wig, costume or a pretend musical instrument.

In addition, the phone can ring at any time and who knows the person on the other line. The caller could be executive producing director Barbara S. Stein. She rings at the beginning of the show to remind the potential backers (played by us, the audience) and the fictional producers about Actors’ Playhouse eclectic 2018-2019 season.

While most if not all of those shows use the “Fourth Wall,” it’s non-existent in The Big Bang.

Undoubtedly, the actors freely communicate with the audience…and you never know if they might single you out. Initially, one of the performers dons a tuxedo. By contrast, the other sports an un-tucked dress shirt. Credit Ellis Tillman for the costumes.

Certainly, the tux reinforces the elegant atmosphere in which we find ourselves. The setting is the present-day, upscale New York City apartment of an obviously wealthy couple.

The environs suggest an old-fashioned, but well kept, comfortable and luxuriant place. Set and properties designer Jodi Dellaventura has furnished the set with antiques, a piano, an expensive, old-fashioned chandelier and expensive-looking furniture. The Park Avenue home belongs to Dr. and Mrs. Sid Lipbalm. They’ve generously lent their dwelling for the purpose of the backers’ audition.

This modern-day, opulent setting, lit with elegance by designer Eric Nelson, will become places such as The Garden of Eden and ancient Rome. However, even though the setting remains the same, we’re willing to travel back in time with these performers. That’s because they endow their roles with enthusiasm, sincerity, spontaneity and deft comic timing. Much of the humor is slapstick, but the action is always engrossing.

The songs feature playful, upbeat tunes, witty lyrics and clever rhymes. However, none of the songs are memorable. You probably won’t recall them even five minutes after the curtain call. And what of the song titles? Except for the creatively named “Free Food and Frontal Nudity,” sung by Adam and Eve, you’d expect more humor and thought to go into song names, especially for an off-beat musical such as this. You can’t help roll your eyes at uninspired titles such as “Potato,” “Pyramid,” “Motherhood” and “The Coliseum.”

On the contrary, the exuberant, engaging musical (not the musical-within-the-musical) is just a taste of what the fictional producers plan to put on with the backers’ “dough.” Their project is an essentially a “And then this happened,” show, featuring a collection of loosely connected skits and no character-driven songs which enhance emotion.

The Big Bang (the musical-within-the-musical) would most likely join a legion of flops – even, perhaps, Springtime for Hitler, the fictional musical-within-a-musical from The Producers.

But wait, didn’t Springtime turn out to be a mega-hit?

In the theater, you just never know how audiences will react.

The Big Bang continues its run through Sept. 2 at Actors’ Playhouse at the Miracle Theatre, 280 Miracle Mile in Coral Gables. Tickets range from $15-$64. Showtimes are 8 p.m. Wednesday through Saturday and 3 p.m. Sunday. The company has scheduled a special weekday matinee at 2 p.m. Wednesday, Aug. 1. Arisco will lead a talk-back with the cast following the Friday, Aug. 3 performance as part of the company’s “Second Friday’s” series. For tickets, call (305) 444-9293 or visit www.actorsplayhouse.org.