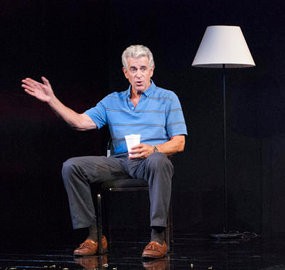 Cedars is a one man show starring James Naughton. 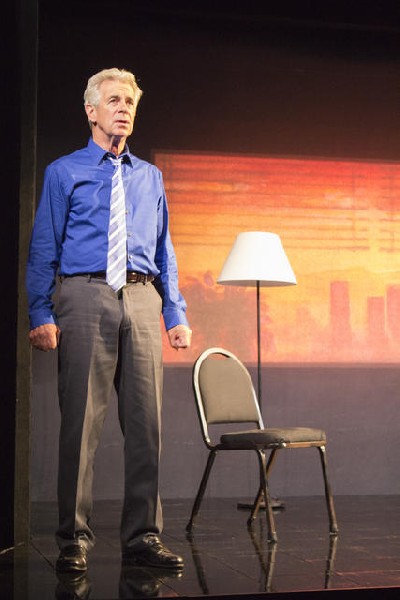 A one sided dialogue with his comatose father.

It takes chutzpah to star in a one man show set in a hospital room at Cedars-Sinai, in Los Angeles. The main character, Tony winner James Naughton, is speaking to a comatose father, unseen on stage, for the entire play.

Naughton has risen to the challenge.

Depicting Gabe, a 59 year old lawyer, whose life is unraveling, Naughton uses all of his formidable acting skills to make this character alive. He is someone you care about even though not particularly likable. It takes a lot of acting charisma and talent to portray Gabe for 90 non stop minutes.

Naughton, who has won two Tonys as ‘Best Actor in a Musical’ for Chicago and City of Angels (he also won a Drama Desk Award for the latter), here switches to drama.

He has appeared on-screen in Gossip Girl, Hostages and The Devil Wears Prada, playing
Meryl Streep’s husband. He has also been in independent films like Childless with Barbara Hershey and in The Weinstein Company’s Factory Girl playing Sienna Miller’s father. His other Broadway credits include Democracy, Four Baboons Adoring the Sun, I Love My Wife, Whose Life Is It Anyway, Drinks Before Dinner and Losing Time.

Naughton has also directed Arthur Miller’s Tony nominated production of The Price and Paul Newman in Thornton Wilder’s Our Town.

As anb actor he has brought all his theatre experience to the World Premiere of Cedars. With finely tuned direction by his daughter, Keira Naughton, he has let the audience experience a range of complex emotions. We get to know him as a son, husband, father, lawyer and, at times, a complete wreck. Naughton’s voice is a true instrument, displaying anger, humor, despair, bitterness, weakness, fear.

In the first scene, Gabe enters with anger, complaining about the hospital and describing it as a ‘JCC for invalids.’ As he speaks to his comatose Dad, he tells him ‘consciousness is overrated.’ There is an undercurrent of sadness he conveys under humor that underlines this remark.

When Gabe enters the second scene, he is more subdued, talking about his wife Jessie, and then veering into his feelings about his sister, Deb. She has been chasing men all her life, and he asks his Dad, "Ever wonder what it’s like to be a crazy lady?’"

In the third scene, Gabe comes in troubled about his marriage. His wife wants a trial separation, and his response is: "Marriage is a working farm, not a petting zoo." He talks about his value on the open market, as well as hers and then compares them. Even with such crass talk, Naughton can arouse sympathy in the audience, as you see him struggle with disappointment and humiliation.

As the next scene progresses, Gabe gets graphic about insecurities regarding his wife’s new boyfriend.  The bitterness is often masked by humor and sarcasm.

In the final scene, much of Gabe’s anger returns now aimed at his Dad.

While there is good writing in this play, with many sharp and funny lines. It can, however, use editing. Erik Tarloff, the playwright, has extensive writing experience in movies and television. He has written over one hundred situation comedy scripts, including multiple episodes of M*A*S*H, All in the Family, The Bob Newhart Show and others.

Some of the language is too smart for the situation, and the situation itself is a difficult one to portray on stage. Some of the sexual content seems forced and overly graphic, not serving the development of the character.

The play is worth seeing for Naughton’s performance. The minute he walks on stage, he has your attention and he keeps it during this one act play. This is an evening of theatre worth seeing.