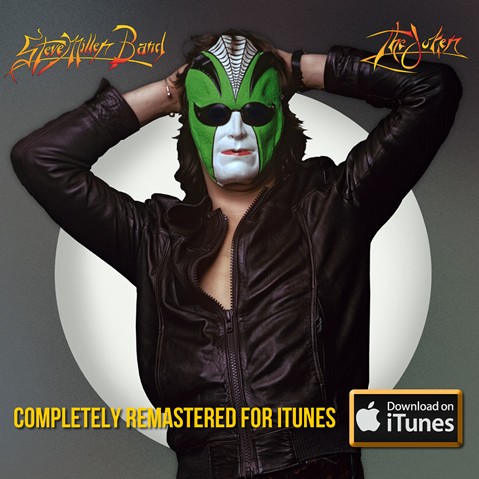 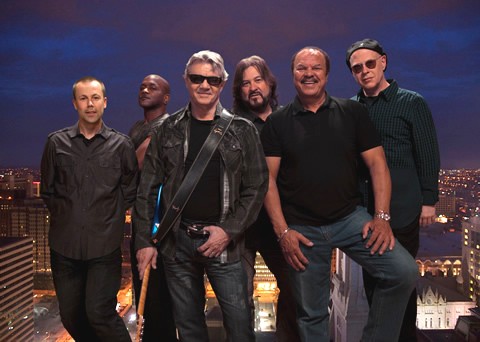 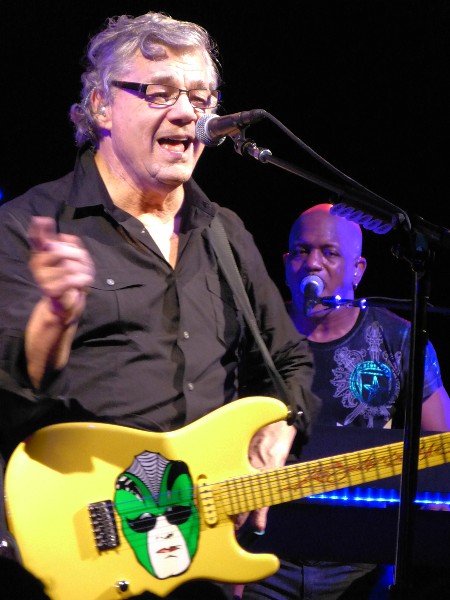 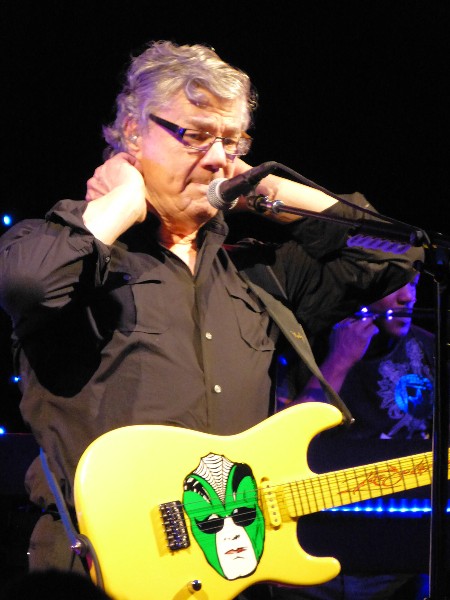 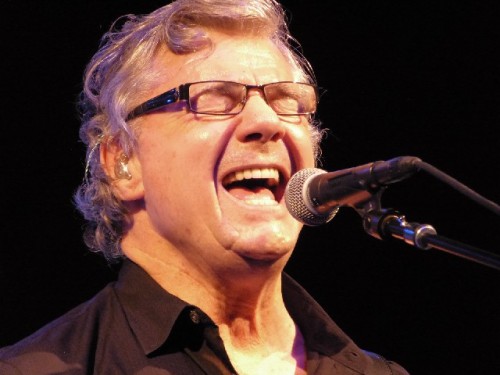 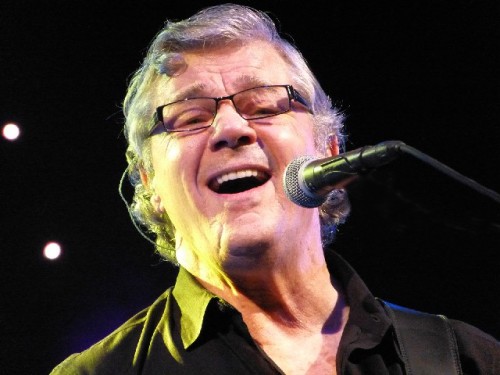 On a Monday, an off night for the BSO, the Shed at Tanglewood rocked to the geriatric Steve Miller Band.

For the first half hour Miller played guitar backing soul man Sonny Charles in a series of blues covers.

Eventually they would cut loose and come to their feet during the last half hour of a two hour show when he delivered a series of greatest hits.

What was performed in between was complicated by an awful sound mix at least from our up front seats. It may have been better mid Shed or out on the lawn.

All we could hear was the over amped drum kit and bass. We saw Miller playing guitar but during louder, non descript songs, the dim, tinny sound seemed to be coming from another planet. Just forget about trying to follow the lyrics.

It was less problematic during ballads or the couple of songs when Miller sat and played acoustic guitar.

Not a particularly charismatic showman Miller eventually got around to interacting with the audience. It really didn't matter as we came for his legendary music. I just wish we could have heard more of it.

While not emtirely certain it seemed that they opened with “Jungle Love” “Take the Money and Run” “Nobody Can Love You the Way I Do” “Magic in Your Eyes.” Charles titutbated through the blues “Further on Up the Road.” Then “I’m Gonnah Be a Distrubance in Your Mind” with a tasty guitar solo for “All Your Love, I Miss Living You.”

The anthem “Living in the USA” was dedicated to the young men and women serving in the Armed Forces.

Gazing out into the audience Miller riffed on “All you old Jokers out there.”

He related how when they started to organize the current tour,  which stared May 17th in Albuqureque  and ends 35 shows later at the Magic City Blues Festival in Bilings, Montana August 10,th he wanted to do something special.

That turned into the 40th anniversary Joker tour. This announcement was followed by “You’re My Sugar Babe” and other hits from that seminal album.

It seems the bad ass “Mary Lou” stole the keys to his Cadillac.

Looking out at the the audience he drew a circle in the air to describe the small dimensions of the legendary music hall The Filmore in San Francisco. The venue flourished under Bill Graham. It was open seven days a week with an eclectic range from Ray Charles, Charles Lloyd, to the Modern Jazz Quartet including emerging bands like Jefferson Airplane, Grateful Dead, Big Brother and the Holding Company.

“On Thursday nights it was the Steve Miller Band” he said. “We held the record for most performances by a single band, 120 nights.” Then just 22 one of Miller’s musicians was Carlos Santana who went on to form Santana. “They had the greatest percussion section in rock. I want to dedicate  'Shu Ba Da Du Ma Ma Ma Ma' to Carlos.”

With a change of pace he sat and played acoustic guitar on “Gangster of Love.” It was also given a rock refrain as a part of “Joker” during finales. He described singing the song from the time he was an aspiring performer of 13. He used a high pitched falsetto to evoke memories of that long ago era.

From The Joker he performed an acoustic version of “The Lovin’ Cup.”

He introduced Jeff Kearns from Nashville who joined him on pedal steel guitar. From The Joker they performed “Give Me Something to Believe In.” Then “Dance, Dance, Dance.”

Easing into the home stretch Miller finally unleashed the pop segment of the show picking up the pace and audience energy level with 1976’s familiar “Fly Like an Eagle.”

The granny at the end of the row was rockin like it was Woodstock. In front of us a twenty something was alternating between snapping shots with her I Phone then sending them with tweets and text messages to her friends.

By then the occasional fan was on his or her feet as some filtered down the aisles to take up close photos. Eventually they poured into the aisles, and somewhat decorously, rocked with the band. Rest assured there are no mosh pits at Tanglewood.

By now the clock read 8:45 and time for a kick ass finish.

Everyone grooved to “Rock’n Me.”

There was that cosmic, psychedelic intro to the classic “Space Cowboy.” Far out man.