The North Pool By Rajiv Joseph 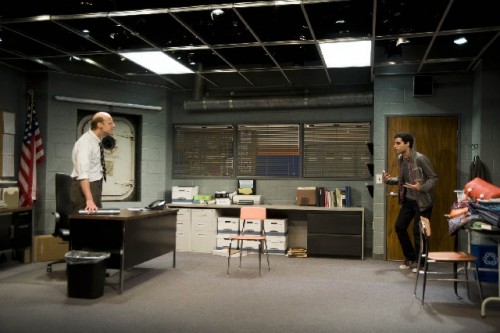 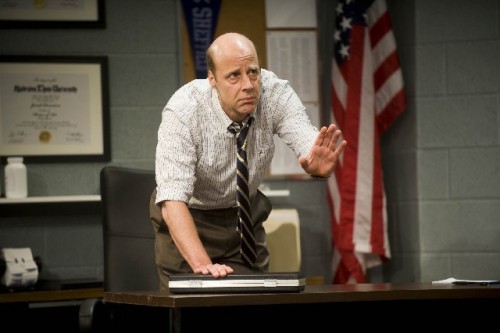 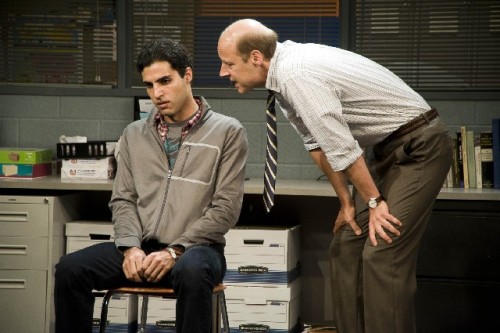 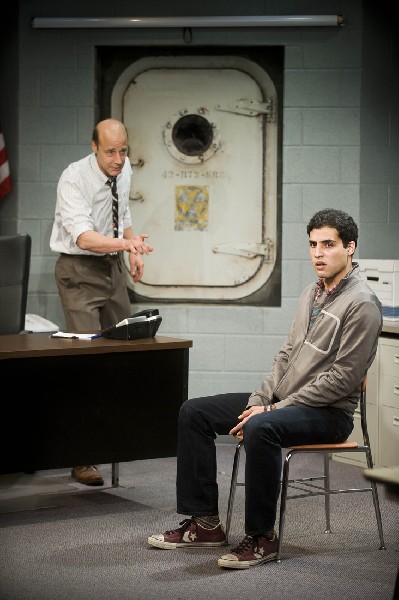 Behind the desk the door to the labyrinth. 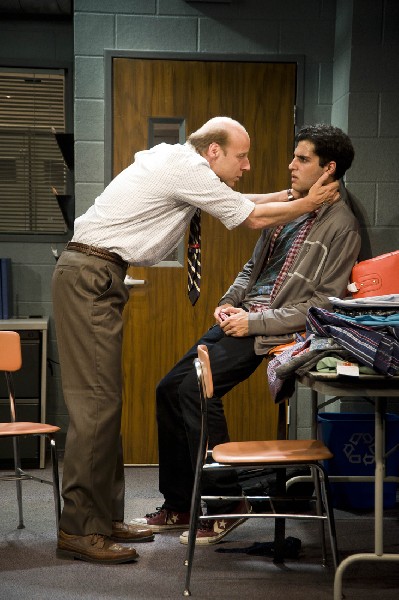 Despite differences they are linked to a tragedy.

As Julianne Boyd, artistic director of Barrington Stage informed the audience prior to the opening of The North Pool by Rajiv Joseph on the St. Germain Stage, it is a mandate of the company to use the smaller venue to present new works.

In addition to world premieres, like Mark St. Germain’s Dr. Ruth All the Way, which returns for a second run in September, Boyd programs works in preview, as well as plays that deserve a second or third production.

The current work premiered in California and is now being presented on the East Coast. It is slated for a New York production this season at the Off Broadway Vinyard Theatre.

The young playwright, Joseph, who worked on the play at Barrington with a long time collaborator, the director Ginovanna Sardelli, is best know for the Broadway production of Bengal Tiger at the Baghdad Zoo. The play, a finalist for the 2010 Pulitzer Prize, starred Robin Williams as the Tiger.

It is the end of the school day before Spring Break. On the loud speakers we hear announcements from the Vice Principle and a scramble of students at their lockers eager to vacate.

In a generic, cinder block dominated office, with windows (obscured by lowered blinds) leading to a corridor, we find Dr. Danielson at his desk when Khadim enters. The set designed by Brian Prather, with a map of the world, a plot point, on the wall behind the desk signifies no frills public education. It is in marked contrast to the posh private school which Khadim abruptly left under controversial circumstances.

The dialogue starts casually. There are some amenities as Khadim is drawn into what is initially presented as a chat and friendly conversation. Dr. Danielson even feigns not knowing the student’s name or recalling why he has been summoned. As the plot unravels it is revealed that Dr. Danielson knows a great deal about the student and ultimately the horrific story of the suicide of a gifted, but troubled student, Lia Winston.

Through underplayed inquiry Khadim is drawn into a pattern of lies and autocratic deceptions. While, as an administrator, Dr. Danielson has the upper hand that unravels as Khadim views him with escalating scorn and contempt. In his view they are far from equal and he suffers the Vice Principle’s authority with hauteur.

There is pursuit of a level playing field between the initially mismatched adversaries. By the end of the play there is a struggle for the moral high ground of a horrific disaster in which they are inadvertently entwined.

Quite methodically, Dr. Danielson catches Khadim in a web of lies for which he produces more and more statistical and physical evidence. At a tipping point, and ever more defensive, Khadim fights back with rumor, slander and innuendo. As the mud slinging intensifies the audience is absorbed trying to follow just who has the upper hand.

Effectively, Joseph pursues hot button issues of race, religion, wealth and power. He explores how those threads weave through academia at every level. These are issues which I saw first hand when failing students leveraged family wealth and  influence, through deans and administrators, to undermine the authority and grades of professors.

Recall how during the grounding of all flights, immediately after 9 /11, planes departed from Logan Airport, with an assist from the Bush administration, evacuating members of the Bin Laden family. In another incident a drunken Saudi prince, a student at Suffolk University, ran down and killed a pedestrian late at night on Charles Street. Under diplomatic immunity he left the country without prosecution. It has been reported that he is petitioning for reentry into the U.S.

Khadim asks if Danielson is a “real doctor.” Yes, a Ph.D. “So then you are a philosopher?” Digging deeper Khadim wants to know how much he earns. Reluctantly a salary of $70,000 is put forth. In Kahdim’s world that’s a pittance. Saudi servants make more than that.

Pursuing ethnicity Dr. Danielson presses about Khadim’s parents, their business, and ethnicity. Currently they are in Saudia Arabia, so is Khadim Saudi? Does he have concerns for their safety? Despite that map on the wall, compared to Khadim, it appears that Dr. Danielson doesn’t know much about the world.

Naively he asks “What’s Saudi Arabia like?” The bland and obvious answer is “It’s hot.”

Pinned down, Khadim states that he was born in Damascus and is Syrian but his parents are Iranian. “My first language is Farsi” he states. “…And my second language was Arabic. And my third language was French. And my fourth language was Italian. And fifth language was English. And my mother taught me how to write a thank you note in Sanskrit. And I know how to do calligraphy. And I spent most of my childhood in Paris, but also in Greece and Turkey and only some of the time in Riyadh, and before we moved to the States we lived in Mauritania. So what am I? I’m Syrian. I’m Middle Eastern; I’m Muslim, and what else. What else don’t you know about me? What else is in that file… How many languages do you speak?”

How disrespectful. In Spanish he calls the Vice Principle’s mother a whore, adding "suck my dick." It is just one of many aspects of his moral bankruptcy and sense of entitlement. While not selling pot like his buddy “The Doz” he has a basement business pedaling designer clothing out of his remote locker near The North Pool.

He also smuggles parrots stuffed in tubing from an accomplice in Mauritania. There the birds sell for just $2 but are worth $400 in the U.S. Most perish but the few nursed to health turn a nice profit. They were shipped to his former prep school because his parents would surely not approve.

Caught up in the mail one package of birds arrived stinking. The Head Master discovered a shipment of 20 dead and maggot infested parrots. While hushed up Khadim was expelled.

Dr. Danielson wants to know how he escaped prosecution from U.S. Customs? His parents took care of it. It seems he can do anything with impunity. For punishment he was not allowed a ski vacation in Europe.

Compared to the plodding but honest administrator, Khadim, corrupted by wealth and power, lacks a moral compass.

The Map. That plot point. Behind it is a now sealed door which led to a system of tunnels through the school building. During the Cola War era it led to the so called North Pool a nuclear bomb shelter. There were student evacuation drills.

The now defunct system is a remnant and signifier of a labyrinth of secrets and lies that ensnare the protagonists of this tautly structured drama.

All aspects of this play- acting, directing and production- have been well presented for a compelling and spell binding evening of theatre. It will keep you on the edge of your seat.