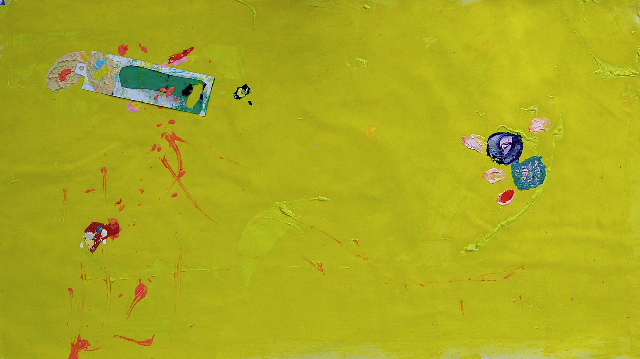 A series of works Sea and Stone: The Thimble Islands—Paintings by Arthur Yanoff” will be on view at Reynolds Fine Arts in New Haven opening on September 9.

Another iteration of this series was previously shown at Mattatuck Museum in Waterbury, Connecticut.

What follows is a review of the  Yanoff series from an exhibition in the summer of 2016.

The Thimble Islands are an archipelago of more than 100 pieces of land in Long Island Sound, off northeastern Connecticut. Some are big enough for people to live on, but many more are just tiny granite outcroppings. Arthur Yanoff visited them a year or so ago, and created a sequence of abstract paintings about them. This is now the subject of a charming little exhibition at the Mattatuck Museum in Waterbury, Connecticut.

The show is called, “Sea and Stone: The Thimble Islands—Paintings by Arthur Yanoff” (through July 24). It has only 12 paintings in it, ranging from small to only good-sized, but its colors are bright and jewel-like, and its spirit is cheerfully audacious, creating an ebullient mood.

Yanoff, who is based in the Berkshires, has over the years developed a technique that combines swathes, swabs and dabs of acrylic paint with small collage elements (usually bits of paper, but sometimes more substantial objects).

This turns out to be an ideal way to suggest small islands, rocky outcroppings, bits of flotsam and jetsam and occasionally living things– all floating upon or soaring above the open water.

The effect is especially persuasive when the canvas is horizontal, and one feels that one is looking down on it from an aerial view.

On the other hand, a vertical may create the feeling that one is looking at a cross-section of the Sound, with the lower part of the canvas suggesting underwater phenomena.

Five paintings stand out in this ensemble. Three of them have fields of blue or greenish blue, and as such are the most directly anchored in nature.

It boasts a little patch of real fisherman-like net down in the lower left-hand corner, and a pair of painted ovals that suggest the wings of a gull soaring in from the right-hand side of the picture.

A second – this one with a very deep-blue field—is “Submerged” (2013-15) It is a vertical, about 55” high and 37” wide, and it suggests a sideways view, like we are underwater, gazing across ocean depths.

It is ornamented at the top with a big whirling pink form augmented with bold blobs of yellow and red to the right, and balanced off on the lower left with a tiny yellow area and tinier blue-greens.

A third with a medium blue field is “Roger’s Landing” (2013-15). This is another vertical, about 35” x 28”, with blue depths on the lower part of the canvas, but a jazzy stripe of sunny yellow across the top.

This stripe is ornamented with even jazzier collage elements – red paint blobs, a piece of white cardboard like those which come from a dry cleaner enclosing a hanger, and a scattering of small, horseshoe-crab-shaped narrow cords that look like they’d been made from the elastic bands used by little girls to anchor the ends of their pigtails.

Two more of these paintings, however, aggressively depart from the naturalism of blue fields and achieve different, separate triumphs.

One is a cagey little vertical called “Capsized” (2014). Measuring about 24” x 14”, it has a vivid orangey-red field. This is decked out in larger, paler gobs of peach and gray, and very small drips and bits of collaged tape. The whole gives a pleasurably claustrophobic feeling, of seeming to go down, down, down for a third time.

Finally, a large horizontal painting faces the entry. This is “Windward Mark” (2013-15), and it sets the tone for the exhibition as a whole. Measuring about 43” x 79”, its field is a sunny yellow, with small painted and collaged elements harmoniously balancing each other off at its extremities.

On its right, we have rounded dabs of blue, green, pink, and red—plus a long schmear of raised yellow paint. To its left, at the top, we have a small rectangular cardboard cut-out piece with aqua at its holey center; below it at the left is a small red matted collage shape and various dabs of peach, yellow, etc.

The rectangular cardboard suggests a raft or a barge or anyway something floating on the water. The dabs on the right could be rocks sticking out of the water or whatever-- and so on. The whole composition gives the impression of a brilliant summer’s day at the seaside—underlining the impression of a happy exhibition to celebrate it.