A Play That Deals With Fame, Ambition and Aging 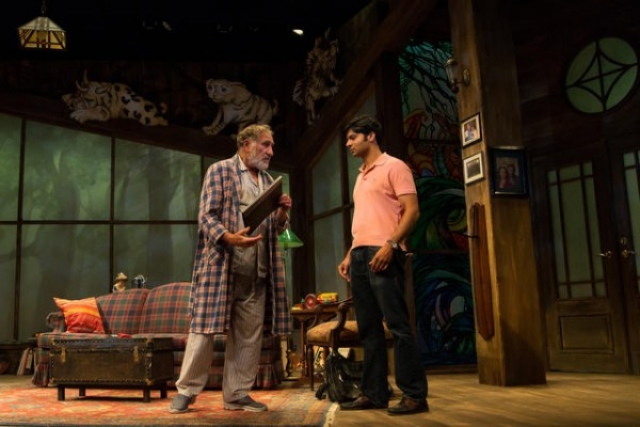 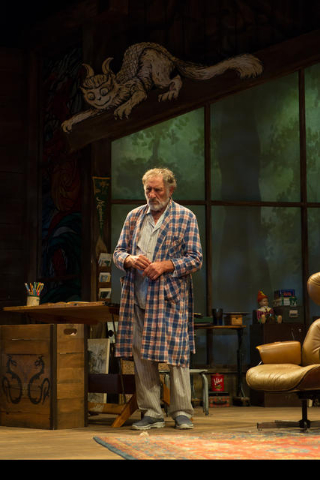 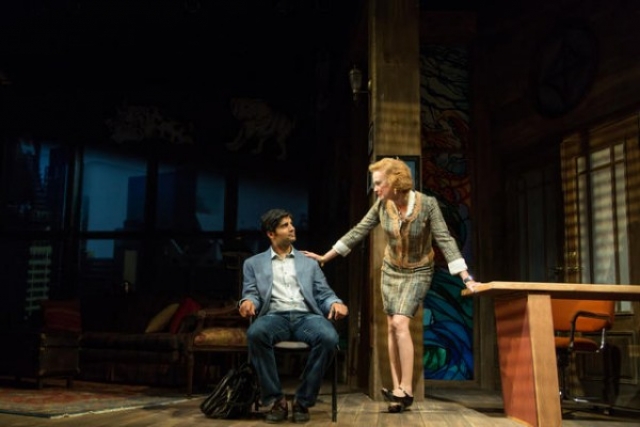 Shem Bitterman’s one act play, The Stone Witch, has been in the works for five years.  The story seems simple at first.  An ambitious unpublished children’s book writer, Peter, played by Rupak Ginn  is asked by a well-known editor, Clair Forloni, played by Kristin Griffith,  to go up to the cabin of his writing hero, Simon, played by Judd Hirsch, to help him write a new book after twelve years of suffering with a writing block.

What motivates Clair is ‘keeping up the brand’ and a new holiday book from a famous, still popular author.  She is played by Griffith with determination and focus.  Her motivations never wavers.

Peter, after being offered a sizable bonus should he succeed in getting Simon to write another book, reluctantly takes up the task.  He wants to meet his idol and brings along a book he has been working on for years, The Stone Witch.

What are his motivations?  Does he want a blessing on his book from his hero?  Is the money, enabling him to ditch his day job, most important?  Does he want to learn from the master?

Arriving at Simon’s studio, inventively designed by Yael Pardess, and enhanced by Projections Designer, Rasean Davonte Johnson, we see Simon’s accomplishments before we meet him.  Blow-ups of his creations abound, and many mementos surround his desk.

When Simon arrives, in PJs and robe, he is a mix of anger, confusion and resentment.

What is going on with Simon?  What has be been doing living here for twelve years, alone, without being able to produce another book?  We see Simon drinking,often, from many bottles stashed throughout the room.  Is he a drunk?

As Simon finally admits, he is lonely and wants Peter to stay.  They agree to work together.

When Simon hears about Peter’s project, and hears the title, The Stone Witch, he takes it over.  Ultimately, after a week together a book is completed.  A bond has been forged.  And an editor is very happy.

But, whose book is it?  Is Peter letting Simon be the author on his own creation?  Why?

And, when Peter erupts in anger, why doesn’t his editor understand?

As you can tell by the many questions above, this is not as simple a story as it first seems.  It raises more questions than answers.

Director Steve Zuckerman, in his eighth project with Shem Bitterman, elicits strong acting.  Judd Hirsch, at 81, is a marvel.  But his character’s development is unclear and unfinished.  Rupak Ginn, effectively plays a young, ambitious author, taking advantage of an opportunity to meet his inspiration.

Kristin Griffith effectively portrays Clair Forloni, an experienced editor and former lover of Simon’s, whose need for another best seller, pushes her to try this match making to reach her goal.

What is needed in this play is more in-depth character development so that the story moves more smoothly and with a bit more clarity.  While the author has stated that he likes the ambiguous elements of his play, he has some work to do to honor the talents of his cast, director and creative team.  And to honor his own simple story of a very talented man and how he handles fame as he ages.