The Orphan of Zhao at La Jolla Playhouse, 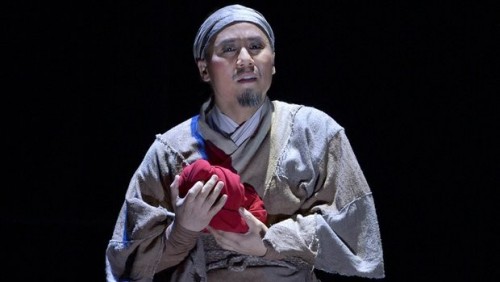 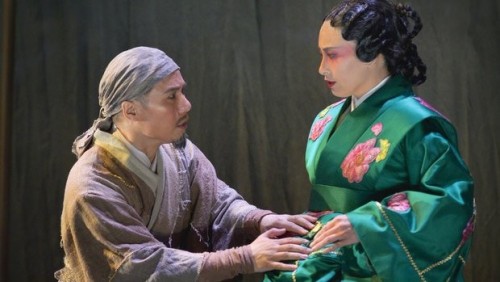 The Chinese tale dates to the 4th Cntury B.C. 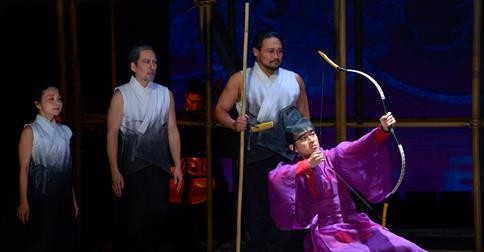 Some stories are timeless. The Chinese discovered the secret of telling good stories 2000 years before the Bard was born and both cultures are still thriving when it comes to telling and re-telling stories.

“The Orphan of Zhao”, at La Jolla Playhouse, is receiving an intelligent and intense revival of the classic Chinese legend that has roots in the fourth century BC. The production is sensitively and deftly directed by Carey Perloff, and boasts onstage musical accompaniment in the form of a sensuously played cello by Jessica Ivry, and a series of violin interludes, performed by cast member Philip Estrera, that lends a nice ancient Chinese theatre quality to the overall production.

The legend/story is as old as mankind itself. It’s an epic tale of self-sacrifice and revenge. In one of China’s many political coups over the centuries, a country doctor is forced to sacrifice his own son in order to save the last heir of a noble and massacred clan. Program notes allude to the story being Hamlet-like in its telling. It reminded me more of the Abraham/Isaac biblical passage: Genesis 22.5, where God orders Abraham to sacrifice his son as a way of testing his love and devotion.

Regardless of its origin, “Zhao” was the first Chinese play to be translated in the western world nearly 300 years ago and has inspired countless operas, plays, and movies. This production introduces a new adaptation from the pen of writer/author James Fenton.

One can only imagine the thoughts, fears, and decisions that must have gone racing through the corridors of the mind of country doctor Chen Ying, a retainer to the Royal family, when he is informed that he must sacrifice his own newborn son in order to save the Princess’ son.

Like all theatre, the dark side of human nature within its various cultures hold the most audience fascination when it comes to dramatic moments, and Chinese history is no exception. The play is replete with enough murders, suicides, and mayhem to satisfy even the darkest of hearts and “Zhao” definitely has its share.

Director Perloff is fortunate to have a talented and dedicated cast to deliver her vision of the ancient legend/story with style and clarity. The anchor of the company is the acclaimed stage, TV and movie actor BD Wong (who can forget his Tony winning performance in ‘M. Butterfly’). His poignant and insightful portrayal as Chen Ying is the glue that holds the rest of the company to his high professional standards. Stan Egi as Tu’an Gu; Orville Mendoza as Wei Jiang; Brian Rivera as Han Jue; Julyana Soelistyo as Chen Ying’s wife; and Sab Shimono as Gongsun Chujiu also standout in solid support.

The creative team led by director Carey Perloff – the Artistic Director of San Francisco’s acclaimed American Conservatory Theatre (ACT) for twenty years – features a dominating 30 foot high, “Jungle-Jim like” scaffolding set piece designed by Daniel Ostling that some of the actors must navigate during the performance. Lighting director Lap Chi Chu provides many mood enhancing shadows and shafts of light necessary to heighten the on-stage tension. I still remember how he successfully met the challenge of lighting an all glass- walled set at the Geffen’s “Death of the Author” production earlier this year. The costumes designed by Lind Cho are spot-on, and sound by Jake Rodriguez, with original music by Musical Director Byron Au Yong are first rate.

“The Orphan of Zhao” runs through August 3, 2014, at the Mandell Weiss Theatre.