The Merry Wives of Windsor at BU's Tsai 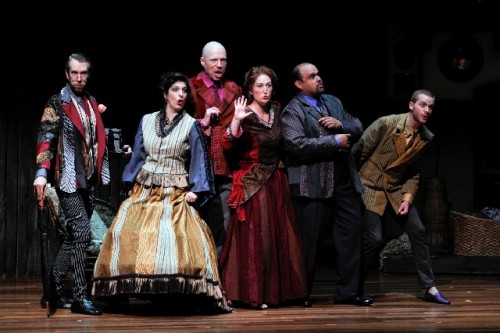 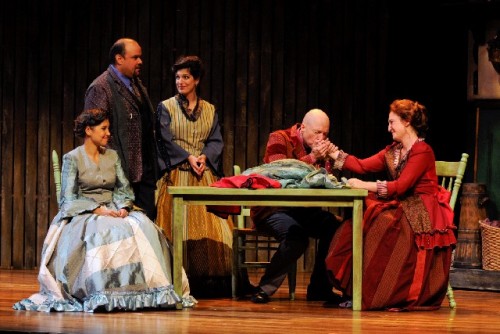 If the idea of a German comedy kept you away from Boston Midsummer Opera’s production of  “The Merry Wives of Windsor,” you missed a fun and musically satisfying evening. Its composer, Otto Nicolai (1810-1849), who died young like so many artistic geniuses of his time – think Keats, Bellini, Chopin - spent several of his formative years in Italy, and the effervescent comedies of Mozart and his Italian followers Gioacchino Rossini and Gaetano Donizetti were primary influences. The fact that he was among the first generation of German Romantics – the opera premiered in Berlin in 1849 - just makes his music more complex and interesting.

Today, Nicolai is best known for his lively “Merry Wives” overture, which was popular in the era of Pops concerts before they were given over to Vince Gil evenings and programs devoted to music by Hollywood hacks like John Williams. But the opera that followed those sprightly notes was seldom produced, at least in the United States. Midsummer Opera claims that this was the first professional production of the work staged in New England. Which is a shame: small regional companies could embrace “Merry Wives” without fear. So, much thanks to the folks at Midsummer Opera who gave many members of the audience - including me - our first experiences of the work.

The opera is filled with lively melodies that take a variety of forms: moving arias of young love and of revenge, three memorable duets -including a patter contest between Ford and Falstaff that could have been written by Donizetti - ensembles small and large and, yes, that overture, which deserved its erstwhile popularity. (But where does the saucy “can-can” rhythm that closes it come from?)

The story is familiar to both fans of Shakespeare and opera lovers who cherish “Falstaff,” Verdi’s great final work. Sir John Falstaff, a paunchy tavern rat, has sent identical love letters to two married women, Alice Ford and Meg Page, the merry wives of the title. They of course show each other the letters, reacting with a mixture of amusement and anger, and vow to get revenge on the old reprobate. Their plot involves Mistress Ford inviting Falstaff into her home to humiliate him, which her jealous husband mistakes as a real assignation. The women succeed - they have their servants throw him in the Thames along with the dirty laundry. There is a subplot featuring the Pages’ young daughter Anne, who is of marriageable age. Husband and wife each have a candidate for her mate, each preposterous in his own way, but rich. But Anne loves Fenton, a handsome young man of promise but no money, and she vows to marry for love not treasure. Both strains of the story are resolved in one of those moonlit scenes in the great outdoors common in opera – here Windsor Forest –in which the entire cast appears but remains unknown to each other thanks to the dark. To great and general mirth, Falstaff, surrounded by tormenting elves and fairies, receives his comeuppance, but is forgiven in the end by the generous-spirited wives.

Much of the success of the evening was due to the opera’s high production values. The story was set in the early 19th century, the time of the composer. Stage director Antonio Ocampo-Guzman kept the action moving cleanly and legibly. Stephen Dobay’s sets were simple but effective. The opera opened in Mistress Ford’s kitchen, which was dominated by an enormous hearth equipped with pots and pans. To the left was a wooden wall topped with a grisaille image of the town of Windsor’s distant skyline. The kitchen revolved out of view for the scene with Falstaff and his cronies in the Garter Inn, the scene in which Anne meets Fenton in the Pages’ garden and the forest scene, a large tree miraculously sprouting behind the wooden palisade. Elisabetta Polito’s beautiful costumes made the production luxe. The women wore the full skirts of the early 19th century and the men wore striped jackets of the sort British schoolboys wear. They were all in vibrant tones, each coordinated for the specific character. Karen Perlow’s lighting design was effective, especially in the forest scene, in which the individual characters were discernible even in the dark. The only Midsummer Opera production I’d previously attended was last summer’s “Don Pasquale,” which was more than adequate for a small company, with a few inspired touches. This season it seems that the budget was more generous, which clearly showed in the results.

Music director Susan Davenny Wyner conducted with passion balanced with precision, and her small orchestra of 21 players played with equal enthusiasm and skill. The opera was sung in John Moriarty’s witty English translation, which included topical references to the recent royal birth and that the marriage of Anne’s two suitors, Slender and Dr. Cajus – remember it happened in the dark – was perfectly legal in New England. There were no supertitles, but most of the singers made their texts audible.

The cast was well-balanced. In small roles as Anne’s suitors, Sean Lair as Slender and Stephen Humeston as Dr. Cajus, were fine, although they made a very odd couple. Bass-baritone Ricardo Lugo blustered well as Page; bass-baritone Dean Elzinga had more to do musically and dramatically as Ford, and his range was high and light for his vocal type. In his duet with Falstaff, their two voices blended very well, and they brought off the all-too-brief patter song with high spirits. Despite her insistence on choosing her own husband, Anne is little more than the standard operatic ingénue, but soprano Sara Heaton made the most of it, singing her big Act III aria sweetly and with feeling, hitting the high notes apparently without effort. Her duet with her lover Fenton flopped, however, the two singers showing little physical or vocal rapport. The fault was probably not hers. As Fenton, Alex Richardson had a lovely Italianate tenor voice, but as an actor, he was a stuffed shirt, showing little feeling or any ability to act. The two had more chemistry in the last scene when they entered via different aisles in the audience accompanied by a posse of elves and fairies.

As Meg Page, contralto Stephanie Kacoyanis had some rough patches, but she and Martha Guth as Alice Ford sang their Act I duet, in which they plot Falstaff’s downfall, with mutual sympathy, and their voices blended beautifully. The role of Alice Ford is more fully developed, and Guth sang it for the most part strongly and characterfully, although her voice was a little too metallic for my taste. Although the opera’s title suggests it is about the two wives Falstaff is trying to seduce, the character of Falstaff is so elemental that it steals the focus from them. As the debauched knight, bass Jason Budd was just about perfect. His low but loud voice was electrifying on his entry, and in Act II, his drinking song was infectious. Budd could act as well as he sang, and his cowering and trembling in the final act was affecting.

All in all, a pleasant way to spend a hot and rainy summer evening!

OPERA NEWS: Boston’s small but fragile opera culture, dominated by student productions mounted by the conservatories and concert or semi-staged productions by professional groups such as the Boston Symphony Orchestra and Boston Baroque, took a serious body blow in late 2011 when Opera Boston, one of two small professional companies that offered fully staged productions, abruptly closed. Now, according to Geoff Edgers in a July 19 piece in the Boston Globe, some of those involved with Opera Boston, primarily artistic director Gil Rose and major donor Randolph Fuller, are founding a new company to be called Odyssey Opera.

The new company will be launched in September with a concert version of Richard Wagner’s rarely produced early work “Rienzi.”

Some might say it is not auspicious for a company dedicated to presenting staged works to open with a concert, but the company plans on presenting three staged works, unnamed as of the moment, in the spring of 2014.

Opera Boston was known for presenting unusual or rarely done works. Odyssey Opera intends to follow down the same path. Rose told Edgers that he wants to make sure that Odyssey Opera will present works that haven’t played in Boston but are important pieces to be heard. Prospects for opera in Boston have suddenly gotten brighter, but considering the cast of characters behind Odyssey Opera – Fuller has a track record of withdrawing support from cultural organizations if he becomes dissatisfied - keep fingers crossed.