Escaped Alone and Here We Go by Caryl Churchill 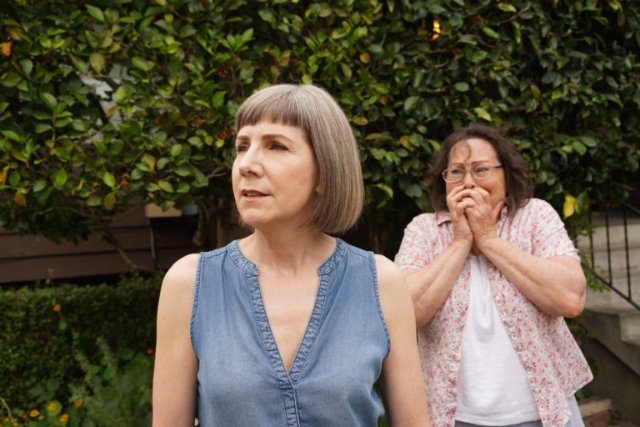 Anton’s Well’s Artistic Director Robert Estes scored a coup by securing the Bay Area premieres of two one-act plays – Escaped Alone and Here We Go – by Caryl Churchill, who some consider Britain’s finest living playwright (but it’s really Tom Stoppard). While they premiered independently in London several years ago, their felicitous linking on a single bill benefits both. Estes cleverly selected Thousand Oaks Baptist Church as a site-specific venue, and the choice could not be more apt. Escaped Alone depicts four women in their 70s chatting in a garden, and this play is staged in the garden courtyard of the church. Here We Go opens at the end of life – a funeral and is presented in the reception hall of the church.

In this modest setting, Escaped Alone reveals the duality of existence – the events in life that are particular to the individual and those that effect all of society. Three older English woman friends, still active and lively, often share tea and small talk that friends do in the garden of one of the friends. Beyond the self-referential chit chat of children and hobbies, the women also take occasional catty jabs at one another. But in shows of intimacy and trust, they also reveal their deepest personal fears – from depression (Lena) to cats (Sally) to kitchens (Vi). Oh, the rather odd fear of kitchens is only because Vi happened to kill her husband with a kitchen knife.

Into this coterie enters a fourth women, Mrs. Jarret. While she is known to the others, the fact that she is referred to formally indicates she lacks inner circle membership. What she brings to the conversation is a societal-level vision of a dystopian world to come, delivered in several monologues that disrupt the conversations of the others about their personal affairs. Churchill clearly takes a swipe at contemporary culture and politics when Mrs. Jarrett foretells a society in which the obese sell slices of themselves and people trade urine for mushrooms. Taking a tip from current trends, she foresees assets of the common good becoming monetized, as for instance, the wind being controlled by property developers (perhaps a Mr. Trump?)!

A highly inventive writer, Churchill’s narratives provide wide scope for interpretation. Given Mrs. Jarrett’s disconnects; the non-sequiturs in the women’s conversations; and the notion that they must be telling stories that they’ve told the others tens of times before, it’s difficult not to wonder if the action doesn’t actually take place in an asylum. Or maybe the playwright sees the whole world as an asylum.

The production is wonderfully crafted from the outdoor setting in natural light to James Goode’s thorough sound design. But any talky play relies first on good acting, and all four women are highly effective. Although each has her moments, perhaps the highlight comes from Jan Carty Marsh who gives a riveting soliloquy on why she hates cats and the fear that they can hide anywhere in spaces as small as a matchbox.

Here We Go explores the next stages of the life/death sequence, but non-linearly. Three scenes are presented in very different styles. Although each has merit as written and as produced, some viewers will be less than satisfied with the whole as a narrative statement. It should be noted that Churchill grants rare latitude to directors in defining characters and action. In this case, the common treatment of the second and third scenes is that the central character is the deceased male prescribed by the playwright from the first scene. Estes however found more poignancy in casting females in the latter two scenes. Looking at the results, the substitutions succeed in each scene independently, but results in a disrupted storyline in a play that already lacks cohesion. What would really tie this play together and link it better to the garden conversation play is if the deceased at the funeral were a woman.

The first scene is rather prosaic as mourners discuss the deceased, but its distinction is that one-by-one they break the fourth wall to announce when and how they will die. The second scene is a solo performance in which the character perceives that she (in this production) is dead and consigned to purgatory. She ruminates on whether she has reached the pearly gates; if she’s been cremated; about the various resting places from mythology; and more. Simone Bloch’s bravura performance, full of energy and ever-flowing graceful movement filling the stage, validates the femininity of the role. But Estes offers another welcomed surprise. He has cast four women in the role who split the performance dates, with each offering her own subjective interpretation. For those who appreciate the drama, this represents an opportunity to witness several different takes on the base material.

Scene three is performed in wordless mime. For twenty minutes, a caregiver washcloth-bathes an aged and impaired woman. The responsiveness of the listless patient to each touch and the emotionless routine of the figuratively invisible caretaker are impressive, but how long should we want to watch this and how does it add to the dramatic arc of the play? And chronologically, it would come before the funeral. Is Churchill being creative with the aberration of sequence for its own sake?

Previously, Anton’s Well has limited its productions to plays with no more than four actors. With this double bill, they extend to two plays with 17 actors and demonstrate that they are fully up to the task.