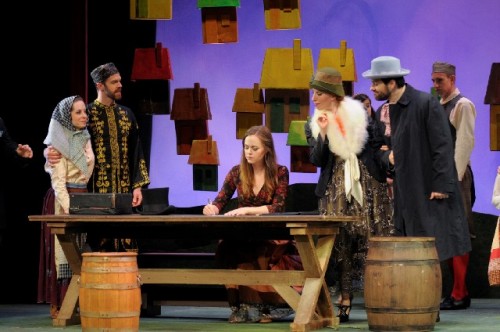 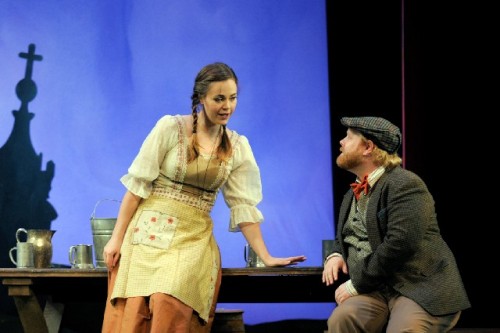 Marenka (Nicole Percifield) deceiving Vasek (Ethan Bremner) into believing that Marenka, whom he has never met, is a bad match for him.

Boston Midsummer Opera has come up with a winning formula: put on an operatic comedy, sung in English, during the summer when nearly all of the area’s cultural energies have moved to the country: the Berkshires; Newport, Rhode Island; Rockport; southern New Hampshire; and Cape Cod and the islands. (If I left anything out, my apologies!) Those left in the often-sweltering city are left relatively starved for cultural stimulus, so Midsummer Opera’s efforts are much appreciated, especially since it has had such a high success rate. I’ve attended the past three of its productions – Donizetti’s “Don Pasquale,” Otto Nicolai’s “The Merry Wives of Windsor” and now Smetana’s “The Bartered Bride,” and they’ve all succeeded where it counts: They’ve offered entertaining evenings of operas both familiar (“Don Pasquale”) and rare (“Merry Wives”) in charming productions performed by often delightful young singers. I already look forward to next summer’s show although there will be a lot of opera, some good, some bad, to experience in the coming 12 months.

“The Bartered Bride” was Smetana’s attempt to create a Czech national opera. Previously, like many of his generation, he was a fervent Wagnerian, and it took him several attempts to get it right. But he succeeded: it is the Czech national opera, and the only one of his eight works in the form to get produced regularly outside of Central Europe. But even then, it doesn’t get done all that often. It was my first time to see the work live, as I am sure it was the first time for most members of the audience. (However, my guest for the evening had seen it twice before – both times in Prague.)

The story is typical of comic opera whatever the language. (By the way, Midsummer Opera smartly used a new English translation by poet J.D. McClatchy that was witty and used so many rhymes that it made your head spin.) It opens with a pair of young lovers, Marenka and Jenik, who have to deal with the fact that her impecunious parents are planning to marry her off to the son of a wealthy landowner. That son Vasek turns out to be a socially inept stutterer whose inadequacies are made much fun of – something that would not be allowed in our politically correct time. But the blustering marriage broker Kecal browbeats Marenka’s parents Krusina and Ludmilla to sign the marriage contract without meeting the young man. Ludmilla, however, objects, saying that Marenka should be able to choose her own husband.

There are, needless to say, complications, otherwise there’d be no opera. Jenik seems to sell out Marenka for a stack of bills offered by Kecal, insisting that he will end their relationship with the stipulation that Marenka marry only the elder son of Tobias Micha, thought to be the hapless Vasek. Since Jenik’s origins are a mystery, you can see what’s going to happen a mile off. Marenka doesn’t, however, and is heartbroken, vowing never to marry. In the meantime, the circus comes to town, with a dancing bear, who is, of course, a man in a bear costume. When he gets drunk, Vasek takes his place, finding a place for himself at last as a circus performer with the exotic Esmeralda as a new girlfriend. In the end, Micha recognizes and acknowledges Jenik as his long-lost elder son, Jenik and Marenka reconcile, and the opera ends with general rejoicing, except for Hata, Tobias’s wife, who is resigned to her son running off with the circus.

High praise goes to the production team for making the evening so enjoyable. Midsummer Opera’s constant is music director and conductor Susan Davenny Wyner, who transformed a career as a soprano into a conductor after a hit-and-run accident left her unable to sing. She played the familiar overture with brio, bringing out the details of Smetana’s complex orchestration and foregrounding the peasant dance rhythms that structure the entire piece. (In a program note, Wyner wrote that although the opera sounds as if it is suffused with traditional folk melodies and dances, in fact there is only one actual folk dance in the second act. Smetana created all the others.)

Although his set for last year’s “Merry Wives” was cleverer – and his wit was evident in Odyssey Opera’s recent trio of Italian opera rarities - scenic designer Stephen Dobay created a serviceable set. An enlarged washy watercolor served as backdrop, suggesting both a cloud filled sky and mountains rising in the background of the Czech village depending how it was lighted. (Kudos to lighting designer John Cuff for helping to make those distinctions.) Arrays of brightly colored toy-like houses were stacked at stage right and suspended from stage left, suggesting the village that the small Tsai Performance Center stage couldn’t hold. A freestanding structure could be moved to serve as an arbor for the villagers celebrating the arrival of spring or as a room for the marriage broker to negotiate with Marenka’s parents.

Elisabetta Polito’s costumes were appropriate for the opera’s time and place, which meant for the most part standard order peasant garb. But she provided the marriage broker with a dark suit punctuated with patches suggesting his financial state, and when the wealthy Michas appeared in the final act, they wore the finery of the rural elite, Hata in a fur stole, stylish hat and purse and Tobias in a light blue fedora.

Stage director Antonio Ocampo-Guzman kept things moving smoothly, and he provided the relatively large cast with highly individualized behavior. This was not one of those productions in which the chorus doesn’t know what to do while they sing.

The only mis-shot, and it was a big one for an opera in which dance plays such a big part, was the choreography, which was performed by children. Okay, the stage was too small to accommodate both the chorus and a corps of dancers, which meant that compromises had to be made. The opening chorus, when the villagers welcome spring, is sung to polka rhythms and begs for dancers to fill the stage. Instead, there was no dancing at all, the villagers decorating the arbor with flowers instead. But the spirited polka at the end of the act was ineptly danced by children, some of whom looked to be no older than three. Polkas are an adult dance, so this decision was a-historical, undermining the entire production. Certain audience members oohed and aahed at the cuteness. I suggest they go to programs at the local dance academy if that’s what they like. Only in the third act, as circus performers, did the young dancers shine, ably performing splits and somersaults. The Central Mass Dance Academy seems to provide better training for acrobats than for dancers. As charming as they were, its performers should not have been used as dancers in the other acts.

The vocal cast was uniformly excellent, enacting their roles as well as singing them, delivering McClatchy’s rhymes as if they were natural speech patterns. (Of course, as opera singers they are expected to make Italian, German, French – and Czech – sound natural as well.)

Vocally, the evening belonged to the bartered bride herself, Nicole Percifield. Blessed with a beautiful lyric soprano that reached high notes without apparent effort as well as possessing a full, rich low register, Percifield was also able to act. Her dominant tone was sadness, first that her parents are willing to marry her off to someone for his wealth – “I can’t be sold like a horse,” she objects - and then by the fact that her true love is willing to dump her for cash. Her big third act aria was truly affecting, “Is that heart of yours so cold/That you would barter our love for gold,” summarizing the opera’s theme as her heart breaks.

As her lover Jenik, Eric Barry possessed a pleasing unforced light tenor that blended well with Percifield’s in their duets. And they exhibited real chemistry together as singers and actors. Tenor Ethan Bremner was a superb Vasek, comic and touching at the same time. In his entry aria, he makes clear his sadness that “everyone makes fun of me,” even as he stutters. As the marriage broker Kecal, bass Jason Budd, who memorably sang Falstaff in last season’s “Merry Wives of Windsor,” was in good voice and a master of comic timing as a stuffed shirt, although he had some trouble making the text clear.

In the smaller roles, all the singers were more than adequate, putting acting on an equal plane with singing. The chorus was also excellent, the male members of it visibly enjoying the obligatory drunken tavern song, which gave them the opportunity to harmonize like members of a college glee club. The reduced orchestra was mostly good, following Wyner’s direction with precision, although the strings were occasionally a little shrill.