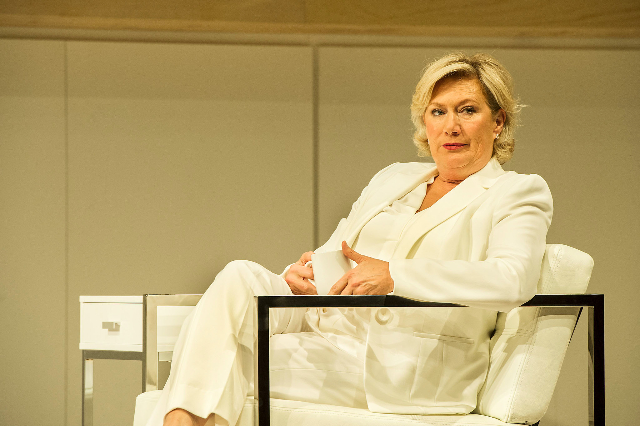 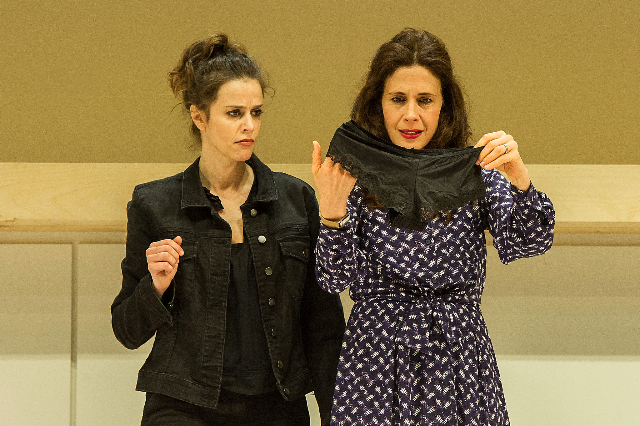 Matilda and Virginia discuss what shows up in the laundry basket. 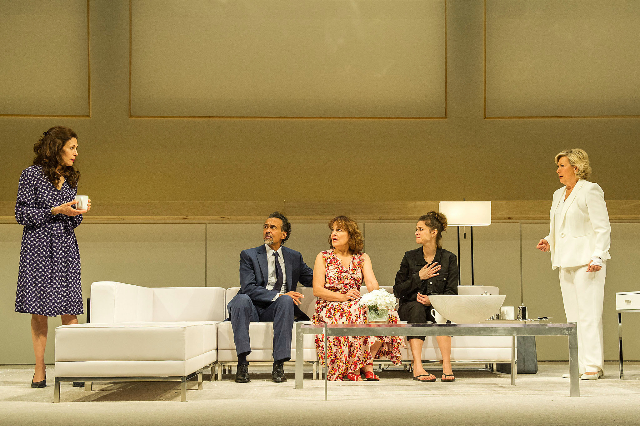 It all comes out in the wash.

A tragic comedy, The Clean House, by Sarah Ruhl premiered in 2004 and was a Pulitzer Prize finalist in 2005.

Arguably, it is a play by a woman, about women and essentially for women.

In presenting this play, the familiar premise of Williamstown Theatre Festival artistic director, Mandy Greenfield, is that sisterhood is powerful.

To make that point she has brought together a brilliant ensemble of women. The production is directed by Rebecca Taichman who won a Tony this year for her work with Indecent. There is the dream team pairing of the magnificent, two time Tony nominated, Jayne Atkinson, (Lane a physician) and in her 10th WTF role, Tony nominated (she was robbed) Jessica Hecht, as her sister Virginia.

The other women are the young and awesome Guenia Lemos as Matilde, a maid from Brazil who, curiously, would rather tell jokes in Portuguese than clean house. There is Priscilla Lopez (who originated the role of Diana Morales in A Chorus Line). She doubles as the ghost of Matilde’s mother who, literally died laughing, a plot point, and then in the second act plays Ana the mistress of Charles (Bernard White) Lane’s husband, a surgeon.

The first act was sublime and serene. Intermission came in a flash leaving us hungry for more.

As we have come to expect from WTF there were state of the art production values.

The modernist set by Riccardo Hernandez was a study in grey with Bauhaus inspired furniture including a white couch and Breuer/Mies like, ersatz Barcelona chairs. There was a recessed, large, rectangular niche in the rear with tall vases and vertical bare branches as accents and two smaller, abstract, matching sculptures.

There was a change in the second act when the rear wall lifted to reveal a stunning view of the ocean from Ana’s porch. With lighting by Ben Stanton that morphed into an Alaskan winter with Dr. Charles trudging through blizzards to find, fell, and bring home a rare yew tree. Its essence will be concocted into a brew to combat Ana’s terminal cancer. In an aside, with an understanding of its biochemistry, Lane affirms that it may help to curtail the growth of an aggressive cancer.

There were lots of strings in the sound design by Andre Pluess that marked transitions in the play and its at times confusing plot points. In the event that we miss them there are projected signifiers that serve as cliff notes for the twists and turns.

The costume designs of Anita Yavich spell out the characters in black and white with shades between. Dr. Lane is commanding in a stark, white power suit. Blending in with the white and gray set you get that she is phobic about keeping a clean house. In an off stage incident, she cuts herself opening a can of black olives. Her hand is then bandaged with a telltale spot of blood. This stain resonates and is reinforced as a metaphor for vulnerability, not just in her world, but that of women.

There is further talk of the curse when her sister Virginia makes a surreptitious pact to clean instead of the comical maid. While folding laundry they have a running commentary on his and her skivvies.

Holding up Lane’s white and generic panties Virginia muses on whether to clean or toss them when stained by blood. We told you this was a women’s play. That dialogue may not mean much to most guys who don’t poke about in the laundry. The response of Matilde is that she tosses them and just loves to buy lots and lots of sexy panties.

Oh my! Talk about too much information. It reminded me of seeing The Vagina Monologues when the only other guy in the audience, seated in front me, was on his honeymoon. I suggested that we skip out and go for a beer.

Sexy skimpies show up in the laundry basket. Clearly they are not Lane’s. It is implied that Charles has a mistress and they got there somehow. But when Ana, a married woman of a certain age, shows up in the second act they don’t seem to match her mode of dress. Who’s then? This is never quite explained.

As are a lot of loose ends in Ruhl’s play which seemed so perfect in the first act and unravels at warp speed in the second.

Initially, the sibling rivalry and repartee of Virginia and Lane is just delicious. It was a thrill to see two such remarkable talents going at each other. The Lane of Atkins, is blunt, arrogant and direct. She  is brilliant and successful. The house is a signifier of her status, authority and domain.

As she says out of frustration with the maid “I didn’t become a doctor to clean my house.”

The complex, understated, dithering, domestically inclined, Virginia, in yet another galvanic performance by Hecht, sees poetry and philosophy in dust. It gives her passion, clarity and a role in life. Dust, and its removal, is a deep, personal commitment. Everything about her  is neat, clean, and precise. Yavich has dressed her in floral, safe, housewife, suburban dresses. There was a change between acts but they looked the same.

What never ceases to amaze in her performances, how lucky we are to have her as a Berkshire neighbor, is what she builds into characters. More than delivering words there is the stutter step of delivery, pause, getting the full attention of the audience, then wham, punch lines that bring the house to its knees in laughter.

Compared to her career driven and super brilliant sister one assumes by her self effacing demeanor that she missed out on those genes. She is every bit as smart as Lane and often gets the touché in their sharp exchanges. In this play we were shocked to hear them screaming at each other. That must be tough on the voice night-after-night for the run of the play.

In lots of little ways we learn that Virginia is smart. In an exchange with Matilde, for example, there is a dialogue about her relative age with a comment on the condition of her skin. Pause, zinger, “Oh. You’re 27.” Hilarious.

Charles, in an awkward scene, brings his mistress home to meet his wife. He explains that he has been faithful to and loves Lane but he has met his beshert, or soul mate. Further be explains that by Talmudic law he is bound to join her and leave his wife.

Lane’s response is that he’s not Jewish. Enter Virginia who has been off stage. Hardly nonplussed she catches the drift and blurts out “Oh, your beshert.” As the audience howls the flummoxed Lane asks how in heck she knew that? Evoking another huge laugh, Virginia blithely says “Oh, I heard it on NPR.” Brilliant.

In another exchange with Lane she states that she has finally gotten as job as a checkout person at the super market. She likes the cash register, watching different colored fruit on the conveyor belt, and her fellow workers “don’t seem to mind that I went to Bryn Mawr.”

Matilde, a dark character and plot twister is dressed in black. As clear as black and white in old cowboy movies she’s the antagonist to Lane. Like Trump, at the tipping point, Lane bellows “You’re fired.”

But, not so fast. This possibly undocumented domestic has no place to go. Ana and Charles offer her a job. All that joke telling in Portuguese is not so easily dismissed as Lane learns to her dismay.

Then, alas folks, there is that second act when it all comes apart leading to that poetic and implausible death scene. Crank up the violins and yank out the hankies.

In dream/ memory sequences Matilde’s parents are dancing about having fun. She died laughing when he told her an incredible joke. Then he shot himself. How sad. But really? Talk about a wacko backstory. Good grief!

The next time they are seen, again an apparition, Lane tells Matilde that the shadows are in fact her husband and his new mistress Ana.

From dancing as dead parents we now see Dr. Charles with the new found love of his life stretched out on a gurney. During a consultation she demands that he remove the breast the very next day. In that moment he has fallen madly, passionately in love with her.

Does that make sense?

Not quite knowing what to do with Charles the playwright sends him packing to the Yukon.

For Ruhl, and perhaps many women in the audience, men are so inconvenient. Yeah, they are good for some things, but when it really counts they are as useful as tits on a bull. This is something that guys should ponder when not drinking beer and watching sports on TV.

Or trudging around the Yukon abandoning Ana on her death bed.

She hates hospitals, medicine and doctors.

With Charles sent packing we focus on the women and how they come together and work things out. They, and perhaps we, come to deeper understandings of love, sisterhood, compassion and mortality. This is women’s work at its finest and most exquisite.

Charles is last seen dragging about that dead yew tree. What a metaphor.

Actually it looked more like a swamp maple. Yew trees may be hard to find hereabouts. Perhaps Charles was Yewish after all.

As we say in journalism, and perhaps in theatre as well, don’t let the facts get in the way of your story.