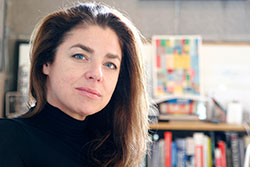 Sylvie Fortin is the new director of the Biennale de Montreal.

Chairman Cédric Bisson and the entire Board of the Biennale de Montréal are pleased to announce the selection of Sylvie Fortin as Executive and Artistic Director of La Biennale de Montréal – BNL MTL.
Fortin brings proven leadership and a unique combination of professional experience and artistic vision to the Biennale de Montréal. She will move to Montreal from Kingston, where she has been Curator of Contemporary Art at the Agnes Etherington Art Centre at Queen’s University since last January. As Editor-in-Chief (2004-2007) and Executive Director/Editor (2007-2012) of ART PAPERS, she led the organization from a regional publication to a global thought leader. She was Curator of the 5th Quebec City Biennale (2010), Curator of Contemporary Art at the Ottawa Art Gallery (Ottawa, 1996-2001), Program Coordinator at LA CHAMBRE BLANCHE (Quebec City, 1991-1994), and a long-term collaborator with OBORO (Montreal, 1994-2001). Her critical essays and reviews have been published in numerous catalogues, anthologies and periodicals.
Sylvie Fortin will assume her new duties on September 3, 2013. She will be responsible for the next edition of La Biennale de Montréal, which will take place at the Musée d’art contemporain de Montréal (MACM) and across satellite sites from October 9, 2014 to January 4, 2015. This edition of the BNL MTL— an invitation to revisit the future in  L’avenir – (looking forward)—will reflect the vision of the Biennale’s guest curators Peggy Gale and Gregory Burke, and MACM curators Lesley Johnstone and Mark Lanctôt. Fortin will also be responsible for the positioning and strategic development of future editions of the Biennale de Montréal.
The Biennale de Montréal is a fixture on the contemporary art landscape. Produced by a newly constituted independent organization, the event can now rely on the appropriate infrastructures to access expanded resources and produce compelling events that give greater visibility and currency to the practices of artists, while reaching out to an expanded and diverse public. The BNL MTL is, more than ever, in a position to contribute to contemporary art discourse, to provide a platform for the exploration of curatorial practices, and to increase public awareness of contemporary art.
This partnership with MACM, Canada's foremost institution dedicated solely to contemporary art, casts the next edition of La Biennale in a new light, raising its profile and providing a solid infrastructure for contemporary art research and production.
The Board of Directors of the Biennale de Montréal is thrilled to welcome Sylvie Fortin, whose solid management experience, extensive international network, proven media and publishing expertise and rigorous artistic vision will allow the organization to fulfil its mission and realize the full potential of its partnership with MACM. The Biennale de Montréal can now look to the future with confidence, as its artistic goals and national and international scope will stimulate artistic production and make Montreal a prime destination for contemporary art.
Back to Fine Arts Section Home