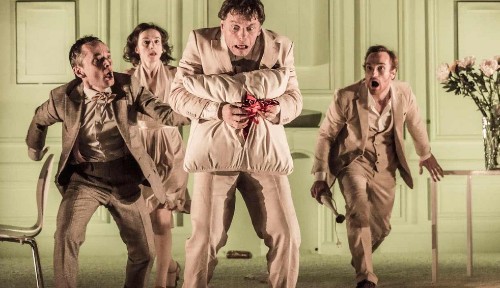 Ubu Roi, a terrific production by Cheek by Jowl. 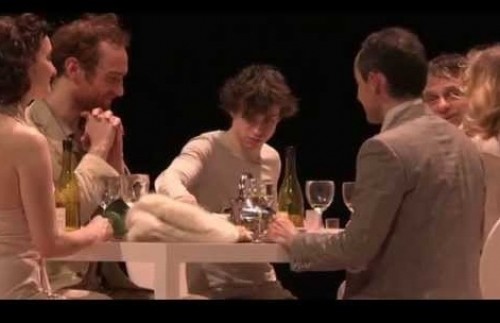 A dinner party. Neither Gurney, not Bunuel. 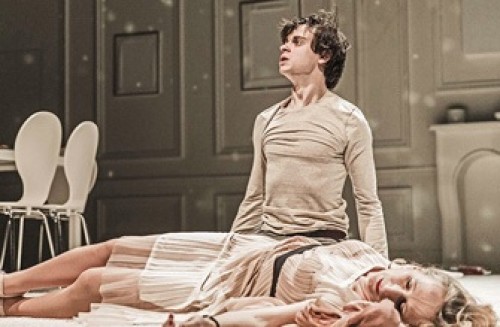 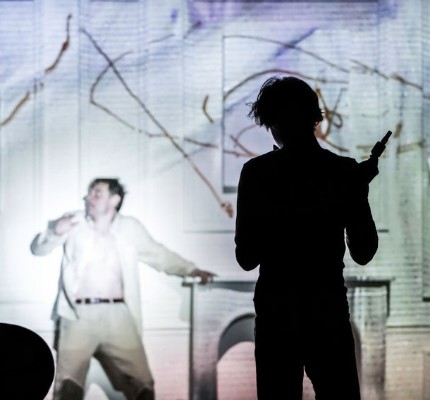 Christophe Grégoire, trapped at the end.

A couple are making last minute preparations for a dinner party.  They flutter about a contemporary living room/dining room.  When he gets the chance, the man gropes the woman, who is a turn on.

The doorbell rings.  Figures dance and freeze, as though they were part of a stroboscopic display: hands splayed, asses stuck out, legs akimbo.

Once the party gets started, the stage goes dark and the parallel play, Ubu Roi, begins. The famous first word, 'merde' or 'shit,' caused a riot at the play's premiere in Paris in 1896.  It does not seem tame today. Yet it is more an announcement of what is to come than a shock.  Farts have always been riotously funny.  Eating shit is usually a metaphor, but not for Père and Mère Ubu.  The party looks polite, but the back story, which is a now and future story too, is hardly civil.

Poland today is a country where 500 new theatres, concert halls and museums have just been built.  A recent President now heads up the European Union.  A hundred years ago, as Jarry wrote his play, Polish Kings had been toppled for centuries.  Père Ubu sets his sights on the Polish crown of another Good King Wenceslas and seizes it.  The Czar is in his sights and also Ukraine and Lithuania.

Snow is everywhere (projected) reminding us that both Napolean and Hitler were defeated by the Russian winter. Not Père Ubu as he dashes on driven by the desire for power and money.

This production of the play is being filmed as it takes place.  While the play within the dinner party is clearly marked, many film techniques are brought to bear on its successful presentation.

The video projections, sometimes extreme closeups of the characters' faces, at others, a suggestion of storms and landscape, enlarge the action.  The music composed by Davy Sladek combines Rossini, Louis Guglielmi, Wagner's Valkyries and others.  It is a potpourri, but always appropriate and enhancing.

The music is important because the action is choreographed.  Moving at times robotically, at others like skilled ballet dancers, the actors make visual statements of their inner thoughts and emotions in gesture.

Ubu Roi is a series of scenes.  In this take, they are woven together first and foremost by the dance of the actors.  Over the years, this effect has been achieved by costumes and animation.  Director Donnellan has taken advantage of live actors in contemporary dress.  He animates them by gesture in motion.

All of the actors are first rate.  Camille Cayol, who was trained in Russia, stands out as Mère Ubu.  Her husband describes her as a hag, but that hardly fits this slithering, electrifying actress who bends like a snake and whirls like a dervish.

The play is over a century old but as apt today as it was when it was first produced.  Power grabs, phyinancial chicanery, hidden assets, and murder are all being played out in Eastern Europe and Russia, and the rest of the world for that matter.

By setting the play at a contemporary dinner party where muffled conversations probably focus on the same subjects the play does, Cheek by Jowl reminds us, with great good humor, of how little has changed.