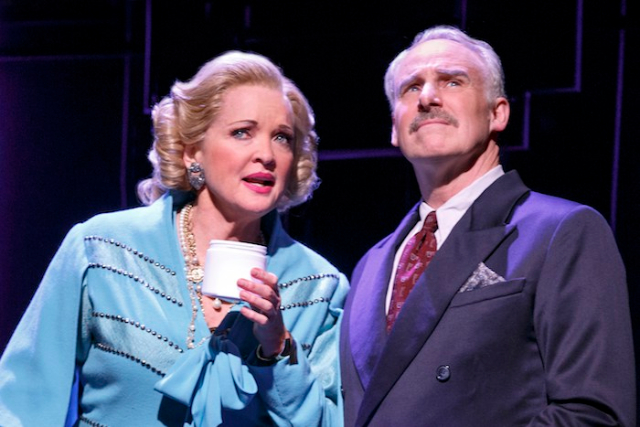 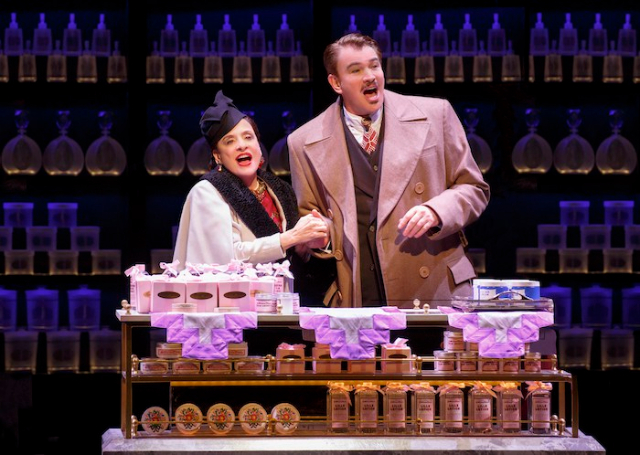 War Paint is Goodman Theatre’s latest production to show off its ability to design and stage a spectacle. Doug Wright’s book, Scott Frankel’s music and Michael Korie’s lyrics are overshadowed by the glamorous costuming by Catherine Zuber and elegant scene design by David Korins. Michael Greif’s direction and Christopher Gattelli’s choreography skillfully structure the pieces for a pleasant-enough theater evening.

It is the story of two cosmetic industry pioneers, women who achieved corporate success in an era when it was even more difficult to do so than it is today. But once you get past the competition between the Polish Jewish immigrant Helena Rubinstein (Patti LuPone) and the sunny blonde Elizabeth Arden (Christine Ebersole) known for her pink color palette, there’s not much story left. They were fierce competitors, specialized in anti-aging products; they stole each other’s secrets and created powerful brands. Ultimately, their businesses declined because of lower-priced cosmetics products targeted at younger women.

The plot bounces back and forth between the two women and their two companies, with a lot of she said/she said parallels. Even the examples of discrimination they suffered are balanced. Rubinstein is rejected in her effort to buy a New York apartment (she buys the building) while Arden is rejected by the women’s club she wants to join, because she makes her own money rather than being married to it.

Goodman makes an effort toward relevance by including playbill articles about the histories of the two cosmetics titans and of female entrepreneurship. And to be fair, the issue of women breaking the glass ceiling is explored. One of the key songs, performed by both characters, is “If I’d Been a Man,” in which they lament how much easier their business lives would have been had they been male entrepreneurs. But half an hour into the first act, the story is pretty much laid out and not much is added after that.

Unfortunately, the quality of the original music is not memorable (albeit performed by a lively pit orchestra conducted by Lawrence Yurman). War Paint’s songs are performed with great enthusiasm and talent, but they are unhummable and unmelodic. Not a song in the bunch will be an earworm.

Another problem was that many of the lyrics could not be clearly understood. I was wishing for supertitles as you have at the opera.

The performances by the much-hyped stars, LuPone and Ebersole, are excellent. They are truly pros and will be ticket bait when the show is taken to Broadway, as it surely will be. The two male featured actors also do an excellent job. John Dossett plays Tommy Lewis, Arden’s husband and marketing adviser, and Douglas Sills plays Harry Fleming, Rubinstein’s marketing genius. The two men are poached and end up working for their competitors.

War Paint has a story line and a glamour quotient that will draw audiences and it’s bound to be a success for Goodman, both now and later. The play is inspired by War Paint Lindy Woodhead's book and the documentary, The Powder and the Glory, by Ann Carol Grossman and Arnie Reisman.