The Nose at the Munich Opera

The Nose by Shostakovich A stunning production in Munich 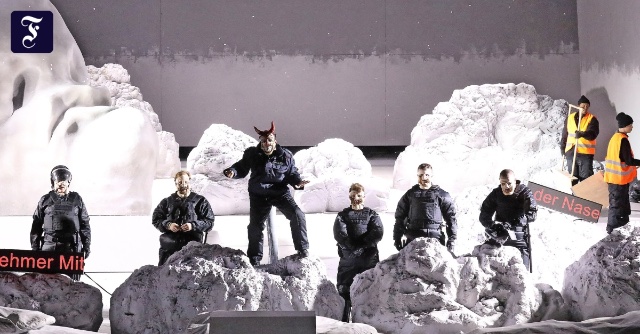 It is clearly cold in the Munich production of The Nose. 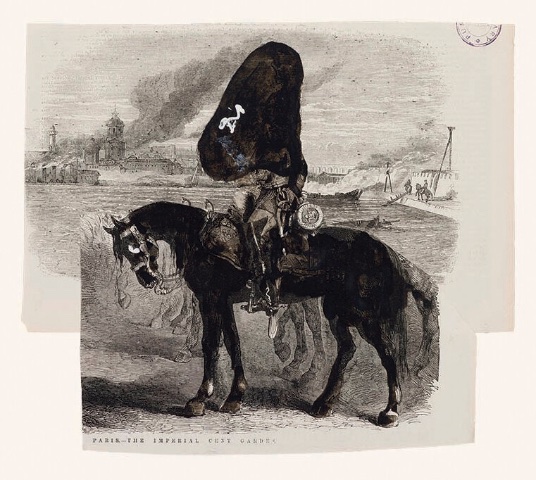 A nineteenth century illustration of the Nose appearing horseback. 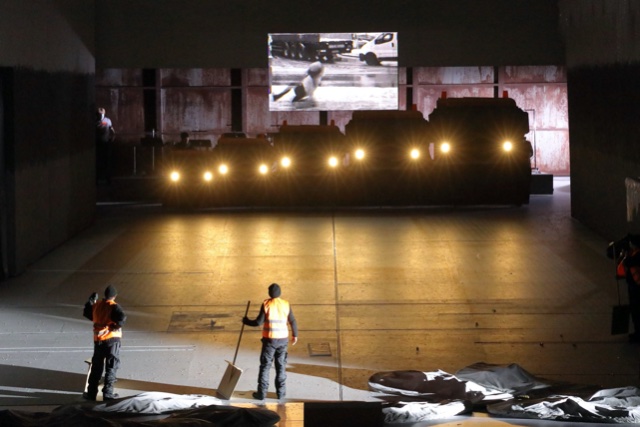 Videos inserted above the set of The Nose. Four trucks approach. Sharp beams of lights are used throughout the staging. 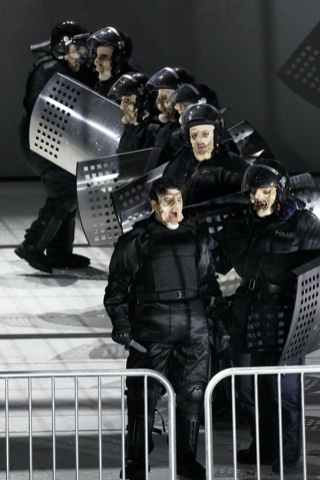 Silver shields and fences are ominous. 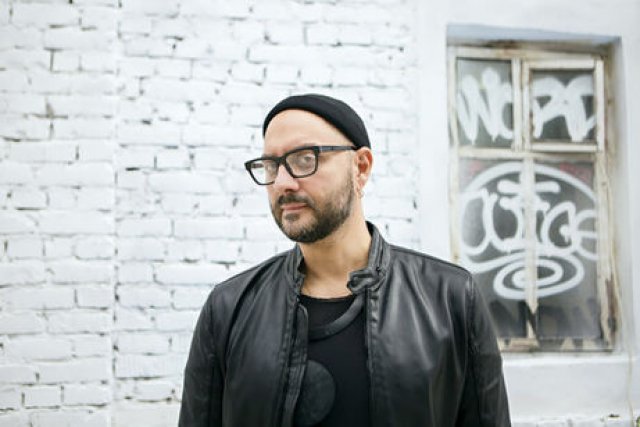 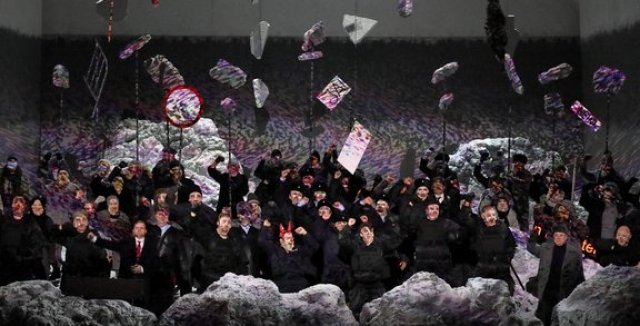 The Nose asks: where will this all end?

Dmitri Shostakovich’s Die Nase is brought to the stage of the Bayerische Staatsoper by Russian director Kirill Serebrennikov. The General Music Director Vladimir Jurowski conducts the Bayerisches Staatsorchester. The Soviet director is confined in Russia. He directs from his home there. He has not been able to come to Munich.

Serebrenkov notes about the preparations for this production: During the time of my house arrest, I was not allowed to use the Internet and could only communicate via video and audio recordings, which my lawyer brought to me and took away from me again. In comparison, the possibilities I have now via the Internet are downright luxurious. Incidentally, musical theater is better suited for this kind of remote direction because the score already exists as something fixed. It functions like a basic formula through which every physical action can be linked to the music. In drama, it's more difficult to direct from a distance.

Director Serebrenikov is a Gogol specialist and relishes the story on which Shostakovich based his opera.  He continues: The Nose is about a major identity problem. The Nose and Kafka's Metamorphosis have basically the same beginning. ‘When Gregor Samsa awoke one morning, he found himself transformed into a monstrous vermin,’  it says in Kafka. Gogol's beginning could be paraphrased: "When Kovalev awoke one morning, he found himself without a nose."

You have to imagine it: Everyone has a nose, and Kovalev has none. The nose stands for a main feature, with which society identifies people. A person who lacks such a feature loses his identity, charisma, aura.

Today, if someone changes his appearance or social image for certain reasons, he still exposes himself to the risk of being disgraced. Essentially, it's about shame. Those who are strange or different, are forced by society to feel shame.

The Nose is the music of a young man, a punk. It is music of the crazy and wild twenties. Shostakovich unleashes enormous masses of sound here, as if he wanted to give birth to a new world. Later, terror and fear changed the entire Russian society, it became violent out of itself, and Shostakovich had to expect his arrest every day. This gave his music a different dimension. But The Nose is from a time when everyone was still alive.

The set in Munich has a raked stage, thrustting the production at us. Occasionally a room in which the protagonist writes, and a prison cell, are rolled out. Yet we are mostly on St. Petersburg's streets, where a statue of The Nose riding a horse is rolled out. Dump trucks roll ominously onto the scene. Colors are black and white and red. Uniforms are black, the snow and icicles are white, and street cleaners vests and bits of fire are a bright red.

Gogol was deeply radical and reacted to systemic oppression in 19th century Russia. Did Shostakovich respond to this in his own time? When he composed The Nose he was still an innocent.

Short, fragmentary, and seemingly disconnected scenes are translated from Gogol's narrative prose. Shostakovich was  responding to the internal structure of Gogol’s story. In Gogol the serious and conventional tone of the narrative is contrasted with the absurd events unfolding. Shoshtakovich writes:  Despite the comic goings on on stage, the music is serious.  Kovalev’s rush through the St. Petersburg streets is suggested by the Gallop music between scene 3 and 4.

Incongruity between narrative story told straight and the absurdity of the details is Gogol's trick. Shoshtakovich plays with the absurdity in music. He claims that neither he nor Gogol wisecracks, and yet they both do.

An orchestral sneeze begins the opera. The colors and emotions of the music continue to unfold, the music director Jurowski and his orchestra taking up each one. The famous drum interlude is performed by the drummers in costume on the stage.

Eugeny Zamkatin, a noted Russian satirist who was the author of We, a dystopian novel that preceded Huxley’s Brave New World, probably worked on the libretto, particularly Scene 2.

Kovalev was sung magnetically at this performance by Vladimir Samsonov who took over the role in place of Boris Pinkhasovich, who was ill.

The evening was a moving delight. The spunky music carried us along as absurd postures and scenes unfolded on the stage. This was not a contemporary update, but rather reflected the composer's unique mix of narrative seriousness in the score and the absurdity of life as lived. Yet the audience seemed haunted by the director's own confinement in Russia today.