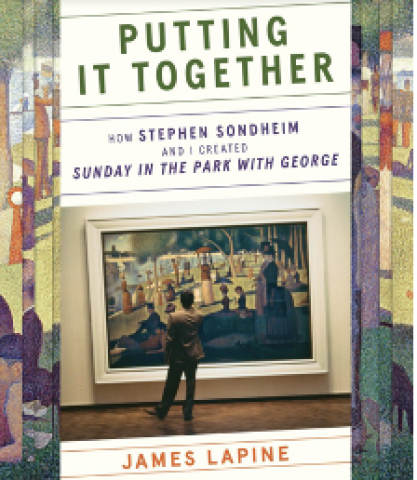 Two Broadway legends on Aug. 3 will discuss a new book and the Pulitzer Prize-winning musical that is the book’s subject.

Specifically, “an intimate digital conversation event” will feature Tony Award-winning playwright and director James Lapine, as well as legendary composer/lyricist Stephen Sondheim. The event’s purpose is to celebrate the release of Lapine’s new book. Its title is Putting It Together: How Stephen Sondheim and I Created Sunday in the Park With George. Sunday in the Park with George kicked off Lapine and Sondheim’s decades-long working relationship.

Award-winning actress Christine Baranski will moderate the digital conversation. She appeared in the original off-Broadway production of Sunday in the Park with George at Playwright’s Horizons.

Putting It Together‘s release will happen on the day of the conversation. It will begin at 7 p.m. EST on Aug. 3. .

Tickets are available at www.TheTownHall.org. Prices are as follows:

Strand Books Store (www.strandbooks.com) provided copies of Putting it Together.

Meanwhile, The Town Hall is a 1,500-seat nonprofit national historic landmark venue in the heart of New York City. Suffragists created it in 1921. Over the years, it has served as the home to countless musical cultural milestones.

“What better way to welcome theater back to New York than with this special evening,” Town Hall Artistic Director Melay Araya said. “Also, because of the virtual format, we are thrilled to be able to welcome viewers from around the world for this event.”

The year 1982 marked the start of Lapine’s career as a playwright and director. At the time, he met Sondheim. He was 19 years older than Lapine and already a legendary Broadway composer and lyricist. Shortly thereafter, the two decided to write a musical inspired by a Georges Seurat 19th-century painting. Its title is A Sunday on the Island of La Grande Jatte.

The book includes personal photographs, sketches, script notes, and sheet music. All help Lapine and Sondheim to “lift the curtain” on their musical, Sunday in the Park With George.

According to publicists, Putting It Together “is a deeply personal remembrance of (Lapine and Sondheim’s) collaboration and friendship, and the highs and lows of that journey.” It was “one that resulted in the beloved Pulitzer Prize-winning classic.”

Lapine is a preeminent director, playwright, screenwriter, and librettist. He won three Tony Award for “Best Book of a Musical (Passion, Falsettos, Into the Woods). In addition, Lapine received nine Tony Award nominations, five Drama Desk Awards, a Pulitzer Prize in Drama, a Peabody Award, and the Mr. Abbott Award for lifetime achievement in theater. Also, authorities in the field inducted him into the Theatre Hall of Fame.

Meanwhile, Sondheim is a composer, lyricist, and a Broadway icon. He won eight Tony Awards, including a Tony for Lifetime Achievement in the Theatre, a Pulitzer Prize in Drama, an Academy Award for Best Song, eight Grammy Awards, eight Drama Desk Awards, and many other honors. In 2015, President Barack Obama awarded him the Presidential Medal of Freedom.