The Pirates of Penzance at Barrington Stage 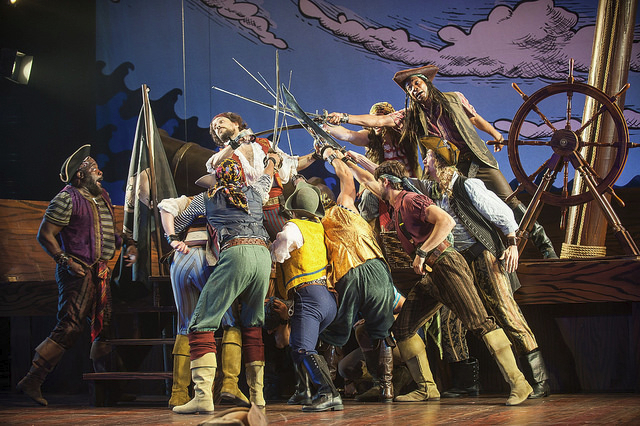 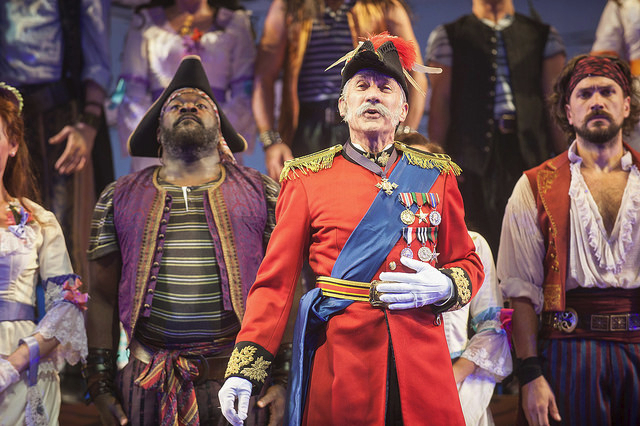 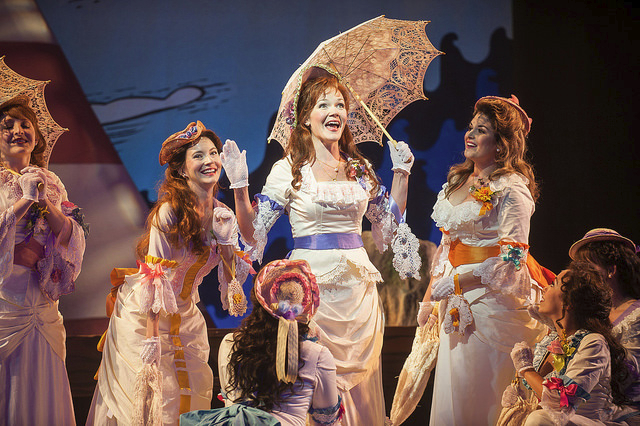 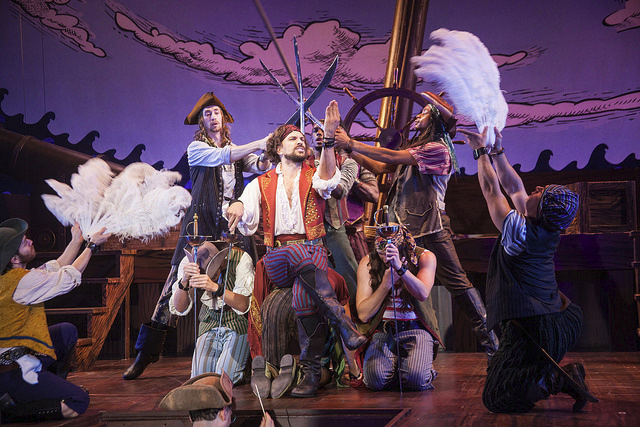 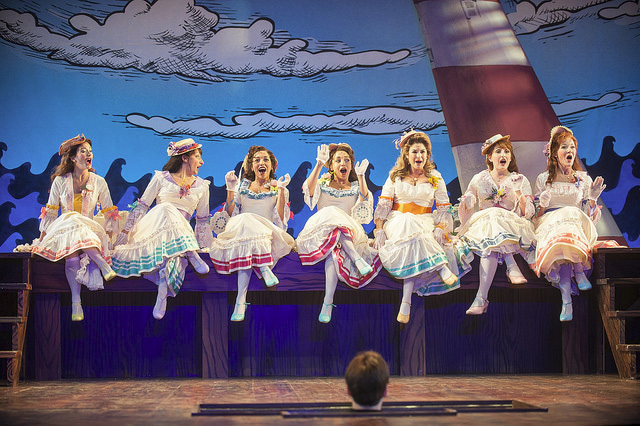 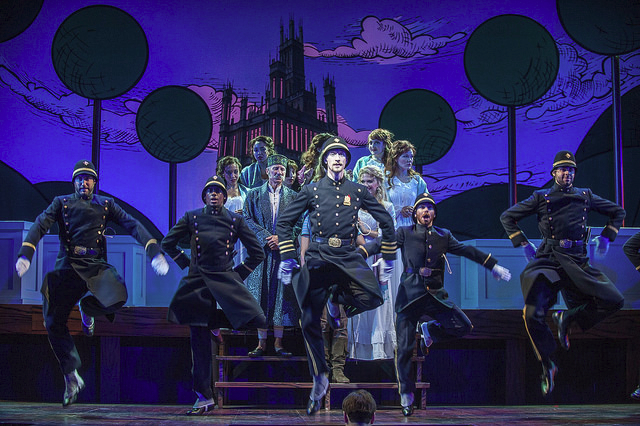 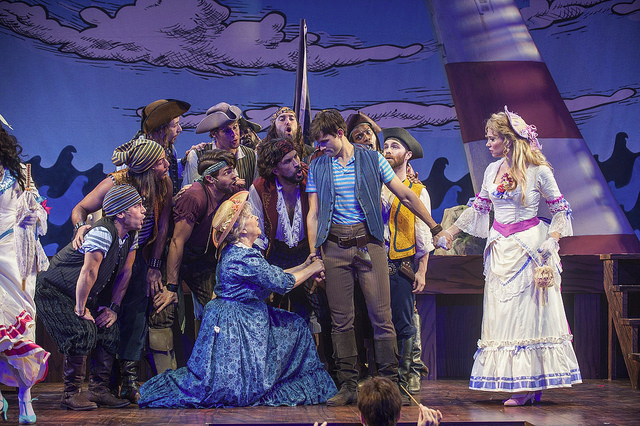 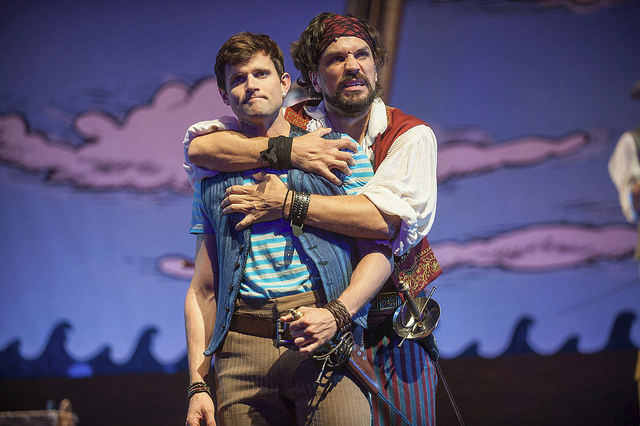 Aaargh. Avast me maties, button down the hatches. Swashbukcling pirates have invaded Pittsfield threatening man and beast with raucous, mayhem and utter fun.

This is an outrageously delightful version of Gilbert & Sullivan’s perennial musical feast Pirates of Penzance.

Yet again we have a Barrington production of the dream team of Tony winning director, John Rando, and his Tony nominated choreography partner, Joshua Bergasse.

They took their last Barrington collaboration to Broadway with a multiple nominated On the Town.

If we have Gilbert & Sullivan then Rando & Bergasse are yet another theatrical partnership joined at the ultra hip.

From the very first moment the theatre is awash with waves of energy crashing over, above and around the audience.

This chockablock production with its cast of millions is just too big not to bust out from the stage. There is a runway/ gangplank/ Jolson that extends from the stage and thrusts into the audience.

In the fairy tale set design by Beowolf Borritt initially the gangplank has a mast with rat lines and pirates scampering up to set sails with mischief as their destination.

In Rando’s direction the actors are also scampering, titubating and cavorting through the aisles. Sword swinging rogues slash by with risk of bodily harm.

Case in point, the conductor popping up from the pit had his arm lopped off with a swing of a cutlass. Somehow he managed to soldier on leading eight musicians through the rich score.

Sure it was all madcap fun and easy on the eye but, good heavens, the singing and dancing were just divine.

The cast was uniformly terrific delivering multiple orgasms for an aroused audience.

There was a lot of smashing of the fourth wall particularly interaction with the eight individuals, four and four, seated on opposite sides of the stage. Pirates, with ultimate charm and chutzpah got innocent maidens fondly to caress their scruffy cheeks.

With hilarious invention there was a moment when a throne was set on stage for Queen Victoria. Stepping out of character there was discussion about how the actress bowed out because of the miserable pay in the colonies. Then one was coaxed out of the audience. Playing along a trustee of the company, well known to the audience, was coronated as queen for a day. Or at least a few hilarious minutes.

As the Pirate King there was all the right swagger and duplicity in the performance of Will Swenson. It seems that his band of thieves and scoundrels were all orphans. That made him a comical soft touch when captives so plea. It seems that being a rogue doesn’t pay well if you have a conscience.

Rather late in the first act the musical got a booster rocket with the arrival of a very proper Major General (the wonderful David Garrison) who was the father of the bevy of beauties lusted after by the band of thieves.

His quick tongued rendering of “I Am the Very Model of a Modern Major-General” was just thrilling. For a gentleman of a certain age he was also remarkable in his fleet footwork. What an utter treat.

With a rigid, naïve sense of loyalty, commitment and honor it is difficult to get the right balance for the lead role of Frederic. That was  handled deftly with a adept performance by Kyle Dean Massey. He was less the dolt than is usual for the character.

His Mabel (Scarlett Strallen) be still dear heart, was angelic as his love interest. The score of Gilbert & Sullivan vacillates between opera and operetta. It is notched down enough for pop singers to play the roles but here Strallen had the range that made one think of grand opera particularly in mastering daunting passages of coloratura trills.

Often the songs of G&S zip by at such a blistering pace that we can't keep up with the lyrics. There was a burst of applause when Swenson just whipped through a rocket-fueled tongue twister. Wow!

There were other musical treats such as the rich resonance of Phillip Boykin in the cameo of Samuel. The comical role of Ruth (Jane Carr) the middle aged wench who is the former maid and would be bride of Frederick has a nice twist.

The approach of G&S is full of tricks, puns and reversals. They create fine messes and then deftly solve them. There is a riff about how Ruth apprenticed young Frederick to a pirate when she means to say pilot. Well, they sound alike.

Much is made that Frederick, turning 21 on the stroke of midnight, has served his contract with the pirates. Henceforth, as a man of impeccable honor, he pledged to hunt them down and enforce justice.

Just one moment the Pirate King interjects. It seems that Frederick was born during a leap year on February 29. By that logic he has had just five birthdays and will not turn 21 until 1940. One has to adjust to the time frame of the musical set in the Victorian era. So, until then, Frederic must remain a thief. He pleads with Mabel to wait for him. With maidenly innocence she responds that even for true love that's a heck of a long time.

While the singing is terrific, the dancing, oh my. Led by Alex Gibson, a tall drink of water with the nimble moves of a Ray Bolger or Tommy Tune, he deftly led a bunch of coppers through hilarious twists and turns. He also had an astonishingly comic vocal touch.

Mums the word on whether this superb production will move on. It is likely that Broadway isn’t ready for another production of Pirates. But this version in the Berkshires is just too brilliant and wildly entertaining to just pack up and put back on the shelf of memory.

Between now and August 13, while the  world around us goes stark raving mad, take a load off and escape for an evening of fantasy when the sun never set on the British Empire. Pre Brexit that is.