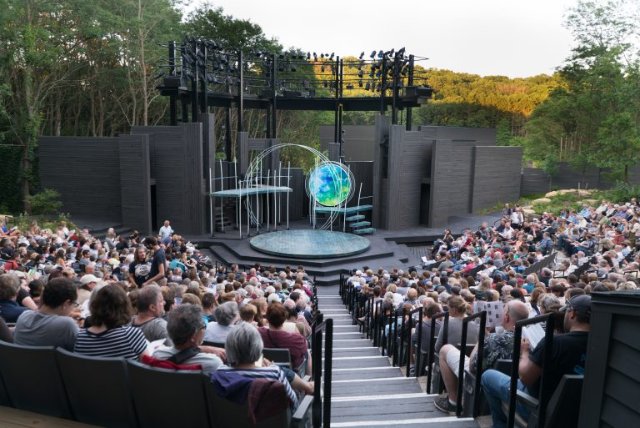 American Players Theatre (APT), a highly respected outdoor repertory company, hosted the American Theatre Critics Association (ATCA) to several top-flight theatrical performances and well-organized extracurricular activities during ATCA’s annual conference at Spring Green, Wisconsin, in July, 2018. Some residents of the coasts would be surprised at the rich cultural life in America’s heartland, but how could theater aficionados be unaware of this treasure of a company? APT is well worth a visit if you’re in the area – in bucolic southern Wisconsin, one hour from Madison, two from Milwaukee, three from Chicago, and four from Minneapolis.

APT is a “how do they do that?” organization. A few other major performing companies such as Oregon Shakes and Santa Fe Opera reside outside the gravity of large population centers, but APT has overcome far greater impediments than most. Two nearby attractions draw some visitors to the area – Frank Lloyd Wright’s iconic and functional Taliesin home/workshop/school and the rambling collector’s paradise, The House on the Rock – but little else does.

Relative to the number of productions it offers and seats it fills, APT operates on a meager budget of $7 million. Lacking the normal requisite of large population, wealthy individuals, and corporate businesses in the immediate locale, somehow they succeed largely on ticket sales. To make ends meet on the expense side, APT relies on dedicated artists and administrators willing to sacrifice to participate in a worthy mission.

Neither the Core Acting Company members nor the shorter contract players are likely to be known to the Bay Area, as they come largely from the renowned Chicago theater scene as well as Milwaukee, Madison and elsewhere in the Midwest. The draw for these artists may be the isolation and the opportunity to immerse themselves in multiple classic roles that focus on the beautiful language, stories and timeless themes along with other artists who value the same goals. Many of the loyal troupe have returned for 15 to 20 years. APT adopts an archival approach to productions and finds an audience that appreciates adherence to unaltered scripts.

Physically, Bay Area folks will find that American Players Theatre’s outdoor venue shares some commonality with Cal Shakes’ Bruns Amphitheater. But at 1,100 (comfortable – are you listening Cal Shakes? Marin Shakes?) seats, APT’s The Hill theater is much larger. Similarities include the fan shaped seating array facing a thrust stage, an adaptable, unfinished wooden backdrop, and beautiful hill and trees landscaping behind the stage. Because the stage of The Hill is at the same level as the ground behind it, and because much of the backdrop can be swung open to expose the wooded scenery behind it, the sense of infinite stage depth can be created with actors disappearing into the forest. In the case of the staging of 2018’s As You Like It, placing several trees on the stage and floodlighting the trees behind enhances that feeling.

The site of The Hill was chosen for its acoustics. Accordingly, actors perform in the old tradition, without mics, which gives a stronger sense of power and urgency to the performances. The often spare staging adds to the focus on the actors and the power of the words.

The Hill theater also provides two rather unusual and outstanding services. For women only, believe it or not, there is a proctor in the women’s restroom who directs patrons to stalls, resulting in uncommon speed and efficiency in moving the traffic along. Kudos! Probably the most unusual free concession found at any theater is that on the paths to The Hill, a number of wooden stands each contain about 20 cans of insect repellent that are well used and appreciated. Actors and audiences alike must endure Wisconsin’s summer mosquitos. Without the bug protection, the theater would sound like it was holding a slap dancing contest. Happily, neither mosquitos nor rain cancel performances.

The other APT venue, the Touchstone, is an indoor theater with a thrust stage and a more intimate 200 seats. Like The Hill, its technology meets current standards. The plays chosen are still classic in terms of universal themes with actors still immersed in communicating meaning through the writer’s words.

Playing this year at The Hill are Shakespeare’s As You Like It and Measure for Measure, Shaw’s Heartbreak House, George Farquhar’s The Recruiting Officer, and Garson Kanin’s Born Yesterday. The Touchstone hosts Athol Fugard’s Blood Knot, Ionesco’s Exit the King, Timberlake Wertenbaker’s Our Country’s Good, and John Morogiello’s Engaging Shaw.  For brief reviews of several of these plays, see our article “American Players Theatre – Commentaries on Productions.”

American Players Theatre is at 5950 Golf Course Road, Spring Green, Wisconsin. Its season runs from June into October each year.