A Flea in Her Ear by Georges Feydou 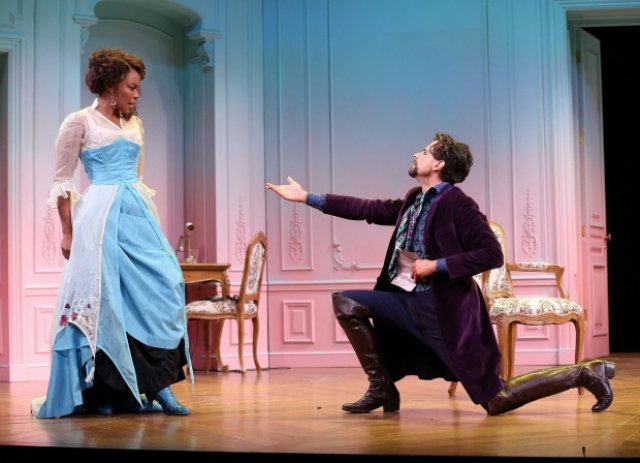 A Flea in Her Ear is a title that may have you scratching your head. What does it mean? The phrase has been around for centuries though it seems out of fashion in English today. It has had multiple meanings, but as used in the play, it is a French idiom meaning to put suspicion in your head. Playwright David Ives has written the adaptation of this Georges Feydou farce.

Mark Lamos has done a terrific job directing this farce with the help of a stellar cast. Now at Westport Country Playhouse through July 28, this co-production with the Resident Ensemble Company at the University of Delaware runs like a well-oiled machine. Certainly the fact that the play has already had a sold out run in Delaware earlier this year, means cast members have their timing down perfectly.

As in typical French farce fashion there are misunderstandings, sexual innuendo, doors which lead to near collisions and misidentifications.

The play is set in the late 1800s during what is called “La Belle Epoque.” It involves upper middle class people; infidelity or the appearance of it plays a major role.

Act one sets up the situation. Raymonde Chandebise is convinced her husband is having affair because that morning, she found a pair of suspenders returned to him from the Frisky Puss Hotel. She and her friend, Lucienne plot a way to find out for sure: Lucienne will write an anonymous love letter to him, setting up a rendezvous that afternoon at the hotel. But all is not as it seems; Camille, the nephew of Chandebise, is having an affair with the cook, Antoinette, at the urging of M. Chandebise’s doctor Dr. Finache. He also has a speech defect that means he can only say vowels – no consonants. Most have difficulty understanding him.

As M. Chandebise reads the letter, he is delighted that someone finds him attractive but he is sure the writer is mistaken, it must be his handsome friend, Romain who is the object of affection, so he tells Romain to keep the appointment. Then, Lucienne’s jealous husband, Don Carlos arrives; when M. Chandebise shares the letter, Don Carlos recognizes his wife’s handwriting and draws all the wrong conclusion.

We move to the hotel in Act 2 where the proprietor (a former Army man) abuses his new bellman (Poche) who was a soldier under him. Poche is the spitting image of M. Chandebise leading to multiple complications. Of course, all the characters show up at the hotel: Camille for his rendezvous with Annette; Raymonde to catch her husband; Romain to meet his adorer; Dr. Finache for his usual tryst. Of course, M. Chandebise also turns up (and is mistaken for Poche as Poche has been mistaken for him by almost everyone) to warn Romain that Don Carlos is coming to kill him. Even the butler arrives and discovers his wife there.

But as in most farces, no real sexual activity takes place. A mix up in the rooms occur so innocent strangers are caught up in the confusion, with lots of doors opening and closing, near misses and mistaken identities.

The play concludes in Act 3 in M. Chandebise’s apartment where all gets straightened out and the spouses forgive each other. Everyone is happy.

To carry this off requires absolute precision, speed and almost choreography so that the characters enter, leave, reenter, react with split-second timing. These performers carry it off perfectly.

You wonder how Lee E. Ernst who plays both M. Chandebise and Poche, can change costumes so quickly and reenter the set as the other almost simultaneously with the other leaving it. He also manages to change his total look, voice and attitude.

The entire ensemble captures the French flair. It is hard to single performers out because you could praise each and every one. But Elizabeth Heflin as Raymonde and Antoinette Robinson as Lucienne are both delightful. Michael Gotch is hilarious as the jealous Don Carlos as is Mic Matarrese as Camille. Robert Adelman Hancock makes the most of the small role of Rugby, a rather dense Englishman who is at the hotel awaiting a visitor.

All elements of the show are excellent: the scenic design by Kristen Robinson, costumes by Sara Jean Tosetti, lighting by Matthew Richards and sound by Fitz Patton.

But in the end it was director Mark Lamos who made it all work so well.

A Flea in Her Ear is at Westport Country Playhouse through July 28. For tickets visit Westport Playhouse or call 888-927-7529.