Performed at Tanglewood on July 26 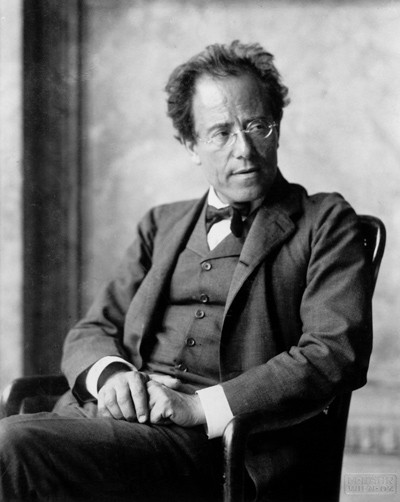 Every so often, I will focus on a composer, allowing for my personal, thumbnail profile of a unique creator. I’ll present a sketch of the composer and his musical and philosophical legacy. This week, it’s Gustav Mahler (1860-1911).

The impetus is the Saturday, July 26th performance at Tanglewood (8:30 p.m. in the Shed) of Mahler’s Symphony No. 2 (“Resurrection”) by the Boston Symphony, Tanglewood Festival Chorus and vocal soloists Camilla Tilling, soprano and Sarah Connolly, mezzo-soprano, under the direction of conductor Manfred Honeck.

This is not a program note, but my “take” on Mahler’s music in toto and what I feel it represents extramusically – the backstory behind the composer’s aesthetic, if you will. The Symphony No. 2 is, to my way of thinking, the most iconic of all Mahler’s works, since everything he subsequently composed stems from this landmark hybrid of symphony, solo
song and choral work. The Symphony is, as well, infused with Mahler’s conception of life and death that are representative of late 19th century German philosophical thinking.

If you’ve sinned and desire mercy; if you’ve been remiss about going to church or synagogue; if you are mired in the world and are beset by dizzying, pointless activity - there is forgiveness, understanding and release: listen to Mahler. The composer, building upon the spiritual sustenance that Bach and Beethoven offer us, provides, if not actual redemption, at least a metaphorical musical answer to our need for sympathy and absolution. The benediction to “go thou and sin no more” seems implicit at the conclusion of each of Mahler’s exhaustive symphonies.

In the Symphony No. 2 (“Resurrection”), composed 1888-1894, Mahler the sonic architect has constructed a cathedral of sound that tells the story of a life – our lives – as he spreads before us his five-part panoply of human existence. The final movement, lasting nearly 40 minutes, and with the entrance of the huge chorus, is a symphony within a symphony. Taken together, this 90-minute masterpiece moves us, transports us, and teaches us.

Mahler the great tone-poet depicts grand imaginative vistas, each blazingly pictorial, as if painted by Altdorfer or woodcut by Durer, stunning in their detail: scenes of our lives, from birth to death and beyond; to armed conflict waged by the forces of good against evil fought on some vast, otherworldly battlefield, accompanied by distant trumpet fanfares. Visions of both paradise and hell combine to – as Mahler himself said – “express the world.” The composer’s goal is even more ambitious: to depict the landscape of the human soul, from child-like innocence to grandiose conceits of great daring. In listening to the music of Gustav Mahler we are challenged to unchain the fetters of our earthly existence.

If salvation through music appeals to you, then Mahler becomes all things: man, artist, seer, confessor and redeemer. I do not write these words lightly or with ironic intent. Other than Mahler, perhaps only Bach and Beethoven possessed the genius to exalt listeners to such heights or to plunge them to such depths, showing us the fullness of creation.

Every work of Mahler – his nine symphonies, “The Song of the Earth,” the song cycles, and the uncompleted Tenth Symphony is a paean to life – its joys and sorrows, but always with an awareness that it is brief and that death awaits. The “Resurrection” Symphony, completed in 1894, paints a glorious picture of redemption, concluding triumphantly. With the close of his Ninth Symphony, composed in 1908/1909, the dream has faded, as the final movement slides into entropy; a peaceful resignation, perhaps, but with a disturbing sense of nothingness.

What happened, in those 15 years? Was it discouragement and loss of faith? Yes, and much more.

No composer was more tragically obsessed and conflicted: feelings of elation vs. despair, naive faith vs. complex reason, and the simple joys of country life vs. urban chaos. The death of his daughter Maria of scarlet fever and diphtheria in 1907, Mahler’s own incurable heart condition diagnosed at the same time, the eventual collapse of his marriage to the repressed Alma and his struggles with the Vienna State Opera left Mahler world-weary. He died in 1911, aged 51, of a bacterial heart infection.

Knowing this, one completely understands why Mahler believed in fate. The funeral marches in symphonies 2, 5, 6, 7, and the “Kindertotenlieder” reveal a man obsessed with death. Yet the various farewells to the world found in such works as the Ninth Symphony and “The Song of the Earth” are full of consummate, undying beauty.

Mahler’s eclecticism confused many listeners, and still does. Debussy walked out of a performance of the “Resurrection” Symphony, complaining that the second movement “sounded like Schubert.” I agree; it does. Listen to Mahler and you’ll also perceive references to Haydn, Beethoven, Wagner, Liszt, Brahms and Richard Strauss. My reaction? It’s pure Mahler: gathered together, re-imagined and transformed. Mahler, in today’s parlance, was the first ‘postmodern’ composer. It’s impossible to imagine Alban Berg, Benjamin Britten, Dmitry Shostakovich, Luciano Berio and Alfred Schnittke’s “poly-stylism” without Mahler’s influence. He depicted the world as he perceived it, and bountifully bequeathed his music to future generations, who today respond rapturously to the vision and integrity that lies within.