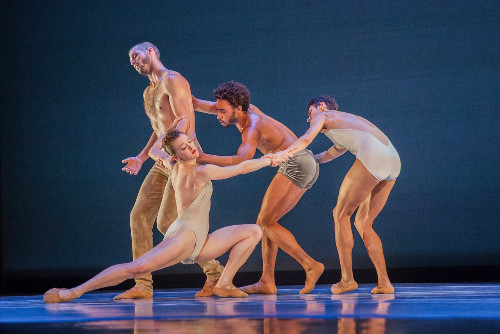 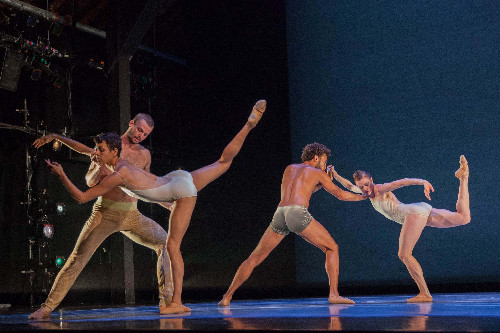 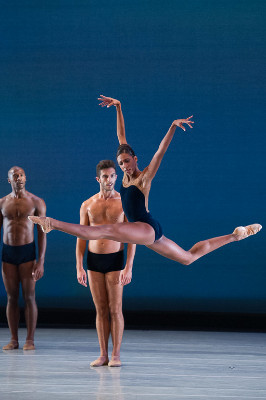 The premise of dances created by Alonzo King is to respect the traditions and training of classical ballet but to push beyond the etiquette and gender roles of dance that were spawned during the French court of Louis XIV, AKA, The Sun King and then emulated in the Russian court which adapted the language and manners of all things French.

It would be a stretch to say that King has created an American Ballet but it is certainly not French or Russian. While retaining the use of classical music and discipline we see a very different vocabulary of movement on stage.

In that regard we may consider the company and its unique style as evolved from the neo classicism of Ballanchine into a post modern deconstruction of dance that precede it.

By not abandoning its base in courtly traditions but transforming from within there is a creative tension that results.

In the first of three pieces of the program we hear the iconic music of Bach’s Concerto for Two Violins. That evokes a neo-platonic, Pavlovian instinctual expectation and response. The bell rings but we are not rewarded with the excepted food or traditional treat.

The use of classical music evokes a set of deeply rooted expectations for those who have spent decades viewing traditional, romantic choreography. The context of what dance signifies evokes associations of gender roles that in our gay and post feminist era no longer hold.

In the dance that we observe while listening to Bach the men and women are identifiable by their bodies and costumes but not by distinctive roles and movements. There is multi-valent partnering as our attention is diverted all over the stage both at individuals and their spectacularly unique dance as well as ensemble work.

To some extent the costume designs of Rosenwasser, with variations of color, as well as briefs, leotards, and pants, help us to differentiate both individuals, as well as sub sets or groups. There is a pattern of taking turns as an individual or group is featured while others leave the stage. Later to return through a series of substitutions.

Initially, all of the men are wearing black shorts while another is attired in a cream colored pair of shorts. That indicates to us that Olatunji is the soloist. So our attention diverts to him and is amply rewarded by contemplating a superbly trained and finely sculpted body.

He will later return with a costume change and merge into the ensemble.

There is much to learn and absorb so the impact of the dance entails a quick study. There is an intuition to know and understand the signifiers of what we are viewing. In what manner is this classical, Bach, and simultaneously post modern? How does that equate to the vocabulary of movement we experience?

The conundrum is that the dance is both familiar, Bach, and not. We sense a linearity as the dancers evoke a lot of horizontal movement. We come to sense and absorb why the company has the word LINES in its title. There are also inflections of speed and tempo that define the three movements. A quick segment is incepted when a female dancer reaches up and her downward thrust launches a staccato visual energy.

The Men’s Quintet is set to contemporary music which is a confluence of classical instrumentation by Edgar Meyer, we hear strings, and then embedded into that texture is the blues inflected saxophone of jazz master Pharoah Sanders. The blend of classical and jazz elements reflects a paradigm for King and his company.

The dance features the remarkable Michael Montgomery who we couldn’t take our eyes off of during the evening. All of the men were superb, especially Babatunji and Jeffrey Van Sciver who had particularly engaging circular movements and endearing gestures to the audience.

In the Men’s Quintet the dancers squatted, then popped up, forming a line with a hand on the shoulder of the man in front of them. The four then retreated to the back of the stage while Montgomery soloed. That ended with a spectacular leap and grab into the arms of the quartet.

The closing piece Biophony, having its East Coast premiere, proved to be uniquely challenging. The eight segments- Consilience, Tempestas, Mare Nostrum, Winds Across the Tundra, Still Life at the Equator, Frog Who Desired Moonlight, The Gift of Bees, and Nunaviq- were set to the sounds of nature recorded all over the world by Dr. Bernie Krause with connecting music by Richard Blackford.

While not cartoonish and literal, this is no The Lion King, the dancers were inspired by a wide range of sounds from insects and bees to the roar of jungle predators, or the plaintive organ like pipes of a variety of whales. There were some costume changes to evoke these sounds of nature. Montgomery, for example, appeared with a gossamer dress over his male attire. This was later repeated by other dancers.

Overall, this was a remarkably even and deeply talented company. Special mention must be made of the most spectacular of the women, Courtney Henry. This very tall and long-limbed dancer was riveting in her solos and often nicely paired with the superb Adji Cissoko.

This company left us with reflections on how to conflate a useable but superannuated past, yet selectively to focus on what may be salvaged, and then equate that into a statement that is relevant today. In that manner the past informs the present.

As Chuck Berry put it “Roll over Beethoven and tell Tchaikovsky the news.”