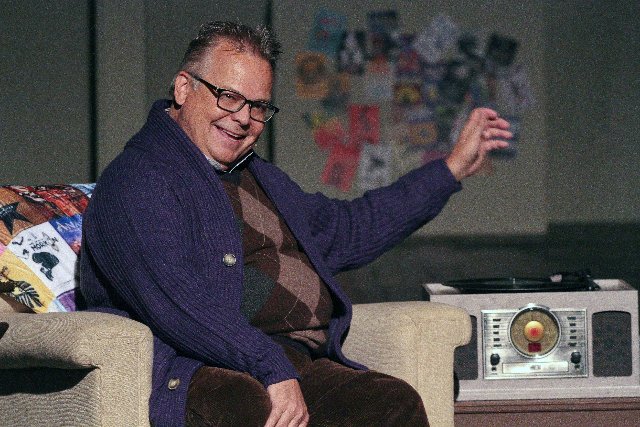 Tim Setzer as Man in Chair. Photo by Eric Chazankin.

In the lonely solitude of one’s own living room, the imagination can take flights of fancy.  The “Man in Chair” is a Broadway musical devotee who places the soundtrack album of his favorite musical on the turntable.  To his amazement, not only does the music and dialogue from a musical that he’s heard but never seen come through the hi-fi, but the musical’s action takes place right there behind him in his drab apartment!  This is the conceit of “The Drowsy Chaperone,” a fictitious musical from 1928.  Sonoma Arts Live takes on this frothy concoction and delivers a production that bubbles with delight from curtain’s (figurative) rise to fall.

The opening premise of the fiction is that Janet van de Graaf and Robert Martin, played by the charming and talented pair of Maeve Smith and Stephen Kanaski, are to be married on the day that the musical takes place.  The reality of the show’s evolution is that “The Drowsy Chaperone” began as a spoof of old musicals that was performed at a stag party for a real engaged couple with the same names as the characters in the show.  Got that?

Several hilariously delivered plot turns drive the action.  Janet’s drunken chaperone, played with great panache by the redoubtable Daniela Innocenti Beem, is charged with ensuring that the groom doesn’t see the bride before the ceremony.  While Robert doesn’t see Janet, he does kiss her, not knowing it’s her, and that becomes the basis for the bride wanting to call off the wedding.  While this causes some consternation, that’s fine with two gangsters acting as chefs, as they are charged with finding a way to stop the wedding.  It seems that their boss is an investor in a show that stars Janet, and it would probably flop without her.  Meanwhile, unlikely couples instantly fall in love, so that there may be more than one replacement wedding that day.

As is probably already apparent, this send-up is rife with tropes from musicals.  Songs with ridiculous lyrics and dance numbers appear for no real narrative reason, but they do entertain and showcase talent.  Beem belts out in Ethel Merman fashion, and Smith shows tremendous soprano range, hitting the high notes.  Kanaski and Jonathen Blue, who plays George, the anxious best man, show fancy feet and flair with an entertaining tap dance number.  Other stock characters abound as well, including a licentious Broadway producer and his untalented but otherwise appealing chorine girlfriend; a haughty matron and her very proper butler; and a narcissistic Latin lover.

The play-within-a-play is an ensemble piece with many performers getting to show their stuff, and the few rough edges in performance, which there are, can be permitted.  The one character that must be spot-on is the unnamed Man in Chair who narrates and communes with the audience.  The actor portraying this role is a fail-safe choice, Tim Setzer, who is phenomenal.

Setzer totally inhabits the character as he lounges in his easy chair wearing house clothes with clunky slippers.  His one passion is his love for musicals, and he is knowledgeable about many aspects of them.  His apartment is chock-a-block with related albums and books.  A sluggish and reclusive type with little going on in his life, he chronically suffers from the blues.  Although a gentle personality and generally amiable, dolefulness and sarcasm frequently seep through his soft smile.  The actor speaks directly to the audience as if confiding in us.  He makes us feel comfortable with him and interested in what he has to say.  Oddly, despite this being his favorite musical, he issues a lot of criticism.  But through it all, he makes us laugh.

Those viewers who loved listening to records and lived through the age of vinyl will recognize clichés from the old days, like lifting and setting the needle arm to select a track and the anticipation brought about by the static that precedes the track.  In one funny sequence, that many of us can relate to, Man in Chair plays the same section of a song over and over trying to decipher the lyrics.

Director Michael Ross has done a fine job of marshaling his resources in this production.  Two aspects of stage artistry particularly contribute to creating a period feel.  Rebecca Valentino deserves note for the bulk of ‘20s costumes that provide the overall look, and Liz Andrews’s choreography, including dances of the era, add to the feel.  Music directed by Sherrill Peterson backs singers admirably, but on several occasions on opening night, the band overpowered even singers with very strong voices.  Overall, this dip back into time offers an enjoyable time spent.

“The Drowsy Chaperone,” with music and lyrics by Lisa Lambert and Greg Morrison and book by Bob Martin and Don McKellar is produced by Sonoma Arts Live and plays at the Sonoma Community Center, 476 East Napa Street, Sonoma, CA through July 31, 2022.