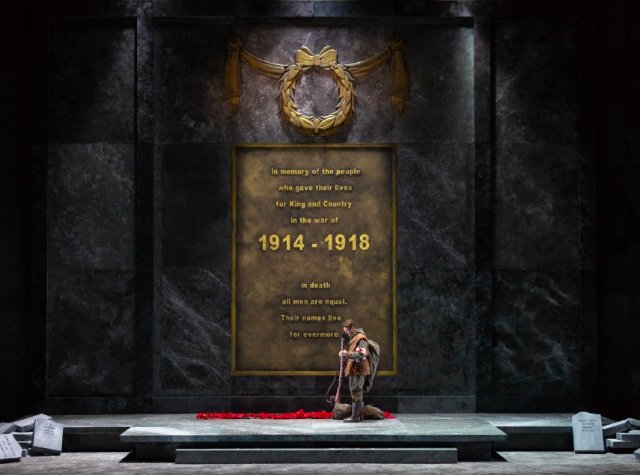 Silent Night by Kevin Puts presented at the Glimmerglass Festival 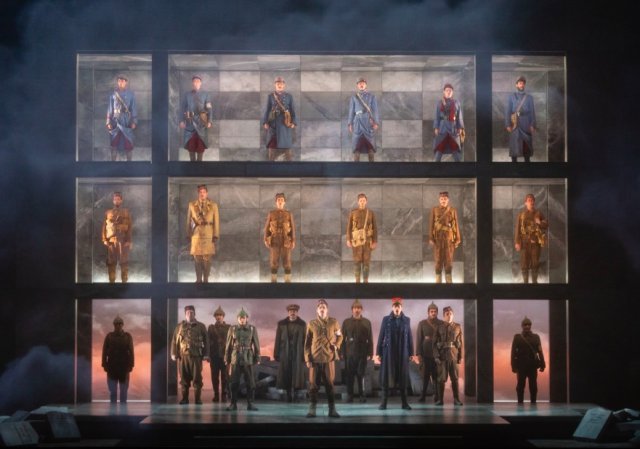 The three-tiered inset by Erhard Rom dramatically captures the story and the music. 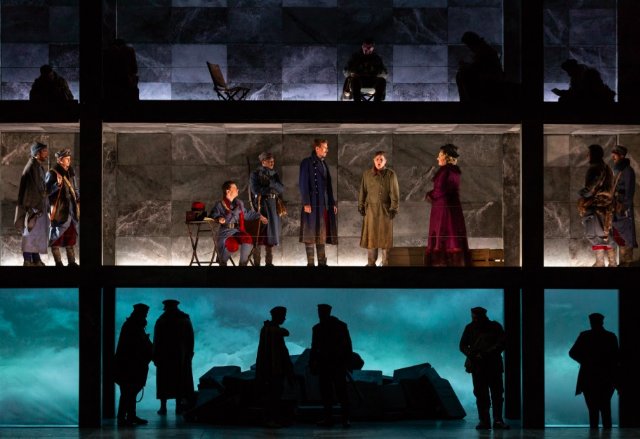 Lighting by by Robert Wierzel plays along with the story 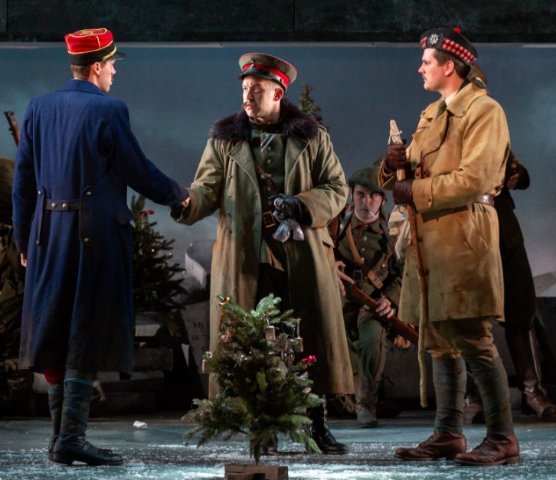 There is no enemy here. The Kaiser sent Christmas trees to the front. In the first year of a four year long War, he was convinced that there would be only one Christmas. For many soldiers, this was true. 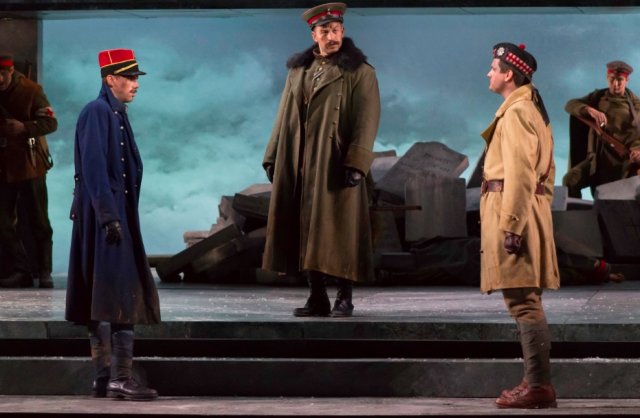 Can we suspend war and death? 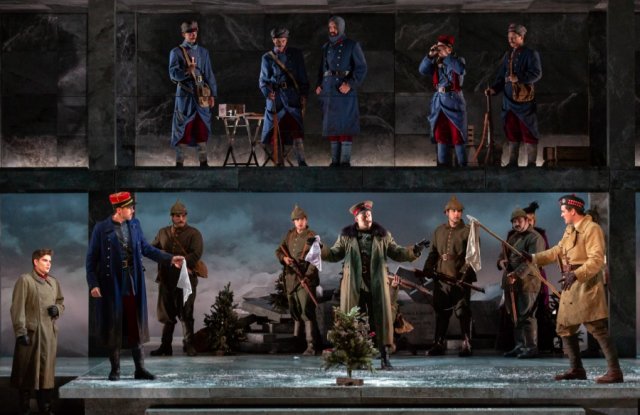 Triple truce. All the singers brought dramatic presence to this production. 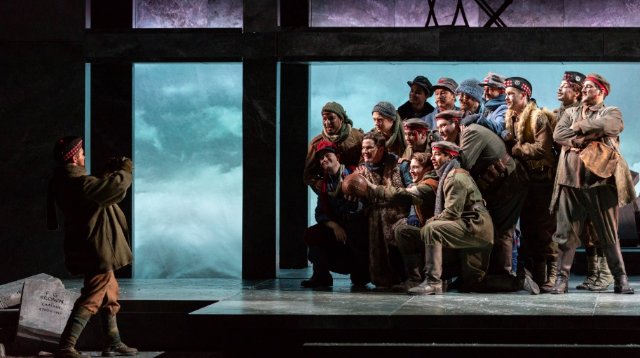 Photo opportunity on the battlefield 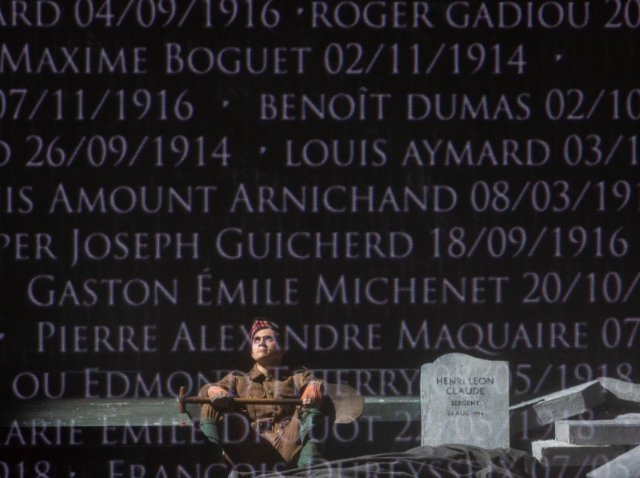 The main curtain lists the World War One dead 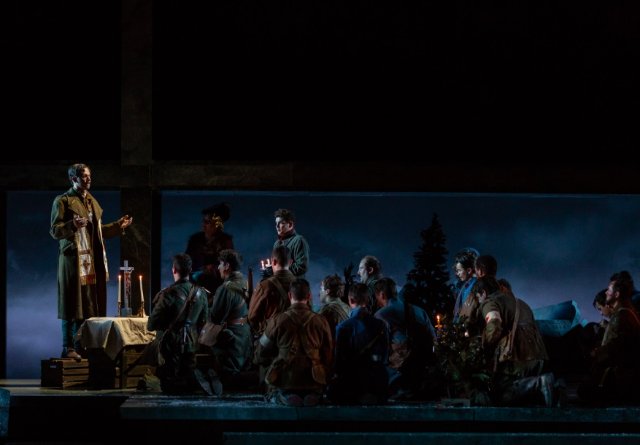 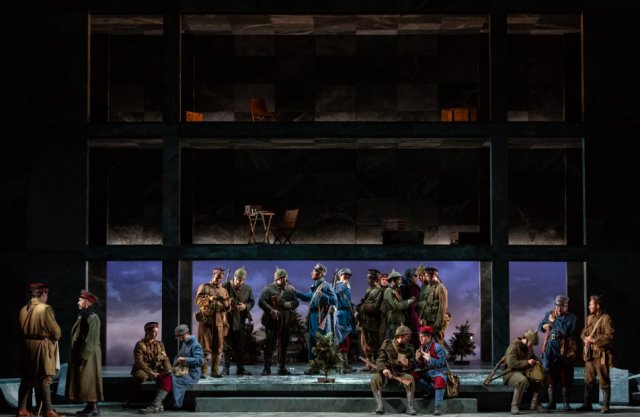 Enemies share pictures of loved ones. Chocolate and champagne is shared to celebrate. Troops are soloists and chorus sing beautifully. 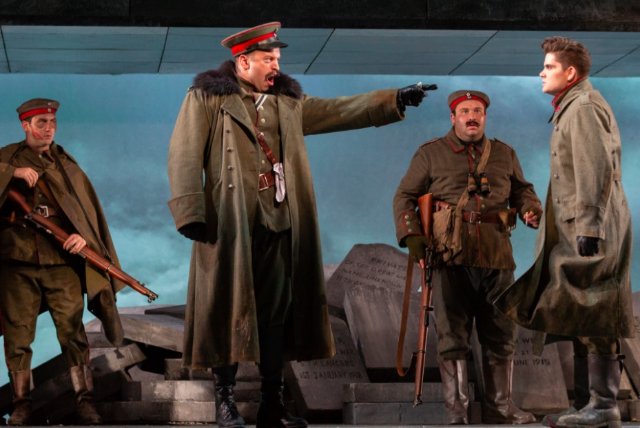 SInging is a high crime

Silent Night by Kevin Puts with libretto by Mark Campbell is being presented at the Glimmerglass Festival. Tomer Zvulen directs this complex tale to reveal each wrenching turn in the story of a 24 hour truce during the First World War. Nicole Paiement conducts to bring forth all the subtlety and beauty of Puts’ score.

Puts is both a fabulously gifted entertainer and a deep musical thinker. The music paints the scenes. The singers capture tones of the lush melodies and often harsh recitative which describes how war deprives us.

During the First World War, many mini-truces between enemy troops took place. They seem logical in retrospect. Placed in No Man’s Lands, often not far from their families, soldiers would find companionship with the enemy preferable to joining the death march.

One such truce was depicted in Christian Carion’s 2005 movie, Joyeux Noel. Puts and his collaborator Campbell created an opera closely based on the film’s story. The blood-soaked battlefield is represented by streaks of red entangling tree branches and blots of red across the backdrop. This war was so brutal that many men had to be removed from the battlefield and institutionalized in insane asylums.

Top brass of course could not approve these silent moments.  Temporary truce, designed as respite from gunshots and rocket explosions crowding the air, was impermissible.  Yet commanders on the ground would take a chance, hoping their actions would go unnoticed.

The opera opens on the stage of Berlin Oper, where a Mozart-inspired moment has been created by the composer. A married tenor and soprano, Sprink and Sorensen played handsomely by Arnold Livingston Geis and Mary Evelyn Hangley, perform the opera within the opera. It is interrupted when a German officer takes the stage to announce that War has begun.

The tenor will enlist, because he is a patriot. The soprano, his wife, must stay behind and entertain the top brass. Puts' composition with its 18th century flavor reminds us of lovely, orderly times long ago that are about to end. The collapse of the Austro-Hungarian Empire was precipitated in a time very much like our own. Everyone knew that they were living through an enormous upheaval. No one knew what the outcome would be.

The role of music in Silent Night is first dramatically revealed in the “Mozart opera.” In the movie, the tenor and his soprano wife quarrel about whether he should return to the front for Christmas. He tells her that he has promised his fellow soldiers he would sing. She can make it easier for him because she has a pass from the Kaiser.

When Sprink does sing at the front, it becomes suddenly clear to that we can return to our better, truer selves through music. Sprink and Sorensen sing to soothe the souls whose savagery is only surface.

The set by Erhard Rom is incredibly complex, reflecting the score. This set was inaugurated in the Wexford Opera Production also directed by Zvulen. Sections are introduced by postcards projected on a curtain. At the center of the set is a three-tiered structure. Each story is divided into a large central rectangular section and two smaller, balanced tails. When the three nationalities are separated at the front, their activities are separate too. Critical figures step forward to the lip of the stage to sing arias and advance the action. Zvulen gives us long shots and close ups like a film does.

The three-tiered structure has painterly elements. Bruegel-like earth tones and earthy characters awash on the decks and J.M.W. Turner's light-drenched scenes are often reflected. The music too paints. The combination of visual and musical textures heightens the impact of the unfolding drama.

Silent Night without the iconic title song focuses on another kind of silent night, a night when the loud shots of war and the cries of the dying cease. The composer looks at this silence from many angles. As an integral part of his composition, Puts celebrates still, silent moments, offering an opportunity for quiet contemplation.

The librettist makes an odd comment: When you have befriended your enemy you cannot fight him. This turned out to be not quite so. War re-commenced after 24 hours.

As we get a clearer vision of the totality of twentieth century music, Richard Strauss emerges as its most important composer. Kevin Puts is a clear heir. His complex rhythms, his use of percussion and brass build on Strauss.

Luxurious yet subtle harmonies singers relish in Strauss abound also in Puts. Both composers write well for the voice and its interface, embedded and underscored in orchestral music. Both composers make music a subject of their work.

Yet Puts sounds very much himself. There are passages that breathe, even with seemingly inanimate instruments playing without voices. Wonderful slides across the violins bridge phrases. Disharmonies evoke death squawks to irritate and heighten our attention.

Strauss worried that he was kitschy.  He was not. The sheer beauty pulled from performers indicates the solid structure both men provide, in addition to their gorgeous melodies.

The lone tone that ends the opera leaves room for thought and the embrace of profound pleasure.

Note: Silent Night will be produced at the Washington National Opera November 10-26.