A Sidebar to Chorus Line at the Colonial Theatre 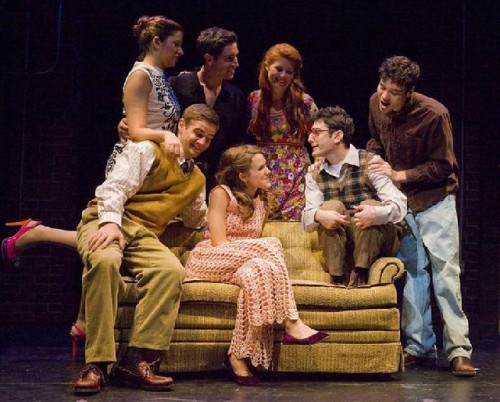 The cast of A Class Act. BTG photos. 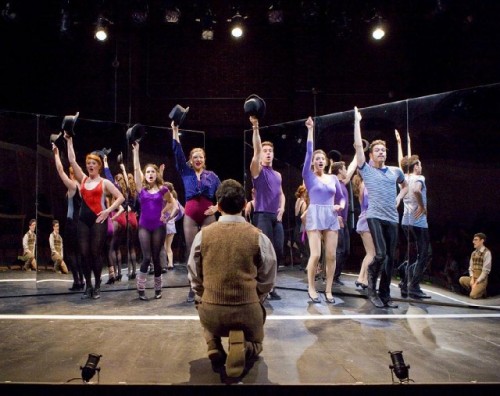 Watching a rehearsal of A Chorus Line. 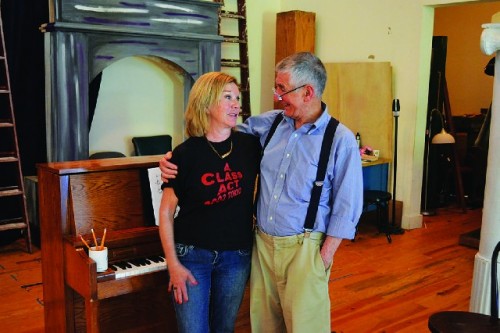 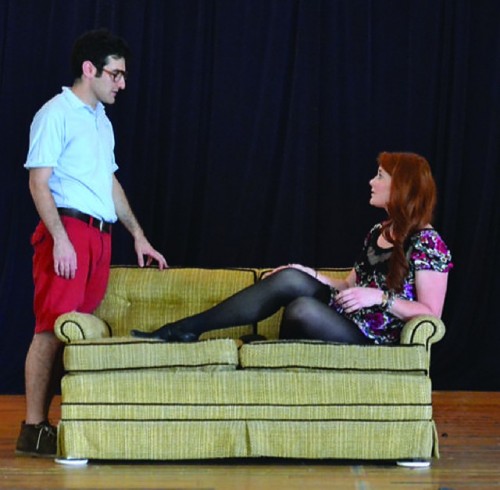 The seduction scene for "Mona." 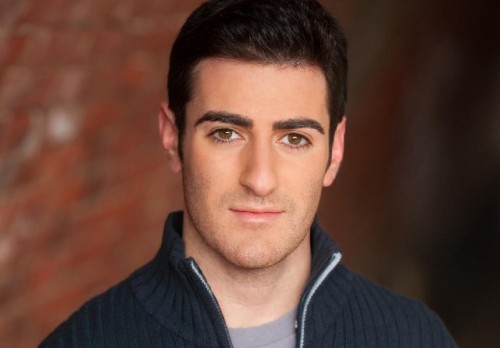 Ross Baum gave a superb performance in the leading role.

Edward “Ed” Kleban (April 30, 1939 - December 28, 1987) carved out a niche in theatre history by writing lyrics for the music of Marvin Hamlish in Chorus Line one of the great American musicals. With Hamlish he won the 1976 Tony Award for Best Original Score, and he shared the Pulitzer Prize for Drama in 1976 with Hamlisch and three other contributors to the musical.

Other than that singular success and its financial security, all of his other efforts such as Gallery, closed quickly or were never produced. A chain smoker, he died of throat cancer at 48.

His will established the Kleban Foundation which grants annual awards, each in the amount of $100,000 over two years, to the most promising librettist and lyricist in American musical theatre. His will also granted rights to his collection of unpublished songs to friends Avery Corman and Wendy Wasserstein with the request that they incorporate them into a new musical. Their attempts failed and the rights reverted to Kleban's longtime companion, librettist Linda Kline. She enlisted Lonny Price as a collaborator.

With a selection of his mostly unfamiliar material they created a tribute and biography A Class Act. After a two-month run at the Manhattan Theatre Club, it transferred to the Ambassador Theatre on March 10, 2001 and ran for three additional months. Kleban earned a posthumous Tony Award nomination for Best Original Score and Drama Desk nominations for Outstanding Music and Outstanding Lyrics.

It would seem that staging a production of A Class Act on the intimate Unicorn stage, in tandem with a smash hit run of A Chorus Line at Berkshire Theatre Group’s Colonial Theatre, was a no brainer.

With the fresh impact of those stunning lyrics in A Chorus Line we approached the sidebar production eager to know more about a genius who has devolved into a footnote of theatre history. The bitchy, swishy, brilliant, Michael Bennett character (Eddie Shields) describes Kleban as on a par with Steven Sondheim.

That certainly sets the bar high. While charged with energy and enthusiasm by a young, unseasoned, and wildly uneven cast in a cost conscious production, by the end of a long, and often tedious evening we have too much information.

It takes forever, mid second act, before we finally reach snippets of A Chorus Line. While the pace picks up and we are pulled in, by then, it is too little and too late to save a production that falls under the weight of its tough love and overreaching ambition.

There is a strong emotional finish as, after a gratuitous hospital bed scene, friends gather for a reading of his will. It was a lump in the throat finish, indeed there were tears in the eyes of one performer, of what proved to be a labored of love.

Stripped down to a more engaging 90 minutes, the length of the first of two acts, with those great songs and a more compelling delivery, this show has the potential to be an enduring chestnut and tribute to a unique and complex theatrical icon.

The diminutive Ross Baum as Kleban is the real deal and a complete package. His singing and dancing were top notch. Baum is about 90% of why we recommend this show. Just file this performance for future reference.

The trouble is that Baum got uneven support. As a part of the educational mandate of BTG this is a production confined to young actors in the summer program. While the show was open to review, with only a pianist to work with, it felt more like a rehearsal, preview, workshop, or class than a finished production. The young cast was given way too much material to deal with. The fault lies with the director, Robert Moss, who was unable or unwilling to make drastic but necessary cuts.

With the loophole of those incredible lyrics for A Chorus Line Kleban’s career in theatre was a colossal failure. Do we really need to spend more than two and a half hours learning why? Although Baum plays him compellingly we agree with the on stage comment that Kleban was his own worst enemy.

A neurotic mess actually. Looking at Baum I kept channeling Woody Allen. In addition to that death sentence of chain smoking he was neurotic, phobic, testy, insecure, border line psychotic, impossible to work with, and adept at turning friends into imagined enemies.

Amazingly, this nebishy guy had the knack with ladies. Just through chutzpah some pretty runty guys attract knockout women. I’ve known a few guys like that.

Some of the more interesting aspects of this production explore his relationships with women. There is his first true love Sophie (Anya Whelan-Smith). She is played with conviction as his emotional litmus, on again off again, years after their breakup. Quitting show biz she became a doctor and researcher.

They break up when she finds him in bed with Mona (Marie Eife) who is easy on the eyes but hard on the ears. Their seduction scene "Mona" could use more heat.

There is an emphasis on the classes he attended with the veteran Broadway composer and conductor Lehman Engel played with tepid conviction by Robbie Simpson. The class is assigned to write a “charm song.” In essence a catchy confection intended to be one of those tunes you whistle on the way out of the theatre. Kleban is developing the radical idea (fulfilled in A Chorus Line) that lyrics develop the characters and advance the plot.

While shy and not ready to present his work to the group he is goaded into performing his charm song which results in a non sequitor “Paris Through the Window.’’ In the crit that follows it’s shredded. Do we really need another song about Paris?

From the group emerges his enduring friend Lucy played poignantly by Rachel Balcanoff. He talks her into singing “Broadway Boogie Woogie” in an audition for Bennett.

Through nepotism Kleban had a truly hideous day gig at Columbia Records. It reminded me of that dreadful period of easy listening LPs. It was the era of the tasteless Mitch Miller and his Sing Along with Mitch kitsch. Consider an artist like Kleban prostituting himself to produce Percy Faith and “Polkas for Lovers.” Yuk. Better he should shoot himself or drive a cab.

From his student days his classmate and friend Felicia (Tessa Hope Slovis) has morphed into a CBS executive and his boss. She is conflated as a career woman, and vulgarian temptress. Everything about the character and its performance is off key. Slovis is a large woman and the wardrobe by David Murin doesn’t help her lost cause. Early on we encounter her in Pucciesque, printed tights and top. When she crashes the glass ceiling she is outfitted as an ersatz dominatrix, with a stiff, large, leopard skin collar that even a tough broad like Angelica Huston would have a hard time bringing off.

The costumes may reflect the taste and eccentricities of the period from the late 1960s through 1970s but mostly they were a confusing mish mash. Every time a woman made an appearance on stage she wore a new outfit. While, throughout, Kleban remained consistent in argyle sweater and drab brown pants. Murin kept hinting at Lucy as a flower child in endless variations of bell bottoms. Then in a see through, pink crotched pants and top outfit that I seem to recall from last year’s Moonchildren. It’s the kind of period piece that one is unlikely to forget.

If the costumes are mumbo jumbo then what to say about the music? This is the raison d’etre of the production and its Achilles heel. Often we just couldn’t hear those precious lyrics. The young performers, with all over the map capabilities, just weren’t able to pitch the songs. While in A Chorus Line, at the Colonial Theatre, we hear Kleban’s lyrics with that kick ass 13 piece pit band, at the Unicorn, the score was underwhelming with just a piano as backing.

There is also the issue of building a show around a selection of songs from failed productions with no natural threads of connective tissue. While the Hawaiian themed, grass skirts on the men with bare chests, "Gaugin’s Shoes," from Gallery was fun it just seemed patched in for the heck of it. Sophie was chilling on “The Next Best Thing to Love.’’ There was considerable potential for "Better," "One More Beautiful Song,"  "The Next Best Thing to Love," "Broadway Boogie Woogie," "I Won’t Be There," and "Self Portrait."

While Kleban’s legacy is secure for A Chorus Line the jury is still out on A Class Act.

It left me deconstructing the title. Does it mean class as in classy? Or class as in going to school?  In this production it can be taken either way. Which, at best, is a mixed blessing.