Merchant of Venice at Old Globe 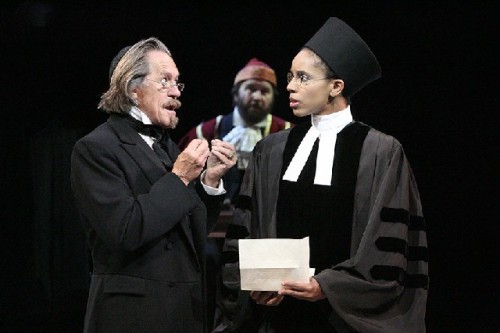 Anderson as Shylock and Krystel Lucas ~ Photos by Michael Lamont 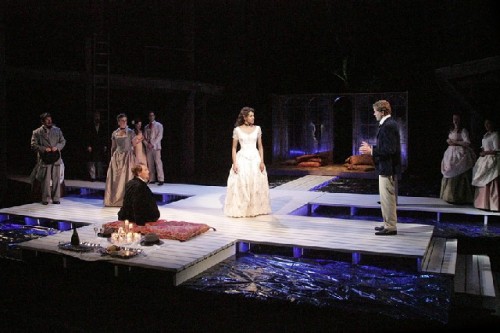 The cast of The Old Globeâ€™s Shakespeare Festival production of The Merchant of Venice, directed by Adrian Noble, June 9 â€“ Sept. 28, 2013. 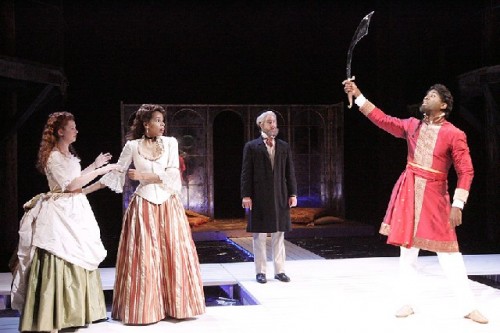 Danielle Oâ€™Farrell as Portiaâ€™s Servant, Krystel Lucas as Portia, Robbie Simpson as Balthazar and Nic Few as the Prince of Morocco.

The Bard of Avon is alive and doing quite well in San Diego these days thank you very much.  Especially now, since the Old Globe’s annual Shakespeare Summer Theatre Festival in the Lowell Davies Outdoor Theatre is in full sway.  Last week I reviewed the opening of  “A Midsummer Night’s Dream”, the first of two Shakespeare productions being presented in repertory this season.

The second production is Shakespeare’s ambivalent and oft misinterpreted story “The Merchant of Venice”, deftly directed by Adrian Noble.  Shakespeare scholars for centuries have debated the true meaning  of the Bard’s play.   For example, is it a corrosive tale of anti-Semitism reflecting the times and culture of 16th century Europe?  Or is it a tragic-comedy created by Shakespeare to bring differing cultures and religions into the softer and more acceptable spotlight of the stage – which was then the only form of public discourse and communication among the uneducated?

Shakespeare’s plays are always densely and richly plotted, with narrative threads that dangle all over the place; requiring neatly tied up ends.  In short, however, the tale might be condensed into a few of paragraphs beginning with … in 16th Century Venice, when a rich merchant Antonio (Donald Carrier) is in need of cash to lend to his best friend Bassanio (Lucas Hall), in order for Bassanio to pursue his romantic ambitions with Portia (Krystel Lucas), the daughter of the Duke of Venice (Charles Janasz), Antonio obtains a 3000 ducats loan from the local Jewish money-lender Shylock (Miles Anderson) with a promise to repay the debt within 30 days.

When Antonio defaults on his loan, Shylock, who has been publicly insulted and humiliated in the past by Antonio because of his religion, decides to demand a shockingly, gruesome, payment following the court’s decision in his favor.  Shylock delivers the now famous lines about “a pound of Antonio’s flesh” as full repayment.

In between all this money-lending and legal document machinations “The Merchant of Venice” also is a play about young lovers trying to pursue, connect, and marry.  There are plenty of tricky side roads and potholes that all take on the bumpy road of love, and our intrepid characters find most of them.  For example, Shylocks’s daughter Jessica (Winslow Corbett), wants to marry the Venetian Christian Lorenzo (Adam Gerber)  - a big No No over the last millennia.  Portia, the Duke’s daughter wants to marry Bassanio.  Gratiano, Bassanio’s friend, wants to marry Nerissa, the servant to Portia, and so on.  But the strictures of society and the authority of the parents are formidable obstacles to overcome in the 16th century.  Comedy is usually present in most of Shakespeare’s canon, but in “The Merchant of Venice”, the story of Shylock and Antonio with its overt anti-Semitic issues always trumps Shakespeare’s love stories that affect the other characters.

Miles Anderson’s portrayal of Shylock is the epitome of the Shylock’s of the past.  Under Noble’s direction, the production has opted for the more traditional interpretation.  Therefore, Shylock remains the heavy.  Lucas’ Portia, despite the text, manages to slip into her portrayal some traits of a 21st century woman.  Carrier’s Antonio, Hall’s Bassanio, John Lavelle’s Lancelot Gobbo, and Ryman Sneed’s Nerissa, along with Janasz’ Duke of Venice, and Triney Sandoval as Gratiano deliver finely judged performances.

The Old Globe Company of twenty-six performers makes for wonderful individual performances, and for a solid ensemble for all three productions in this season’s outdoor festival.

Players and directors alike over the years have taken liberties with the text and staging, often cutting and trimming it to suit their particular point of view.  This route is often referred to as “freshening the text” in an effort to justify the changes.  However, in the long run, the final arbiters of success concerning this intriguing tale, have always been the audience.  Come and judge for yourself.