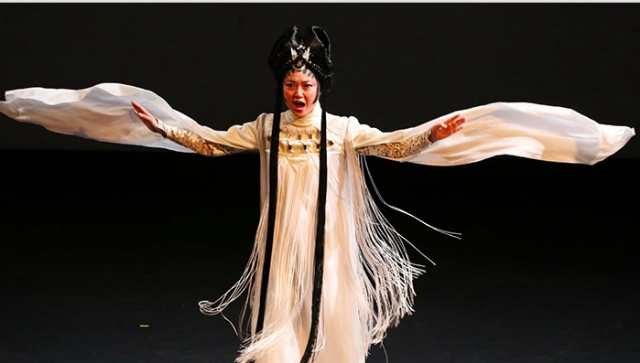 Qian Li, a monologist supreme, carries her song in dance, voice and costume. 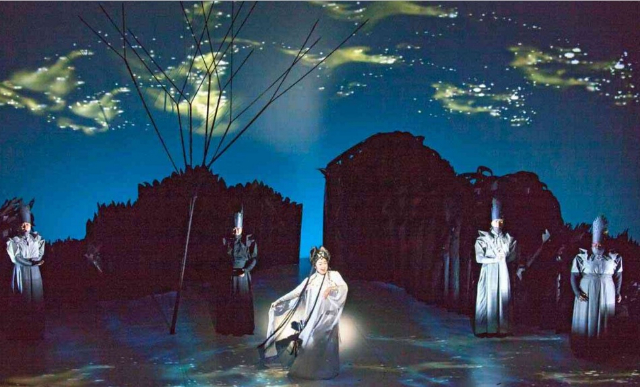 Fireflies in the sky. A black garden. 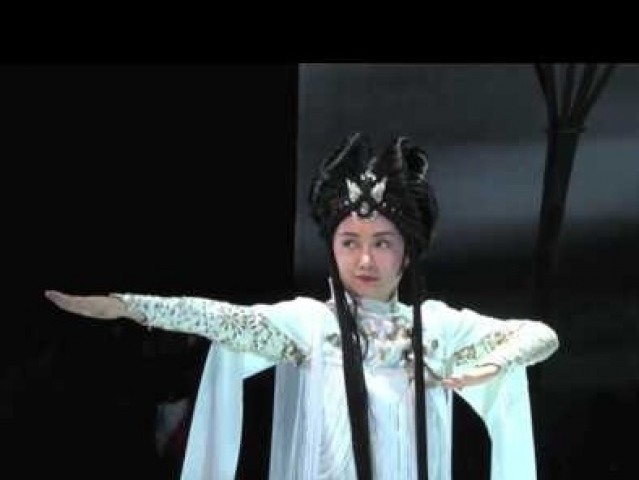 Gesture is essential in Chinese opera. 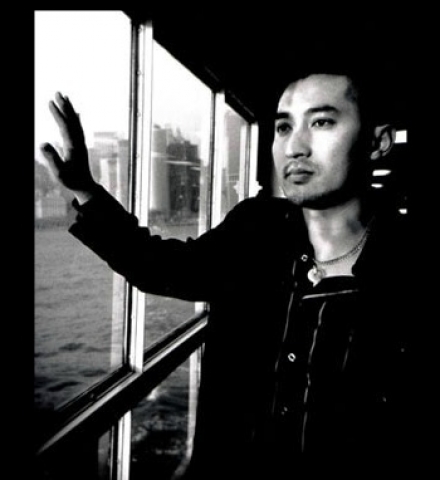 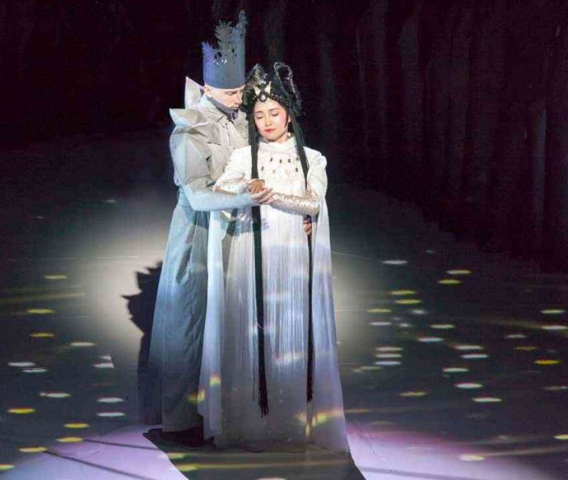 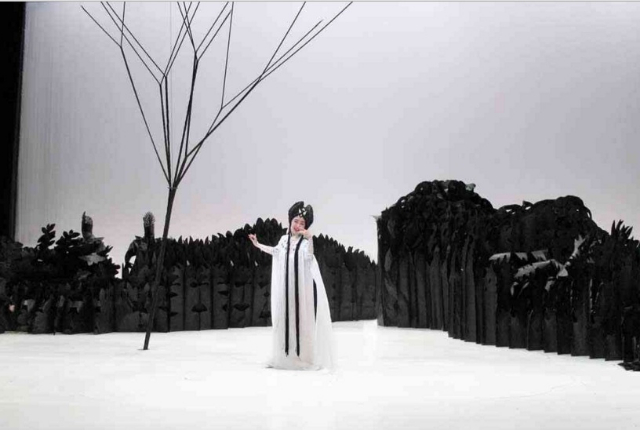 The Woman discovers a tree. 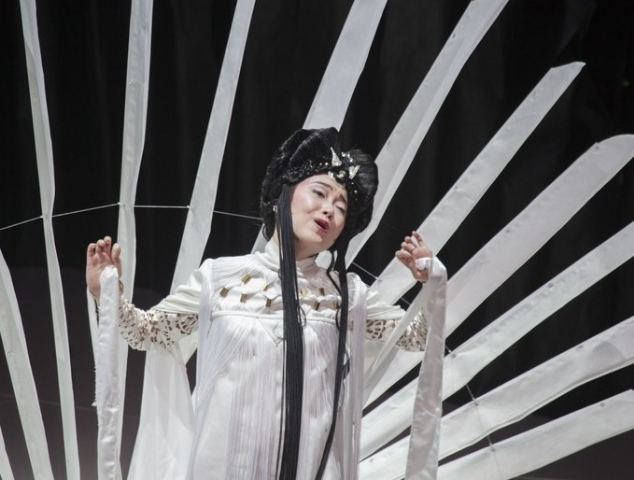 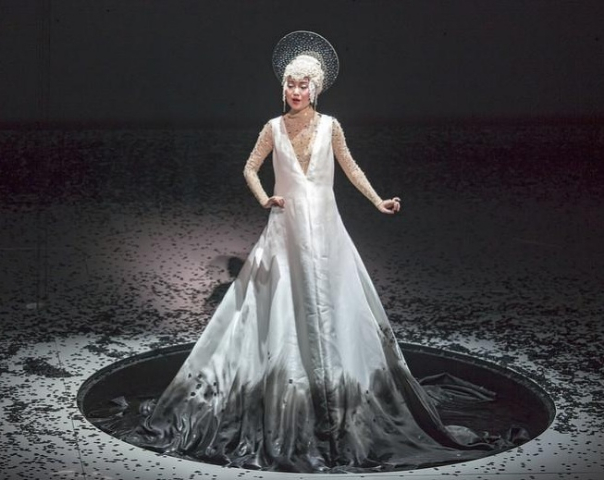 The Woman in a pool of dark ink.

Paradise Interrupted opens with what appears to be a sliver of light, perhaps a linear sound bar, an opening between worlds, stretched across a tiny opening at the top of the bottom third of the stage. In the beginning was...

A song is external to The Woman, who is on stage wrapped in darkness. As light expands, she becomes evident to us, moving in the tiny Oriental steps so familiar to opera fans in Madam Butterfly.

The Woman skims the surface of the stage, seeming to rise and fall as her knees bend and then erupt to full length

Singing the lead role of The Woman, Qian Yi, is suffused in white, with a white scarf floating over her arms to transport her from heaven to earth, death to life and back, and to the heart of her search for a return to paradise.

Eve never had the opportunity to go back to Paradise, perhaps because the Bible, a creation of Western thought, suggests that we can only live with one foot on a banana peel and the other in hell. The message here is very different. Even optimistic.

Spiritually, The Woman inhabits different spaces in the opera. In the beginning is the word, but there are no words without ink, the beginning and the end. Ink unifies The Woman and her song.

While she is suggested as generic, with no name, we readily identify with The Woman’s search for peace, which she finally finds out of the swell of passion and in the dream world of an afterlife.

While emphasis in Chinese opera is on costume and gesture, the scenery in this production is mesmerizing. In the dark garden whose entrance gate tempts, figures in black, like puppeteers, manipulate pop up plants and bushes. A stark tree trunk with skinny branches becomes laden with fruit as The Woman finds meaning.

Circles are important too. The Woman circles the central tree. Toward the end, she joins The Elements in a circle dance on a long journey reminiscent of Round and Round the Mulberry Bush. It is The Woman who will pop up in the end.

Yet in Paradise Interrupted, circles do not contain, but instead expand into an indeterminate emotional universe, which the composer calls dimensional. Mixing and matching East and West is one of the composer Huang Ruo's pleasures.  Ensemble FIRE can be cacophonous and celestial, the music held together by its string and percussive texture and the singers’ tones.

Costumes place us in a fantastical world. The crowns worn by the four men are cut-outs which hint at the jagged outlines of the garden plants. Guillermo Acevedo is credited with interactive videos. A drumbeat sets off a firefly’s explosion.  Spidery puffs at the edge of swelling clouds expand with the music.

Western orchestral instruments, violins, cello and double bass, are joined by the Eastern dizi, sheng and pipa. The dizi is a bamboo flute, adding a bright, resonant and humming tone. The sheng has 17 bamboo pipes and the pipa is an unusual four-stringed plucked instrument.

Huang Ruo talks about cross currents which do not move in one direction. Music lines do not go left and right, but rather are experienced as entering a space. We are surrounded by music. There are no motifs. The feeling is total.  There is something to be said for acting out in fantasy what one wishes for in reality.

The substantial tenor Yi Li, is Lover, Wolf and Element. The pure, rich counter tenor John Holiday, is the purest, most singular wind you’ve ever heard. Baritone Joo Won Kang and bass baritone Ao Li join in celestial chants. These men are all understandably on the cusp of major careers.

The emotional texture of Chinese opera suits the form deliciously. Like magical realism which was lofted in the recent production of Florencia en el Amazones at the revived New York City Opera, the universe is undivided.

Past and present, emotion and music all exist in one dimension. Music, drama and the story thread center around the expression of feelings as a protagonist proceeds through a life of the mind, body and heart at one and the same time.

The experience feels like one long breath, one image dancing before the eye, one thrilling tone filling the ear. It is extraordinary.