Fruma-Sarah (Waiting In The Wings) 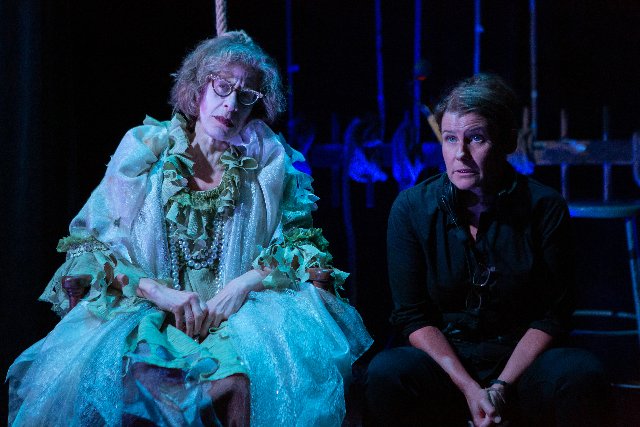 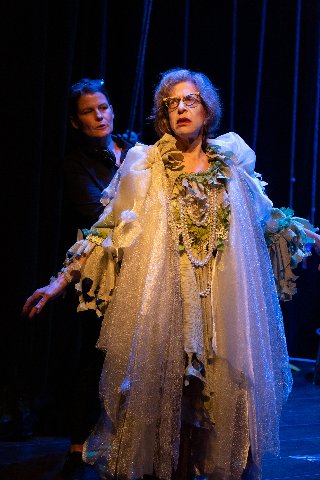 The very mention of the New York City’s own wildly popular actress and comedian Jackie Hoffman – she of 1000 facial expressions, bodily quirks, a score of well-placed adlibs, and a mesmerizing voice that takes you prisoner with a waterfall of precisely enunciated words – signals that somewhere lurking around a corner is yet another not-to-missed Hoffman Happening.

Well, the good news for Hoffman lovers is that the ever-glorious and incandescent Hoffman, along with fellow actress Kelly Kinsella, is back in the saddle again, and currently chewing up the scenery in E. Dale Smith’s two-handed serio-comedy Fruma-Sarah (Waiting In The Wings), at the Chelsea-based Cell Theatre through July 25.

Ironically, after spending some two pre-pandemic years Off-Broadway (2018-2020) playing the role of Yentle in the Joel Gray directed Yiddish production of Fiddler On The Roof, first at the Museum of Jewish Heritage, and then at Stage 42, Hoffman has returned to the neighborhood of Fiddler. This time as Fruma-Sarah, the late wife of the town’s butcher Lazar Wolfe.

For those who do not remember Fruma-Sarah – even I had to refresh my memory – Fruma, appears in Fiddler at the end of act one, as part of Tevye’s dream. Returning from the grave, for all of three minutes, Fruma makes a show-stopping, high above the stage, mid-air appearance. Upon hearing that Tevye’s youngest daughter, the twenty-year-old Tzeitel is to marry her late husband Lazar, she terrorizes Tevye by threatening to come to his daughter at night, and take her “by the throat.”

Building on this conceit, playwright Smith has turned Fruma-Sarah’s three-minute fly-in and fly-out role in Fiddler into a 75-minute, intermissionless play, in which a crazily swathed Hoffman, looking much like the Madwoman of Chaillot (thanks to the keen eye of costumer Bobby Goodrich), is seen waiting backstage for her cue to take to take to the stage.

During this wait, which is the entire play, Hoffman, playing Ariana Russo, an aging actress (she is a real estate agent when she isn’t on stage) is seen sitting backstage at a New Jersey community theater. She is tethered to a fly-system by Margo (the wonderful Kelly Kinsella whose role as Adrian’s backstage keeper, and for purposes of this play, her foil). It is Margo’s job to see that Ariana remains safe, sober and quiet while waiting for her cue to go on.

Between taking nips of bourbon from a silver flask, which she tries to hide in the folds of her gown from Margo, Ariana recounts her life in a series of wit and wisdom monologues, many of which rely heavily for their effectiveness, on Hoffman’s sure-fire delivery. Along the way, casually tossed about, are a litany of her thoughts and observations on Jews, millennials, Facebook, Trump supporters, gays, past and current cast members, people best encountered one at a time, and her ten-minute walk-on in a production of Ragtime.

Seriously turning inward, with a bit crying in her bourbon, we also hear about her two failed marriages (one husband, who she is still friends with, left her bed for Mateo, his young male office protégé), her one-bedroom apartment filled with IKEA furniture, her early theatrical successes which have now dwindled down to near nothing, and her ruptured relationship with her daughter. The latter due to a speech Ariana gave at her daughter’s wedding in which announces for all to hear that her daughter “needs to be sure that her husband is not a fairy.” This one had the audiences just about peeing in their pants.

FRUMA-SARAH (WAITING IN THE WINGS) runs July 1 - 25, Tuesday – Friday at 8pm, Saturday at 5pm & 8pm and Sunday at 4pm. Running time is 75 minutes, no intermission. Patrons are required to show proof of vaccination upon arrival and follow all current city, state and theatrical union mandated Covid safety protocols. Tickets are $35 - $57, available at www.SpinCycleNYC.com. Tickets are all general admission, with the least expensive tickets available on a first come, first served basis -- or pay a bit more and support the artists and organizations involved.