Macbeth the Scotched Play at S&Co.

Botched by Misdirection of Melia Bensussen 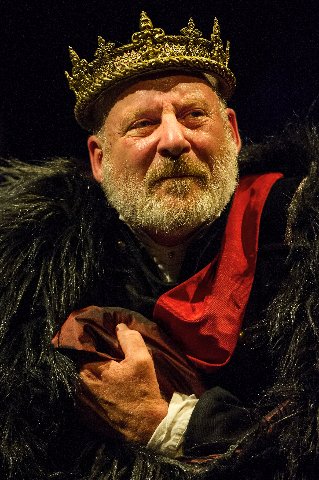 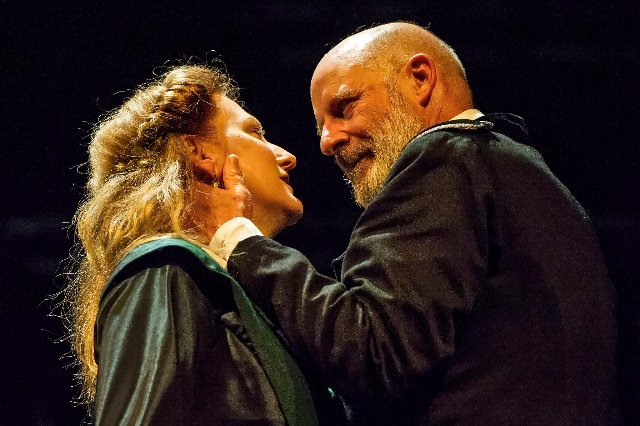 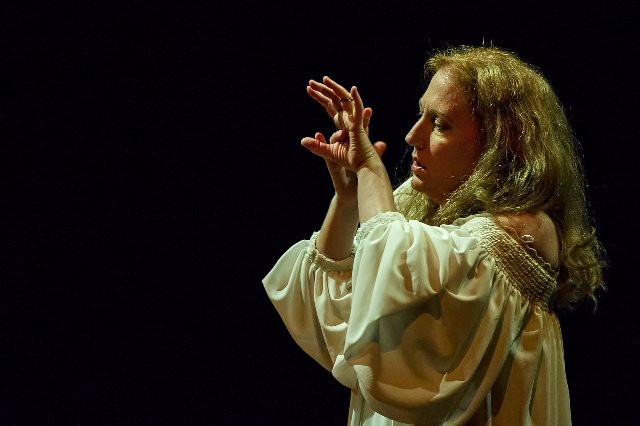 Out, out damned spot. 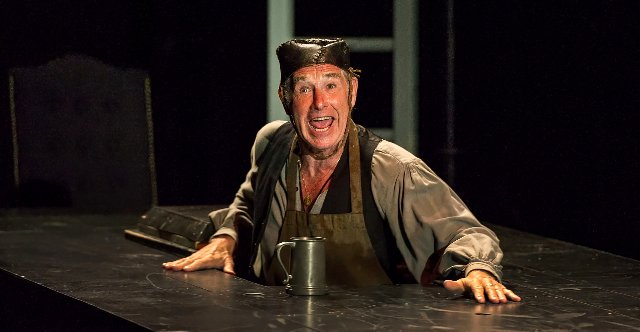 Nigel Gore in a popup as the Porter, 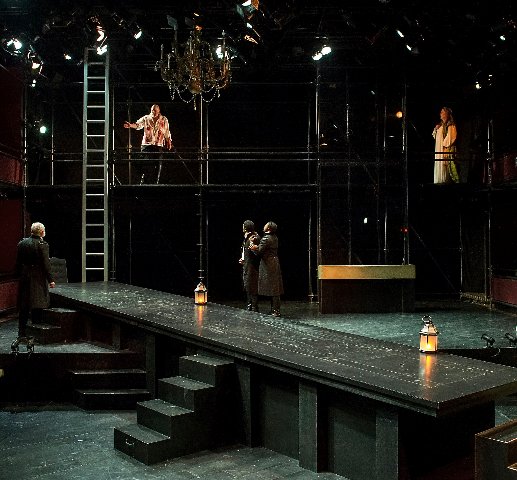 While Macbeth is referred to as “The Scottish Play” just as importantly it is Shakespeare’s most medieval one. An artist of England’s Elizabethan renaissance he reached back through the annals of history to shape a tale informed by witchcraft, superstition, blind ambition and its consequence of madness.

There is simplicity to the character, motivation and distorted moral compass of the man who would be king. That compares to the complexity and proto existentialism in the moral ambivalence of the later Hamlet.

In that regard Macbeth is the more simple and straightforward play. It is not difficult to convey but  challenging to create a compelling exposition of a seemingly good man and valiant warrior who is lured into catastrophic action.

The signature of the play, and its most exotic, audience appealing theatrical device, is the evocation of witchcraft. The treatment of the weird sisters is essential to the impact of any production.

Perhaps the most remarkable treatment of that element was the so called Voodoo Macbeth created in 1936 for the WPA by Orson Welles. With a black cast it was set in the Caribbean. Welles may have been influenced by the 1920 play The Emperor Jones by Eugene O’Neill. The protagonist is rendered mad, tormented in the jungle when a coup goes wrong. I discussed this at length with S&Co. veteran, John Douglas Thompson, who played both roles in New York.

The current production of Macbeth at Shakespeare & Company will be remembered for all but eliminating the witches. Without the compelling impact of that seminal encounter it is difficult fully to understand the trajectory of Jonathan Croy as an adequate but less than memorable Macbeth.

It is essential to understand how a simple minded, arguably not very bright warrior, is willing to accept, without critical analysis, manipulation by the witches. In a medieval context, arguably pre Christian, he fails to see the essential evil of their sorcery. As elements of prophesy come true he is ever more convinced of their veracity.

That sets him up for the self deception that a man of no woman born will be his nemesis. He is safe until Birnam Wood comes to Dunsinane. He is not clever enough to comprehend how that is possible.  If Macbeth is a dolt and oaf, there must be credible cleverness, and greater depth of ruthless ambition in the more interesting Lady Macbeth. In this production, under the misguided direction of Obie winner Melia Bensussen, she is underplayed by Tod Randolph in a manner as ephemeral as the disappearing act of the witches.

The great challenge and pleasure of theatre is as a living entity. As one of the most iconic of his plays we come to productions of Macbeth to experience what is done with it. The approach of this version is rooted in post modernism, deconstruction and a notion that less is more. In high school Macbeth and As You Like It were the first works by Shakespeare that we read and studied.

It was disconcerting to experience the not always effective changes and edits that the director has taken with a play so rooted in our DNA. The play has been trimmed from five acts to two, one hour acts. That’s within the comfort zone of a contemporary audience. Nine actors perform 14 roles compared to 28 as written by the Bard. This doubling and tripling has mixed results.

It is most successful when the remarkable Nigel Gore is first seen as Duncan who will be murdered in his sleep. He returns as an apparition and ersatz witch. He has a literal popup role as the hilarious Porter. During that dark and evil night, with thunderous knocking on the castle door, he is raucously inebriated. His patter has been updated in a lively manner. The audience roars in response to a joke about Viagra. Eventually, he admits Macduff (Thomas Brazzle) who is to awaken the king in order to continue their journey.

There were aspects of the production that were innovative and successful. The design of Cristina Todesco created possibilities of unusual sight lines and levels. There was a long platform with embedded spotlights that served as runway and banquet table. It was set as a thrust angle creating off-kilter vectors. That prompted engaging staging including full use of the aisles.

With a bare pipe upper level the actors were climbing ladders and shimmying down poles. To the rear was an enclosed translucent vertical box. It was a space for effects of water and light. The pregnant spirit of Hecate (Zoe Laiz), miced in a wiggy manner, with few lines gazes out at us through the mystical box. She has a brief other role as Lady Macduff.

It’s best to know the play or this production will be difficult if not impossible to follow. Expect to find the unexpected. It is unclear, for example, when and how Banquo (Ella Loudon) has been dispatched. Initially, we see him/ her in full uniform then with bloodied face and shirt then later, like Duncan, in a gossamer uniform signifying a spirit. During the banquet the spirit of Banquo is a surprise guest sending Macbeth into revealing fits.

The costumes of Olivera Gajic evoke the Civil War uniforms, with tunics and boots, of Union officers. The matching gowns of Lady Macbeth and that of Hecate are arguably 19th century American. The period and location is arbitrarily a long way in time and place from medieval Scotland. Perhaps this was a part of the overall strategy of disconnection and deconstruction of the director’s radical approach.

A mandate of the company is sustaining and training the classical traditions. In that regard, there was very fine work by younger, emerging actors.  Brazzle as Macduff, Deaon Griffin-Pressley as Malcolm and Gregory Boover (Young Duff and Fleance) made the very most of their roles. Mark Zeisler was most effective as Ross.

Just what happened in the bedroom of Duncan is a muddle. The dagger speech of Croy was crisp and articulate but short of revealing the state of mind of a host who, rather than protect his guest and lord, opts to murder him. Emerging disoriented with the bloody daggers his scheming wife proves to man up. Her subsequent descent into madness is less than credible. The iconic “Out, out damned spot” was numbingly underplayed.

It is the prerogative of a director to make judicious nips and tucks.  It is mind boggling, however, that Bensussen ends the first act with the banquet scene and then repeats it to open the second act. What on earth was she thinking? It was a decision seemingly appropriated from television. During the dozen episodes of a series, it is usual for each episode to begin with a recap of the prior week. But returning from intermission, hitting the reset button, is an insult to our patience and intelligence.

One hunkered down anxious for an end of this scotched production. Actually, there was an enjoyable acceleration as Burnam Wood did indeed come to Dunsinane. Trapped and cornered we see Macbeth, like the beginning of the play, come full cycle to his best. He learns in passing, with no visible reaction, that the queen is dead. As a man of action he will go down swinging.

Driven by false prophesy and ruthless ambition he was brutal enough to seize power. But then fails utterly as a ruler. What about that sounds familiar?

The fight coach, here credited as “violence designer” is Ted Hewlett. He has choreographed an exciting duel between Croy and Brazzle. While Croy was the older of the two he gave as good as he got. We gasped when Brazzle was flung across the stage. In  close combat he managed to slip a shiv into the ribs of the pretender/ king.

Exiting the performance one wondered if, perhaps, the play had been more skittish than Scottish.