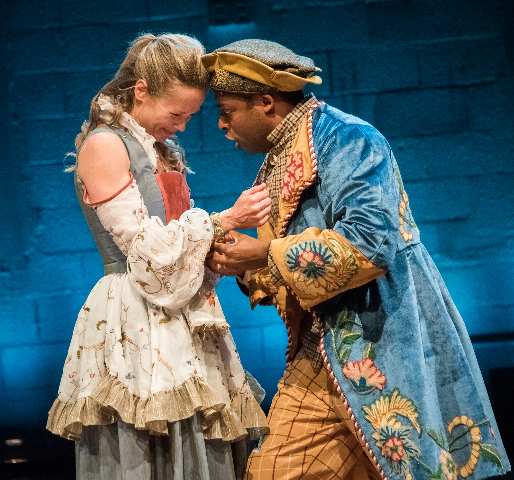 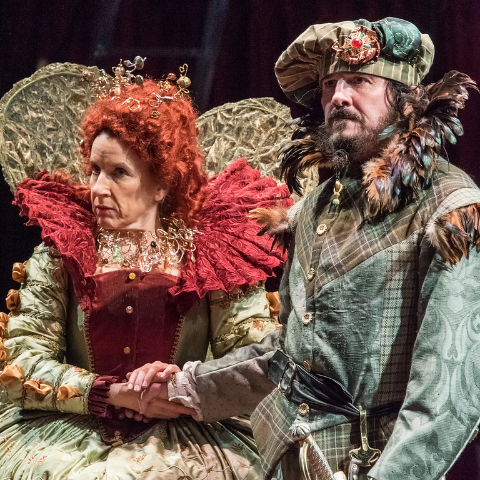 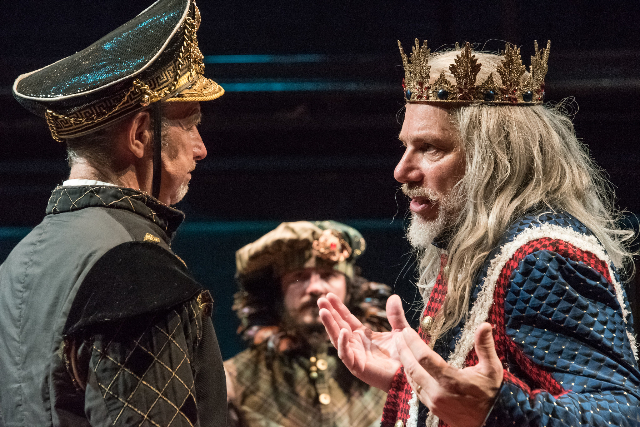 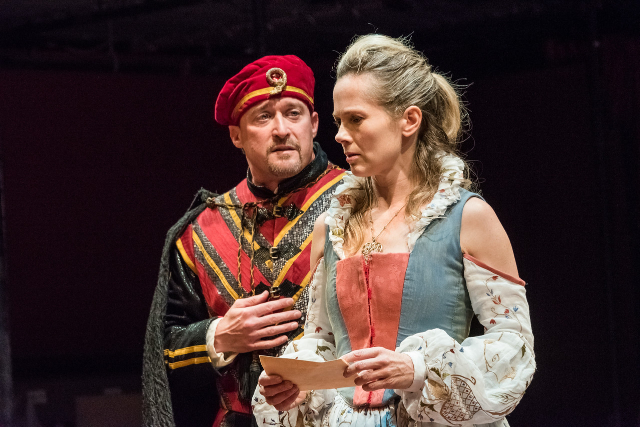 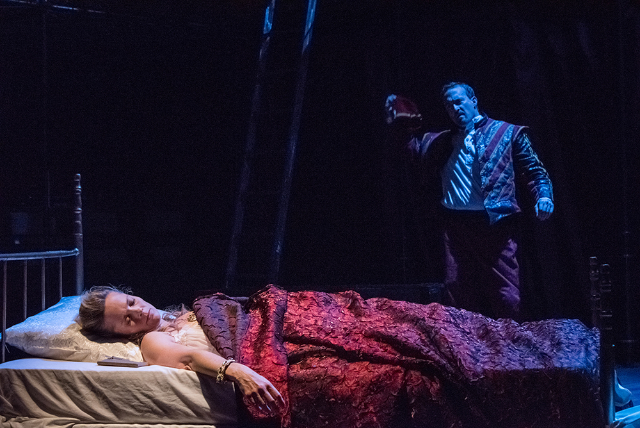 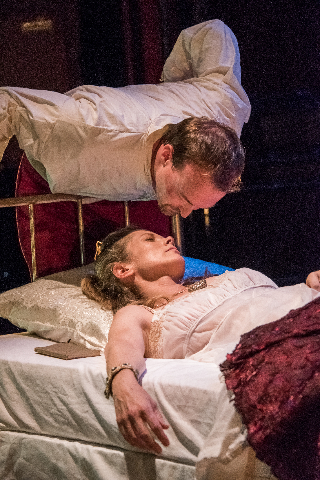 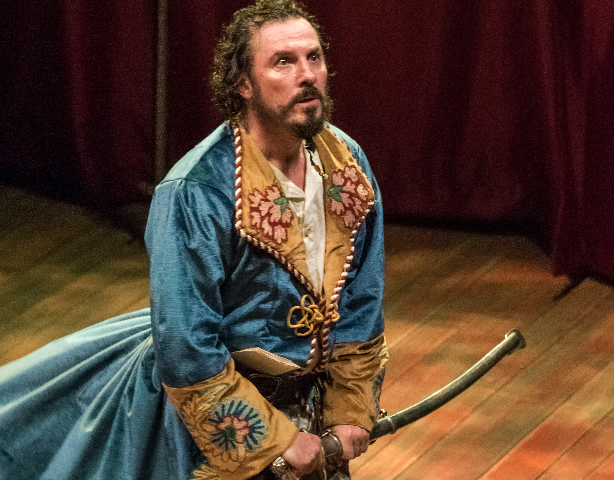 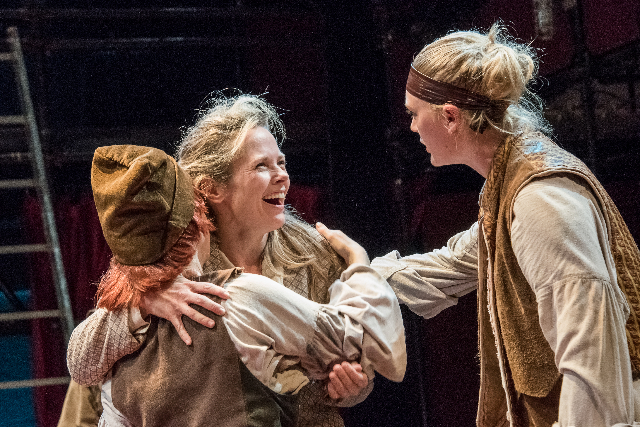 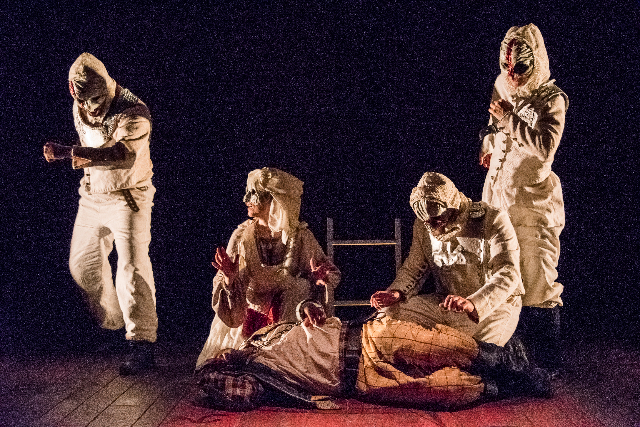 Cymbeline, is among the least produced plays by William Shakspeare (1564-1616). On many levels it is one holy cockamamie mess. There are so many threads, characters. sub plots and tom foolery that it's a meltdown to follow.

It is, however, that helter skelter, welter of confusion, particularly quick changes of players with multiple roles, that makes this a total bonkers delight. As gamely and brilliantly directed by Tina Packer it's just fun, fun, fun till Daddy takes the T-Bird away.

This is the must see show of the Berkshire theatre season and may be among the handful of most hilarious comedies ever presented by Packer or the company she founded.

During remarks following opening night, a jubilant and triumphant Packer informed us that with this production she had now completed the cycle of directing the canon.

Dare we say that she saved the best for last. The play, with its many confusions, is not on the short list of his best and most popular works. There is speculation about his state of mind at this late date in his career (1609).

There are arguments that he was bored or washed up. Instead of writing something fresh and new he created what has been called his "everything but the kitchen sink" play. Scholars have identified as many as 26 signifiers of his prior works.

As the masterful critic and wag, Dr. Samuel Johnson put it.

"This play has many just sentiments, some natural dialogues, and some pleasing scenes, but they are obtained at the expense of much incongruity. To remark the folly of the fiction, the absurdity of the conduct, the confusion of the names and manners of different times, and the impossibility of the events in any system of life, were to waste criticism upon unresisting imbecility, upon faults too evident for detection, and too gross for aggravation."

Given the advances of post modernism and critical thinking one might argue that, rather than a decline, he was presciently deconstructing his prior work. Until now nobody quite knew what to make of it. Is it a tragedy, romance or comedy? Packer has conflated all of the above in a manner that has us rolling in the aisles.

If, for whatever reason, he was cutting and pasting with Cymbeline there was a transition from the Renaissance clarity of the previous work (evolved from the medieval Macbeth) to an advance to the artifice and surreal mannerism that informs his most uniquely different, final complete play The Tempest. In that evolution Cymbeline may be viewed as transitional, a breakdown preceding a breakthrough. This is a familiar process in the stylistic evolution of artists.

It's complicated. For that let's use the company's summary.

"Cymbeline is the King of Britain and he has three children, a daughter, Imogen, and two sons, Guiderius and Aviragus. The two boys have been missing for a long time and appear in disguise as Polydore and Cadwal. They have been raised in the woods by Balarius, a banished lord, who has kidnapped them and educated them into gentlemen.

"The Queen is Cymbeline’s second wife, a power-hungry and scheming woman who wants Imogen to be killed so that she can get her hands on her inheritance for her son, Cloten. Cloten is a cloddish, nasty young man, who wants to marry Imogen so that he can inherit the throne.

"However Imogen has other plans. She falls in love with Posthumus Leonatus, a noble young man, and marries him in secret. Their love is tested, betrayed and finally redeemed.

"The play's themes of truth triumphing over falsehood, good over evil, are exemplified in the life of the heroine, Imogen.

"Appearance and reality infuses the play - there is magic and mischief and nothing is as it seems."

Ok, that's what it's about but hardly a spoiler.

There are nine wonderful actors on stage merging S&Co. revered veterans and emerging artists. All told they portray a mashup of 25 characters. There is razzle dazzle as the change of a robe, wig or prop morphs one character into another. There is no attempt to disguise any of these transitions which actually contributes to the net humor.

While Packer is credited as director, as she stated last night, this was truly a team effort and indeed it takes a village of artists to create such a vivid and enduring masterpiece.

The actors, from leads to bit players are flawless and compelling. The language is fluid, articulate and suitably poetic. One feels the magic of the writing set onto the performers with stunning clarity.

With production values the company has gone all in. The costumes of Tyler Kinney are well suited to those quick change transitions and enhance the individuals. The sound design of David Reiffel expands our imagination of time and space. The props, including a severed head, are terrific but I am not sure who to credit. With the fight coaching of Jason Asprey and choreography of Kristin Wold there was fluid action  and movement that kept us absorbed and diverted.

Then there are the performances. OMG! What an abundance of riches.

As always Jonathan Epstein (Cymbeline and others) and Nigel Gore (Belarius and others) were utterly masterful. They well represent the core of great artists who have been with the company seemingly forever.

We much appreciated the pithy off script asides of Jason Asprey. As the would be heir to the throne, Cloten, he was a wonderfully detestable wanker. There were hilarious moments when he would respond to audience reactions with ad lib "Moi?" gestures. That brought the house down.

As Imogen/ Son of Leonatus the superb Tamara Hickey ran through a rollicking gamut of emotions from tender lover, to wronged woman, tough and resourceful survivor. She also is disguised as a boy which is a favorite trope of the Bard. Of  course on the Elizabethan stage that meant a boy playing a girl disguised as a boy.

A particular delight in attending S&Co. over the years is the consistent development of emerging artists. There is always that thread of familiarity. Particularly notable was Thomas Brazzle taking on a more prominent and challenging role.

With two on the aisle seats near the thrust stage there was a constant rush of actors next to us. You could reach out and touch the players.

That greatly enhanced our up close and personal take on a whopper of a performance.